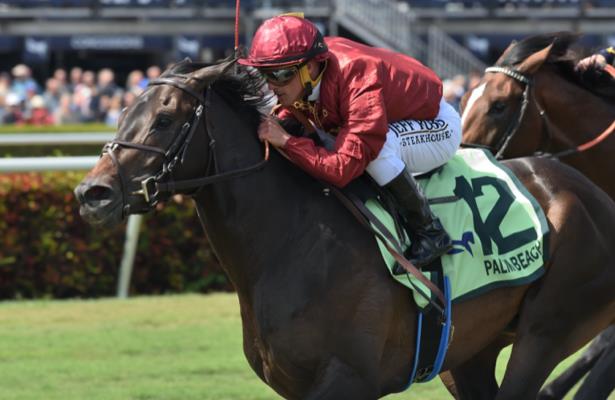 The Fountain of Youth Stakes undercard produced an assortment of well-bred runners, including a budding turf star in Vitalogy and a maiden winner from the family of champion Tepin. Let’s take a closer look at their pedigrees.

In his 3-year-old debut, Vitalogy cleared the field to earn his first graded victory in the Palm Beach Stakes (G3) by a length over the Gulfstream Park turf. The Brendan Walsh trainee traveled 1 1/16 miles in 1:41.86. Last year, Vitalogy placed in the Summer Stakes (G1) and Bourbon (G3). He has hit the board in four of five starts and has earned $173,632.

Pedigree: Vitalogy has a miler pedigree and may test those limits running around two turns this season.

Group 1-winning turf sprinter No Nay Never has carried on his sire Scat Daddy’s legacy at stud. The young stallion went to stud in 2015 and already has 19 graded/listed winners, but only five in North America. Like their sire, No Nay Never’s progeny are strongest as sprinter/milers.

Vitalogy is the first black type earner in his immediate family. Class skips to the third and fourth generations in his distaff line. Arkansas Derby hero and sire ArchArchArch and Grade 1-winning turf veteran Bullards Alley are part of the family.

(Kantharos - With Elan, by Offlee Wild)

Benefiting from a well-timed ride by Edgar Prado, With Verve made a last-to-first move to capture the Hutcheson Stakes at Gulfstream Park by a neck over multiple stakes winner Shivaree. The Larry Bates trainee traveled six furlongs in 1:11.44. With Verve has won or placed in five of eight starts and has earnings of $135,940.

Pedigree: With Verve has a sprinter/miler pedigree.

Kantharos proved himself as a stallion in Florida with precocious, yet determined stakes winners. His success led to a Kentucky relocation.

With Verve is the first black type earner in his immediate family. The unraced With Elan is a half-sister to stakes-winning sprinter Wise Gal, plus stakes-placed miler Good and Proper. With Verve’s second dam, Spirited Game, is a multiple stakes earner of $270,562 in 30 starts.

Shivaree battled down the stretch in the Hutcheson Stakes but was bested by With Verve in a blanket finish. Shivaree previously captured the Buffalo Man and Limehouse Stakes and was recently second in the Swale (G3). The Ralph Nicks trainee has hit the board in six of nine starts with earnings of $194,055.

By the multiple stakes-winning sprinter Awesome of Course, Shivaree is the fourth starter and fourth black type earner in his immediate family.

His full brother, Twotwentyfive A, captured two legs of the Florida Sire Stakes series and has earned $311,628 in 22 starts. Shivaree’s full sister, Pantyhose, finished third in the Desert Vixen, the first leg of the Florida Sire Stakes series. Half-brother Garter And Tie is a multiple restricted winner with earnings of $384,940 from 14 starts. Another half-brother, D N A Approved, is stakes-placed. Their dam, Garter Belt, is a multiple stakes-winning miler. She’s a half-sister to multiple Grade 1-winning warrior Jackson Bend. Others in this illustrious family include stakes veteran Grande Shores, an earner of $665,689 in 70 starts, plus multiple graded winner Fort Loudon.

(Into Mischief – Azara, by More Than Ready)

I'll Fight Dempsey captured his debut at Gulfstream Park on Saturday. Sent off as the favorite in a field of 10, I'll Fight Dempsey used his natural speed from the rail and made all the pace under John Velazquez, galloping under the wire 2 1/2 lengths in front. The Todd Pletcher trainee got six furlongs in 1:10.64.

Pedigree: I'll Fight Dempsey has a miler/middle-distance pedigree and may handle multiple surfaces.

I'll Fight Dempsey is the first foal out of Azara, an unraced half-sister Tepin, who earned Champion Turf Female honors in 2015 and 2016. Azara is also a half-sister to multiple graded veteran sprinter/miler Vyjack. The 2001 Maryland Champion Sprinter Disco Rico is also part of the family.

Santos Dumont graduated in his second start at Oaklawn Park on Saturday. Ricardo Santana Jr. kept Santo Dumont on the outside, stalking three wide, then the pair took over around the turn and flew home by 1 3/4 lengths. The Steve Asmussen trainee finished a mile in 1:38.27. The Don Alberto Stable homebred just missed the victory by a nose in his initial start.

Pedigree: Santos Dumont has a miler/middle-distance pedigree, and he may go farther with maturity or over the lawn.

Santos Dumont is the third foal and first winner out of the stakes-winning miler Snow Fall. The mare earned $197,443 in 15 starts. Her half-sister, Upperline, is a multiple graded winner from 1 1/16 miles to 1 1/2 miles in the Midwest and was victorious over all surfaces. Upperline bore English listed winning sprinter War Secretary. Santos Dumont’s third dam is turf router and Italian Oaks heroine Ivyanna.