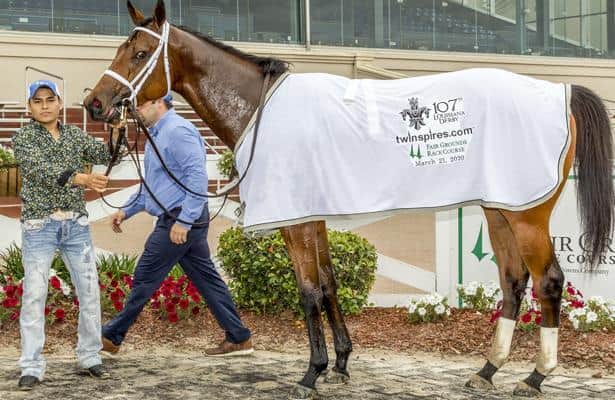 Wells Bayou jumped to the top of the 2020 Kentucky Derby leaderboard with his Louisiana Derby (G2) victory, and it should come as no surprise considering the colt’s pedigree is filled with classic winners. His stablemate, Bonny South claimed the top spot on the Kentucky Oaks leaderboard a race earlier in the Fair Grounds Oaks (G2), as we continue introducing bloodlines of emerging 3-year-olds.

Wells Bayou had it his own way on an uncontested lead in the Louisiana Derby, capturing the Grade 2 event by 1 1/2 lengths. The Brad Cox trainee traveled the Preakness Stakes distance of 1 3/16 miles  in 1:56.47, just missing the track record of 1:56.20, set by Half Magic on March 21, 1977. Wells Bayou has won or placed in four of five starts, with earnings of $845,293. He heads the Kentucky Derby leaderboard with 104 points.  The Arkansas Derby (G1) on May 4 is possibly next.

Pedigree: Wells Bayou has a classic-oriented pedigree with Preakness Stakes connections. His sire, two-time champ Lookin at Lucky, captured the 2010 Preakness, while his dam sire Hard Spun was third in the 2007 Preakness behind Curlin and Street Sense.

Wells Bayou is the first foal out of a lightly raced allowance class mare. Whispering Angel, who won two of three starts, has a 2-year-old filly named Romy by Karakontie and a new unnamed filly by Army Mule.

(Munnings - Touch the Star, by Tapit)

Patiently handled by Florent Geroux, Bonny South made a last-to-first move in the Fair Grounds Oaks, going away under a hand ride to win by 2 1/4 lengths. The Cox trainee got 1 1/16 miles in 1:43.57, with the Chestnut filly improving to 3-for-4 having banked $323,350. She sits atop the Kentucky Oaks leaderboard with 100 points.

Munnings is noted for siring sprinter/miler types. Out of 33 graded and listed winners, just five have been successful at nine furlongs, and one, I’m a Chatterbox, is a winner at 10 furlongs. Bonny South is bred on the same Munnings/Taipt nick as Finite, who she defeated Saturday.

Like many of the Juddmonte fillies, Bonney South’s distaff line won internationally. Bonny South is the second foal and first black type earner in her immediate family. She has 2-year-old full sister named Sun Path and an unnamed yearling full brother.

Touch the Star wasn’t interested in being a racehorse, but her royal bloodlines indicated she'd be a good producer. The mare’s most accomplished half-sister is French Group 1-winning miler Etoile Montante, who spent her 4-year-old season in the U.S. Etoile Montante won the Palomar (G2) and Las Cienegas (G3) handicaps, and she placed in several other stakes, including the Matriarch (G1). Etoile Montante bore Starformer, a multiple graded turf mare who was successful from nine to eleven furlongs.

Mystic Guide graduated by an eye-catching five lengths on Saturday at Fair Grounds. The Michael Stidham trainee traveled 1 1/16-miles in 1:43.66.

Pedigree:  The late-blooming Godolphin homebred has the pedigree to love classic distances.

Ghostzapper’s offspring win at all distances. Some may flash talent as 2-year-olds, but the bulk start to shine in the summer and fall of their 3-year-old season. Many compete at the graded stakes level as older horses.

Mystic Guide is the fourth foal to race out of Music Note. None of his half-siblings own blacktype, but the most accomplished, the Street Cry gelding Ventura Highway, earned $217,925 in 66 starts. Their dam, Music Note, owns five Grade 1 victories from seven to 10 furlongs on the main track. She earned $1,615,000 in a dozen starts.

Mystic Guide’s third dam is 1978 co-champion 2-year-old filly It’s in the Air, who won or placed in 22 graded stakes during her 43-race career that spanned four years.

Barclay Tagg unleased a possible Kentucky Oaks prospect on Sunday at Gulfstream Park. Breaking from the outside, Pleasant Orb followed the pace three-wide under Joe Bravo. She challenged the pacesetter Sneer, down the stretch, and prevailed by a half-length.  Pleasant Orb has a win and two seconds in her three-race career.

Pedigree:  The Charles Fipke homebred has a middle distance/classic pedigree, and she descends from Phipps Family royalty.

Kentucky Derby winner Orb hasn’t lived up to expectations at stud, having sired only five graded/listed winners. His stakes progeny win from six to nine furlongs. Orb's daughters are more successful than his sons, and the stallion may yet make his mark as a broodmare sire.

Pleasant Orb is the 10th foal in her immediate family. Her half-brother Hereditary is multiple stakes-placed from six to nine furlongs. Pleasant Orb’s half-sisters are good producers; their offspring include Guarana, heroine of the Coaching Club American Oaks (G1) and Acorn Stakes (G1), her half-sister Magic Dance, who won last year’s Debutante Stakes (G3) at Churchill Downs, plus four stakes-placed sprinter/milers lead by Tale Of S'avall.

Long Weekend outclassed a field of sprinters on Saturday in Oaklawn Park’s Gazebo Stakes. Joe Talamo sent the colt to the lead, and the pair opened up to win by 4 3/4 lengths. The Tom Amoss trainee zipped six furlongs in 1:09.77. Long Weekend has captured three of four starts and has earnings of $133,928.

After eight years at stud in Kentucky, Majesticperfection was sold to Uruguay. The son of Harlan’s Holiday leaves behind 15 graded/listed winners as his legacy, including 2015 Kentucky Oaks heroine Lovely Maria. Majesticperfection’s offspring are strongest as sprinter/milers, and only two of his offspring have won at nine furlongs.

Long Weekend is the third foal to race and first black type earner in his immediate family. He has a 2-year-old half-brother by Ghostzapper and an unnamed yearling half-sister by More Than Ready. Liza Too is a stakes-placed sprinter who earned $116,448 in 13 starts. She’s a half-sister to the speedy Paulassilverlining, a multiple Grade 1 earner of $1,516,230. Their half-brother, Dad’s Caps, is a millionaire and back-to-back winner of the Carter Handicap (G2).

Who could use a little #MondayMotivation?