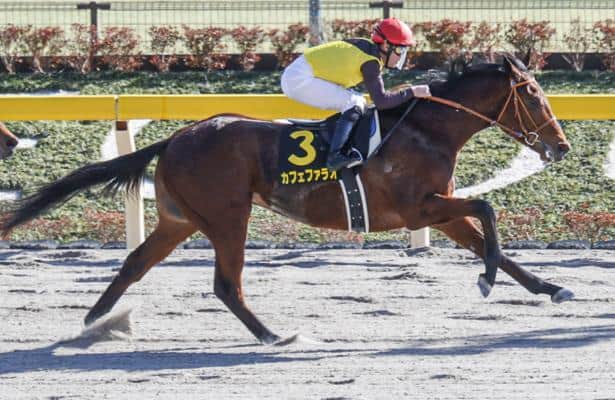 This week’s 3-year-olds to know are led by the sensational Japanese stakes winner Café Pharoah, who on Sunday added his name to the list of 2020 Kentucky Derby hopefuls. Let’s take a closer look at their bloodlines.

The colt made a last-to-first move in the one-mile Hyacinth Stakes at Tokyo Racecourse, which was particularly impressive after he missed the break in the 14-horse field. The Noriyuki Hori trainee remained undefeated and earned 30 qualifying points to take the lead on Japan’s road to the Kentucky Derby with one prep race left.

Pedigree: Cafe Pharoah has the breeding to handle classic distances.

Triple Crown champ American Pharoah is on his way to continuing the legacy of his sire line as an accomplished stallion. His offspring will improve with maturity.

Cafe Pharoah, a Kentucky-bred purchased out of a U.S. sale, is a half-brother to the multiple graded stakes-winning turf milers Night Prowler, a veteran of 23 starts, and Regal Glory, who won or placed in seven of eight starts. Their dam, Mary's Follies, is a multiple graded turf miler who earned $338,889 in 12 starts. Cafe Pharoah’s third dam, Wave to the Queen, is a restricted winning sprinter.

Three Technique closed three-wide to earn second place behind Gold Street in the Smarty Jones. The  Jeremiah Englehart trainee has a 5: 2-3-0 record and is on track to contest the Rebel (G2) on March 14.

Mr. Speaker won graded stakes from a mile to 1 1/4 miles over the lawn. The son of Pulpit gets winners over all surfaces. Three Technique is his most accomplished runner.

Three Technique’s half-brother, Stan the Man, is a veteran of 21 starts with earnings of $404,499. The durable gelding won the nine-furlong Queens County Stakes last December, and he was second in the one-mile Westchester Stakes (G3). Their dam, Nite in Rome, placed in the Natalma (G2) as a 2-year-old.

There isn’t much black type in the distaff line, but the second generation includes the hearty mare Kabul, a multiple graded winner who was capable over Polytrack and turf from seven to nine furlongs. She earned $796,812 in 45 trips to the gate.

(Liam's Map - Kittery Point, by Include)

Liam’s Point graduated as the favorite in Saturday’s third race at Gulfstream Park. The bay colt chased the pace from third on the outside before taking command at the top of the stretch. Liam’s Point raced greenly under Irad Ortiz Jr. but managed to hold on for the win by three-quarters length. The Todd Pletcher trainee got seven furlongs in 1:24.21.

Liam's Map was successful from a mile to nine furlongs at the Grade 1 level. The pretty gray son of Unbridled’s Song is No. 11 on the second crop sire list by earnings. His most accomplished offspring are Hopeful (G1) winner Basin, who is pointing to either the March 7 Gotham (G3) or March 14 Rebel, and Frizette (G1) heroine Wicked Whisper, whose next target is the Honeybee (G3).

Liam’s Point has a classy second generation, which includes the Grade 1-winning turf routers Sweet Talker, Include Me Out and her half-sister, Check the Label, plus multiple graded winning turf veteran Silver Medallion.

Americanus made his second start off the layoff a winning one when he bested six other allowance runners by a length at Gulfstream Park on Saturday. In a sneaky-good ride by Javier Castellano, Americanus settled at the back of the pack early. They rode the rail the entire way, getting through at the top of the lane by a length. The Mark Hennig trainee finished seven furlongs in 1:23.59, and Americanus looked like he had plenty left at the end.  So far, his only off-the-board finish came in his second start, the Nashua Stakes (G3).

Prominent sire War Front gets winners at all distances; however, the majority of his progeny that run on dirt are best up to middle distances, while those who take to the lawn will go farther. His most accomplished runners include champions Air Force Blue, U S Navy Flag, Declaration of War, plus Omaha Beach and Preakness hero War of Will.

Americanus is the fifth foal out of Sapphiresndiamonds. The mare is a full sister to the dam of Hopeful Stakes runner-up Magna Light and multiple stakes placed sprinter Unbridled Graduate. Americanus’ second dam, Unbridled Lassie, was in the money in all seven starts, including runner-up performances in the Coaching Club American Oaks (G1), Bonnie Miss (G2) and National Jockey Club Oaks.

The descendants of Americanus’ fourth dam, the superior mare Lassie Dear, include A.P. Indy, Summer Squall, Lemon Drop Kid and many more classy winners. Horse of the Year Mineshaft is the broodmare sire of 24 graded/listed winners. Only two won beyond nine furlongs: Empress of the Nile, who took last year’s Zagora Stakes over the Aqueduct turf, and Mint Julip, a French listed winner.

After two unsuccessful forays onto the dirt last year, Vintage Print graduated Saturday in his 3-year-old debut over the Gulfstream Park lawn. The Chad Brown trainee clocked a mile over a good course in 1:35.47, winning by three-quarters length over Voodoo Zip.

He’s the first foal out of the multiple graded winner Molly Morgan. The mare was successful from a mile to nine furlongs at the graded level, and her victories include the La Troienne (G1), Fleur de Lis (G2) and Chilukki (G2). She also placed in the Juddmonte Spinster and another edition of the La Troienne. Molly Morgan was best over the dirt and placed twice in five starts on the lawn.

Molly Morgan was only one of two foals out of the stakes-placed Capitulation to race. Vintage Print is a direct descendant of the producer Battle Creek Girl, the dam of Canadian champion 2-year-old filly Wavering Girl and multiple graded winner and sire Tricky Creek, who is the damsire of Into Mischief.

Voodoo Zip pressed the pace before taking over at the three-quarter pole. He fought with Vintage Print down the lane but was passed in the shadow of the wire.

City Zip, a sprinting half brother to Horse of the Year Ghostzapper, is the sire of 71 graded/listed winners. He wasn’t just a one-dimensional speed sire; his offspring win at all distances over all surfaces, including 2014 Champion Grass Mare Dayatthespa and two-time Canadian champ and Horse of the Year Catch a Glimpse. City Zip’s sons Palace, Bustin Stones, Collected and Majestic City will carry on their sire’s legacy at stud.