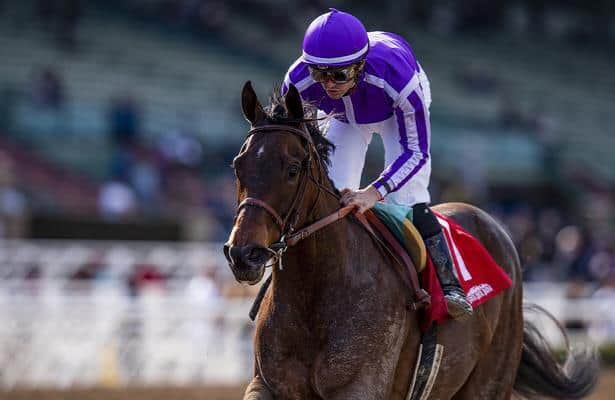 The classy Donna Veloce earned her first graded victory in the Santa Ysabel Stakes (G3) by open lengths, while Shedaresthedevil and Water White have earned 2020 Kentucky Oaks qualifying points in their recent wins. We'll also examine Four Grands, an exciting first daughter from the family of Liam’s Map and Not This Time, in this look at emergin 3-year-old fillies.

After runner-up finishes in the Breeders’ Cup Juvenile Fillies (G1) and Starlet (G1), Donna Veloce broke through tremendously with a 4 1/4-length victory in the Santa Ysabel back on March 8. The Simon Callaghan trainee got 1 1/16-miles in 1:45.43. She’s earned $490,000 in just four starts and owns 62 Kentucky Oaks qualifying points.

From the outset, Uncle Mo quickly established himself as a major stallion. He’s sired three champions in just six racing crops and has close to 100 black type earners. His progeny win at all distances.

Donna Veloce is the second foal and first black type earner in her immediate family. Although her dam, Coin Broker, failed to win in seven starts, she hails from a family with black type. Coin Broker’s half-siblings distinguished themselves internationally, as Step in Time won the prestigious Japan Cup and earned Champion Miler and Champion Older Horse honors in Saudi Arabia. Move Your Vision is a German classic winner, and Great War Eagle is a listed-winning Irish miler.

Four Grands dazzled at first asking on March 8 at Gulfstream Park. The Dale Romans trainee opened up with every stride in the stretch, winning the six-furlong maiden event by 6 1/4 lengths in 1:11.67.  Expectations are high for Four Grands, who could go right into the Gulfstream Park Oaks (G2).

Honor Code won at the highest level from the one-mile Metropolitan Handicap (G1) to the 1 1/8-mile Whitney (G1), and he finished third in the 2015 Breeders’ Cup Classic (G1). His offspring include Withers (G3) winner Max Player, San Felipe (G2) runner-up Honor A. P. and Sweet Life (G3) runner-up Roadrunner’s Honor. Honor Code’s offspring might be best up to middle distances, yet he may get the occasional classic distance winner.

Four Grands has an impressive, classy pedigree. She’s the first foal out of stakes-winning sprinter Taylor S. The mare hit the board in five of seven starts, earning $121,519. Taylor S.’ brothers need no introduction. Liam’s Map captured the 2015 Breeders’ Cup Dirt Mile, Woodward (G1), and listed Harlan’s Holiday Stakes. Ironically, he placed second in the Whitney (G1) to Honor Code, bested by a neck. Not This Time won the Iroquois (G3) and missed the victory in the 2016 Breeders’ Cup Juvenile by a neck. Unfortunately, his career was cut short due to injury, and he went to stud shortly thereafter. His first crop races this year.

Shedaresthedevil broke through in her fourth attempt in a stakes when she captured the Honeybee (G3) on March 7 at Oaklawn Park by three-quarters of a length. Formerly campaigned in California, the Brad Cox trainee got 1 1/16 miles in 1:44.38. Shedaresthedevil now owns 50 Kentucky Oaks qualifying points.

Pedigree: Shedaresthedevil has a miler pedigree.

The precocious Daredevil won the Champagne Stakes as a 2-year-old. The first-crop sire’s offspring are precocious and distance challenged. Shedaresthedevil is his first graded stakes winner.

Shedaresthedevil is the fourth foal and second black type earner in her immediate family. Her half-brother, Mojovation, was third in the Belmont Futurity. Class skips to the third generation highlighted by the sprint warrior, Crafty C. T., who earned $832,652 in 18 starts. His half brother, Carmen’s Baby, is a stakes-winning miler who placed in the Kentucky Jockey Club (G3) and El Camino Real Derby (G3).

After a runner-up finish in the 1 1/8-mile Busanda, Water White enjoyed the cutback in distance in the one-mile Busher Invitational at Aqueduct on March 7. The Rudy Rodriguez trainee, ignored at 17-1 odds, was up in time to win by a nose over Kansas Kis. The pretty gray filly traveled a mile in 1:40.21. Water White has earned $234,275 in 6 starts and has 54 Kentucky Oaks qualifying points.

Conveyance was a true miler and won a pair of Grade 3 races at the distance. Water White is the second-crop sire’s first stakes winner.

Kansas Kis looked like a winner in the stretch of the Busher Invitational until Water White nailed her on the wire. It was 5 1/4 lengths back to the third-place finisher. The Raymond Handal trainee has hit the board in six of seven attempts with earnings of $141,650. Kansas Kis’ next goal may be the Gazelle (G2) on April 4.

Kansas Kis is the second foal and first black type earner in her immediate family. The most accomplished earner in the second generation is Utopian, winner of the Grade 3 Inglewood Handicap at nine-furlongs over the lawn. He also placed in the Charles Whittingham Memorial (G1) and San Marcos (G2) at 10 furlongs. Kansas Kis’s second and third dams own blacktype, and her third dam Grade 2 winner Speed Dialer, is a three-quarter sister to Tricky Creek, the damsire of Into Mischief. Kansas Kis has similar breeding to Tiz the Law. Both are out of Tiznow mares.

Queen of God earned her second stakes victory on Saturday in the Bourbonette Oaks at Turfway Park, capturing the one-mile listed race by three-quarters of a length. The Mike Maker trainee got the mile in 1:37.77. Queen of God previously won the one-mile Mrs. Presidentress Stakes over the Gulfstream Park lawn. She has earned $161,284 in seven starts and owns 20 Kentucky Oaks qualifying points.

Pedigree: Queen of God has a miler pedigree.

Paynter is a top ten national sire. His offspring are primarily milers, although a few have won at classic distances.

Queen of God is the first blacktype earner in her immediate family. Her unraced dam, Chapala, is a half-sister to Dixie Slippers, better known as the second dam of champion and top sire Uncle Mo, plus his half-sister Group 1-placed miler Could it be Love. Chapala is a half-sister to Grade 3-winning sprinter Woods of Windsor.