3-year-old pedigrees: Excession one to watch on the Derby trail 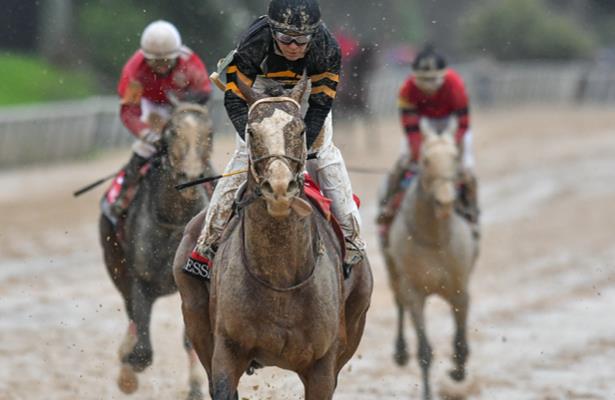 Excession almost stole the Rebel Stakes (G2) from Nadal last Saturday, and he'll likely get a chance to do one better next time in the Arkansas Derby (G1). King Guillermo's another name to know on the 2020 Kentucky Derby trail, ad we'll take a closer look at the synthetic Jeff Ruby Steaks (G3) hero Field Pass in this latest analysis of emerging 3-year-old colts.

Excession surprised racegoers with his close second to the big favorite Nadal after settling into a steady gallop on the rail at the back of the pack under Tyler Baze while Nadal battled up front. Excession cut the corner, still on the rail, but had to steady at the quarter-pole. Shut off eventually, Baze tipped out as Excession chased on for a 3/4-length defeat. The Steve Asmussen trainee previously finished off the board in the Lecomte (G3) and Risen Star (G2) at Fair Grounds. Excession has earned $288,612 in nine starts and owns 20 Kentucky Derby qualifying points.

Belmont Stakes winner Union Rags has matured into an accomplished sire with 14 graded/listed winners to his credit in North America. Surprisingly, his offspring are distance-challenged beyond nine furlongs; only turf router Big Bend, who captured the Dueling Grounds Derby at Kentucky Downs and the Sycamore (G3) at Keeneland, doesn’t fit the mold.

Excession is the first black type earner out of Draw It, who placed second in four consecutive stakes from the one mile Mom's Command to the nine-furlong Gazelle (G1). The versatile mare earned $213,108 in 16 starts.

Tapit is the dam sire of 17 graded/listed winners in North America. The bulk are successful between a mile to nine furlongs. None have won beyond that distance, but Tapit’s daughters are still producing, so a winner at classic distances isn’t out of the realm of possibility.

The Tampa Bay Derby (G2) was upset by this 49-1 longshot who lorded over a full field by 4 3/4-lengths. The Juan Carlos Avila trainee got 1 1/16 miles in 1:42.63. After finishing third behind Sole Volante in the Pulpit Stakes on Gulfstream Park's turf, King Guillermo turned the tables on his rival in Tampa. The son of Uncle Mo was to train up to the Kentucky Derby before its date change to the fall.

King Guillermo is the third black type earner in his immediate family. A half-sister is an English listed stakes-placed sprinter, while another half-sister bore the English Group 2-placed sprinter Sunday Star. King Guillermo’s dam, Slow Sand, failed to place in two starts, but her siblings are milers and routers. They include Pat Day Mile hero Funny Duck; the long-winded Segway, who is multiple graded-placed from 10 to 12 furlongs; and the international stakes winner Slow Pace.

(Lemon Drop Kid - Only Me, by Runaway Groom)

Field Pass didn’t let a wide trip deter him in the Jeff Ruby over Turfway Park’s Poltrack surface. He tracked from third place early, then gradually wore down Invader to win by a neck. The Mike Maker trainee got 1 1/8 miles in 1:49.34.  Field Pass owns 20 Kentucky Derby qualifying points.

The underrated Lemon Drop Kid might be 24 years old, but he’s still able to sire stakes winners. His offspring are noted for being sturdy, later-maturing types who are best at a mile and beyond.

Field Pass owns the only black type in the first two generations of his female family. His third dam, Foggy Moon, competed on the Southern California circuit. She placed in three stakes with the highlight of her career a runner-up finish in the nine-furlong Del Mar Oaks (G3). The hard-knocking mare earned $176,212 in 36 starts for Charlie Whittingham.

Runaway Groom is the damsire of 73 graded/listed winners in North America. His offspring are most successful as sprinters through nine furlongs, and his sole representative at classic distances is Ghost Hunter, a turf router.

Invader pressed the pace on the outside in the Jeff Ruby. He dueled in the stretch with a stubborn Fancy Liquor and, after putting that one away, was caught on the wire by Field Pass. The Wesley Ward trainee has earned $153,200 in seven starts. His runner-up finish in the Jeff Ruby earned Invader eight Kentucky Derby qualifying points.

Pedigree: Invader, a $500,000 Keeneland September Yearling purchase, has a middle distance pedigree, but he may go farther over the lawn.

War Front has sired 55 graded/listed winners in North America, including Omaha Beach, The Factor, Data Link and War of Will. Four of his offspring in the U.S. have won at classic distances, all over the lawn.

The well-bred Invader is a full brother to Fog Of War, a Grade 1-winning turf miler, and to  Naval Intelligence, a listed-placed turf miler. Their dam is an Irish Group 3 winner at nine furlongs. Invader’s second dam is multiple Grade 1-winning turf router Riskaverse, who earned more than $2 million in her 32-race career.

Giocare graduated in his second start on March 7 at Gulfstream Park. He tracked the early pace under Irad Ortiz Jr. before taking over in the stretch to win going away by 1 1/2 lengths. The Todd Pletcher trainee got 1 1/16 miles in 1:45.19.

Pedigree: Giocare has the pedigree to stretch out to classic distances.

Curlin’s offspring are classy winners at all distances. The stallion is consistently in the top five of the national sire ranks.

Giocare is the fourth foal out of the stakes-placed Stormin Maggy, who is a half-sister to dual classic winner and sire Afleet Alex and his stakes-winning older brother Unforgettable Max.

Extraordinary proved to be just that when he graduated by 6 1/4 lengths in a one-mile Gulfstream Park maiden event on Saturday. The Rodolphe Brisset trainee pressed the pace for a half-mile, then kissed the field goodbye, galloping under the finish line in 1:36.88.

Pedigree: Extraordinary, a $750,000 Keeneland September yearling, has a miler pedigree and may stretch to nine furlongs.

Speightstown has sired 78 grade/listed winners in North America. Most of his offspring are sprinter/miler types, but he’ll get the occasional winner at nine furlongs, and also has sired four winners at 10 furlongs, two over dirt.

Extraordinary is the second winner out of multiple graded millionaire, Fiftyshadesofhay. The mare won Grade 2 and Grade 3 stakes, including the Ruffian (G2) and placed second in four Grade 1 events against the likes of Beholder, Princess Of Sylmar and Close Hatches. Extraordinary’s second dam, Quiet Kim, placed in the Santa Anita Oaks (G1) behind Balance.

This is the distaff line of Travers (G1) winner Afleet Express and his sister, Alabama (G1) heroine Embellish the Lace, plus Florida Derby (G1) winner Materiality and 2006 Preakness runner-up Sweetnorthernsaint.