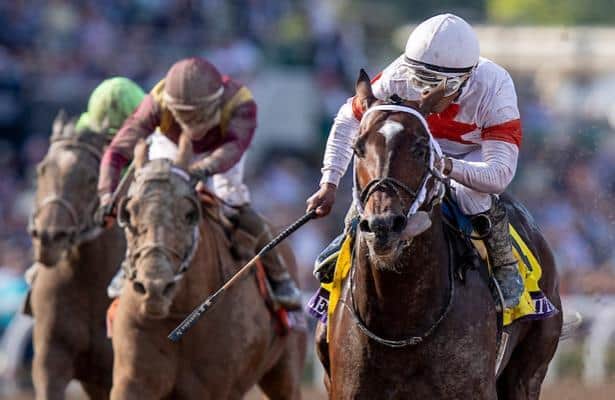 Lead by Danza’s daughter, Cruise and Danze, this week’s fillies to know include a half-sister to 2019 Champion Male Sprinter Mitole and a late-maturing daughter of Curlin. Let’s review their bloodlines and see how far these emerging 3-year-olds may go.

Lucky Dime graduated at Gulfstream Park on Sunday in a seven-furlong event after several runner-up finishes at Churchill Downs, Belmont Park and Saratoga. Guided by Julien Leparoux, Lucky Dime pressed the pace before drawing clear by 3 3/4 lengths The Bill Mott trainee was timed in 1:24.52 for seven furlongs.

Lucky Dime is a half-sister to 2019 Champion Male Sprinter Mitole. Their dam placed in one of two starts. Indian Miss’ half-sister, Live Lively, is a Grade 2-winning miler, and they’re out of the stakes-winning sprinter Glacken’s Gal. The third generation of  Lucky Dime’s distaff family includes a pair of listed/restricted winning sprinters.

CRUISE AND DANZE
(Danza - Mare, and Cher, by Old Fashioned)

Cruise and Danze earned her first stakes victory on Saturday in Aqueduct’s seven-furlong Ruthless Stakes. Cruise and Danze dueled on the pace early, then drew clear by 2 1/4 lengths under a vigorous hand ride by Eric Cancel. The Jeremiah O'Dwyer trainee finished seven furlongs in 1:25.00.

Pedigree: Cruise and Danze has a miler pedigree. First crop sire Danza won the Arkansas Derby and was third in the Kentucky Derby. Cruise and Danze is his first stakes winner. The majority of his offspring will be sprinter/milers, and a few may go longer.

Cruise and Danze is a first foal. Her dam, Mare and Cher, is a half-sister to 2019 Fifth Season Stakes winner Fight On, who is a sprinter/miler. Their half-brother, Two Weeks Off, ran third in the 2015 Peter Pan (G2). The most accomplished runner in the third generation of Cruise and Danze’s female family is 2016 Kentucky Oaks heroine Cathryn Sophia.

Morning Addiction was all heart on Sunday while earning her first victory over Santa Anita’s main track. Morning Addiction broke awkwardly, then bumped hard with a rival. Jorge Velez hustled the chestnut filly to vie in a three-way speed duel. After shaking clear of her rivals, Morning Addiction held off a late charge by Regal Beauty by a head. The Peter Eurton trainee traveled 5 1/2 furlongs in 1:05.14.

Pedigree: Morning Addiction has a miler’s pedigree, and turf could be an option. Carpe Diem won the Breeders’ Futurity (G1), placed in the Breeders’ Cup Juvenile, and then as a 3-year-old, won the Tampa Bay Derby (G2) and Blue Grass Stakes (G1). Carpe Diem is the No. 10-ranked first crop Sire. His progeny include listed winner Bella Aurora and Sweet Kisses, who finished third in the Letellier Memorial.

Morning Addiction is the first starter out of the allowance-class turf sprinter/miler Quay, who earned $213,526 in 15 starts. Quay’s half-sister, Quaver, is a stakes-placed sprinter. Morning Addiction’s second dam, Skipper Tale, didn’t earn any black type, but she’s a full sister to Grade 3-winning sprinter Ashley’s Kitty. Their half brother is Gold Cup at Santa Anita (G1) hero and new sire Cupid. A pair of stakes-winning sprinters, Heart Ashley and Indianapolis, are also part of the third generation of Morning Addiction’s distaff line.

Regal Beauty had a promising beginning to her racing career on Sunday, sprinting over Santa Anita’s main track. She broke slow under Drayden Van Dyke and  trailed the field by five lengths through the early race stages. Van Dyke took the Bob Baffert trainee four-wide around the turn and they made a furious charge, only to fall short by a head.

Pedigree: Regal Beauty, a Gary and Mary West homebred, has a miler middle-distance pedigree. Malibu Moon is an established stallion, ranked No. 18 on the General Sire list. His progeny win at all distances and include 2013 Kentucky Derby hero Orb and the multiple Grade 1-winning mares Devil May Care and Life at Ten.

Regal Beauty is the third foal out of the Grade 1-winning sprinter, Book Review, who was also conditioned by Bob Baffert. The mare earned $884,955 in a 15-race career. Spinaway (G1) heroine Irish Smoke and her son Grade 3-placed Pole Setter are part of the third generation of Regal Beauty’s distaff line. Regal Beauty is bred upon the same bloodline cross as the graded winning milers Eden’s Moon, Donegal Moon, and Amazonian, a Canadian listed winner at 1 1/8 miles.

The slower-maturing Ferber graduated in her sixth start, a one-mile turf event Friday at Tampa Bay Downs. Tomas Mejia took the chestnut filly to the front, where they established a comfortable lead. She turned back a challenge at the top of the stretch and sailed home by 2 1/4 lengths. The Michael Stidham trainee got the mile in 1:37.88.

Pedigree: Ferber has a middle distance/classic pedigree. Two-time Horse of the Year Curlin passes along his racing talent to his offspring. The established stallion is ranked No. 2 on the general sire list by earnings. His offspring win at all distances and over all surfaces.

Ferber, a Godolphin homebred, is the fourth foal out of an unraced mare, and none of her siblings own black type. Her dam, Pulitzer, is a half-sister to multiple champion turf router Fantastic Light. The globetrotter amassed $8,486,957 in 25 starts while racing against the best turf horses in the world. Ferber’s third dam was 1979 Canadian Champion 3-Year-Old filly and superior female Kamar. Ferber is bred on the same cross as last year’s Black-Eyed Susan (G2) heroine Point of Honor; both are by Curlin and out of daughters of Bernardini.