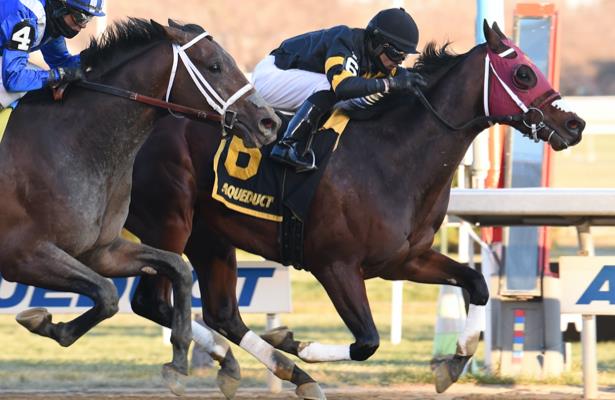 Photo: Elsa Lorieul/NYRA
Thousand Words and Shotski firmed up their spots on 2020 Kentucky Derby watch lists with victories Saturday in the Los Alamitos Futurity (G2) and Remsen Stakes (G2), respectively, while Bill Mott unveiled a maiden who looks like he's fit to run in graded company. Let's get to know the bloodlines of these emerging 2-year-old colts.
Thousand Words
(Pioneerof the Nile – Pomeroys Pistol, by Pomeroy)
Making only his second start, Thousand Words turned away Breeders’ Cup Juvenile runner-up Anneau d’Or by a neck in the Los Alamitos Futurity (G1). The Bob Baffert trainee got 1 1/16 miles over track rated "good" and sealed in 1:43.19. Perhaps we’ll see Thousand Words surface in the San Felipe Stakes (G2).
Pedigree: This $1 million baby has a miler pedigree but may handle 1 1/8 miles due to his talent and training. Pioneerof the Nile gets winners at all distances, but Thousand Words’ distaff line is speed-oriented. He’s the third foal and second winner out of a multiple graded winning sprinter who earned more than $574,000 in her 14-race career. Pomeroys Pistol captured the Forward Gal (G2), Gallant Bloom (G2) and Sugar Swirl (G3), and placed in the Test and Prioress, both Grade 1 events.
Pomeroys Pistol is a half-sister to the multiple stakes placed sprinters Wildcat Creek and D’Cats Meow. A half-sister bore Good Credence, who was third in this year’s Maid of the Mist Stakes at a mile. Thousand Words’ third dam, Swearingen, was a multiple stakes veteran turf mare who was successful from a mile to 1 1/8 miles. The hardy mare earned $673,233 in 37 starts. Thousand Words’ damsire, Pomeroy, is a multiple Grade 1-winning sprinter who earned $845,050 in 18 starts. He sired 14 stakes winners in the seven years that he stood in America before shipping to Saudi Arabia. Thousand Words is Pomeroy’s first stakes winner as a broodmare sire.

Returning off a fourth-place finish in Churchill Downs' Street Sense Stakes, Shotski led gate to wire in the Remsen, holding off a late charge by Ajaaweed, to win by a half-length. The Jeremiah O'Dwyer trainee traveled 1 1/8 miles over a fast track in 1:54.24. Shotski has plenty of options for his next start, including a return to New York for the Withers (G3).

Pedigree: Shotski has the conformation of his sire and a middle-distance pedigree. Turf could also be an option down the road. Horse of the Year Blame has sired 20 graded/listed stakes winners, and they are equally good over both surfaces. The bulk are best between a mile to 1 1/8 miles. Two of his offspring have won stakes at 1 1/4 miles and farther, both over the lawn. Shotski’s half-brother, Colonist, placed over the turf in the American Stakes at a mile and was third, beaten 3 1/2 lengths, in the 1 1/4-mile Los Alamitos Special. Shotski’s second generation is filled with black type, mainly turf milers. They include multiple graded turf miler Dynaslew, her stakes-winning half-brother, Slews Answer, plus Fortunate Girl, who missed by a neck in last year’s Wait a While Stakes. Shotski’s second dam Fortune Pending is a restricted stakes-winning miler.

Now we come to the intriguing part of Shotski’s pedigree, his damsire, Bluegrass Cat. The stallion bounced around between Kentucky, New York and California, before being sold to Turkey this year. Bluegrass Cat’s legacy will be as a broodmare sire. Currently, his daughters have produced only four stakes winners, but two of them, Sweet Loretta and Henley’s Joy are Grade 1 winners. Bluegrass Cat is a son of Storm Cat. At one point, you couldn’t swing a cat without hitting one of Storm Cat’s offspring, much like Tapit today.

Storm Cat’s sons are spectacular broodmare sires. Storm Cat and his sons are found on the bottom of the pedigrees of Triple Crown hero American Pharoah, Kentucky Derby winner Nyquist, Horse of the Year Gun Runner, Champion 2-Year-Old Shared Belief, Champion Older mare Close Hatches, and the list goes on. The Arch/Storm Cat cross has yielded 15 graded/listed winners, but none have been successful beyond 1 1/8 miles. They include last year’s Withers’ winner Tax and Lecomte Stakes hero Instilled Regard.

Joel Rosario settled Ajaaweed on the outside near the back of the pack in the early stages of the Remsen. They took the scenic route, going five wide around the turn. Ajaaweed took dead aim on Shotski, closing into soft factions, but that one had too large a lead, and Ajaaweed ran out of real estate. The Kiaran McLaughlin trainee may continue contesting the New York preps for the Kentucky Derby, although he could surface at Gulfstream, too.

Pedigree: Ajaaweed has a miler/middle-distance pedigree, and turf could be an option later in his career, too. Curlin gets winners at all distances. Ajaaweed is the first black type earner out of Asiya, who placed in the Busanda at a mile and seventy yards and the seven-furlong Dream Rush Stakes. Mother and son own the only blacktype in two generations of the distaff family. The third generation includes Philip H Iselin (G3) winner Harlan Punch; his half-brother United, who placed in this year’s Breeders’ Cup Turf; and their half-sister, the multiple restricted winning sprinter/miler Tensas Punch. Galloping Gal, a multiple stakes-winning turf miler and her son CashCall Futurity (G1) hero and sire Liaison, are also part of the family.

Despite being by Awesome Again, Daaher was a top-notch miler and upset Midnight Lute in the 2007 Cigar Mile. Daaher has sired six listed/graded winners. None have won beyond 1 1/8 miles. Daaher is a young broodmare sire. Only eight of his daughters have bore foals, and none are stakes winners.

Moon over Miami was green but talented while breaking his maiden at Aqueduct on Sunday. The Bill Mott trainee flashed the field by five lengths, winning at a mile in 1:39.25. The bay colt was previously fourth running six furlongs at Belmont. Moon Over Miami is likely to join Mott's string in Florida over the winter.

Pedigree: The Summer Wind Equine homebred has the pedigree to run all day. He’s the first foal to race out of a stakes-placed turf miler. Zinzay finished second in the 2013 Jessamine Stakes (G3). Class skips a generation in Moon Over Miami’s pedigree. The third generation of his female family includes Music Note, who captured the Mother Goose, CCA Oaks, Gazelle, Ballerina, and Beldame. Her half-sister Musical Chimes was victorious in the French One Thousand Guineas and John C. Mabee Handicap (G1) over the lawn. Surprisingly, the Malibu Moon/Smart Strike cross has produced only one graded/listed winner, Canada’s 2018 Champion Female Sprinter Moonlit Promise.

??2YO Moon Over Miami at 9-1 begins the Empire 6 with @Juniorjockey at #TheBigA! pic.twitter.com/NvS19bf4Vb

Ra’ad ran down Phast Pharoah to win a six-furlong maiden event on the Los Alamitos Futurity card. The Bob Baffert trainee hit the wire 2 1/2-lengths in front, stopping the time in 1:10.12 over a "good," sealed track.

Pedigree: Overall, Ra’ad has a miler pedigree. Twirling Candy has produced 19 graded/listed winners who are capable at all distances and over all surfaces. Ra’ad, a $500,000 OBS April 2-year-old in training purchase, is the second winner in his immediate family. His dam, Tough Market, was in the money 13 of 25 starts from six furlongs to 1 1/16 miles. She’s a half-sister to the tough New Yorker Law Enforcement, a veteran of 30 starts, including three sprint stakes wins. He set a new stakes record in the John Morrissey Stakes of 1:14.76 for 6 1/2 furlongs. Ra'ad’s third dam, Medici Bells, is a stakes-winning sprinter who hit the board in the 1992 Landaluce and Sorrento Stakes. Ra’ad damsire Suave, a son of A.P. Indy, has only two graded/listed winners to his credit as a broodmare sire; this year’s Pocahontas Stakes heroine Lazy Daisy and turf sprinter Tapit Star.