2-year-old pedigrees: Maxfield, Tiz the Law own the spotlight 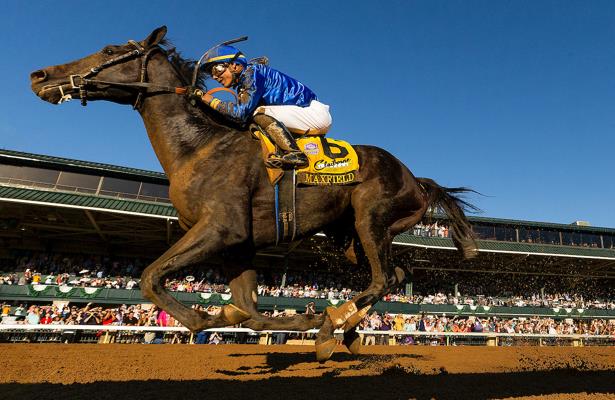 The Breeders’ Cup's "Future Stars Friday" events gained a number of 2-year-old male contenders over the weekend while we saw some 2020 Kentucky Derby trail runners reveal themselves. Let's get to know their bloodlines:

Mirroring his debut, Maxfield was off a step slow out of the gate in Saturday's Breeder’s Futurity (G1) over Keeneland’s main track and lingered near the back of the pack. Jose Ortiz said “go,” however, and the Brendan Walsh trainee quickly picked off horses while circling the field. Maxfield was powerful down the stretch, widening his lead to 5 1/2-lengths. The final time for 1 1/16 miles was 1:44.21.

Pedigree: Maxfield has a middle-distance to classic pedigree and his conformation supports it. The Godolphin homebred is well-balanced, not overly muscular, and has choppy high knee action but no paddling. He drifted slightly in the stretch in response to aggressive handling by Ortiz. Maxfield’s dam is a half-sister to established sire Sky Mesa. Among the many stakes winners produced by this distaff line are established sires Bernstein, Wiseman’s Ferry, and multiple graded winner Good Samaritan.

Tiz the Law bobbled slightly at the start of Saturday's Champagne Stakes (G1). Manny Franco restrained the son of Constitution to sit in fifth place, and the pair had to check off heels. The Barclay Tagg trainee settled into a comfortable rhythm between horses by the half-mile pole. Franco moved Tiz the Law to the outside in the stretch and, after briefly ducking in, the white-faced colt had clear sailing. He opened up by four lengths to win the 1 1/16-mile event in 1:35.41. Sackatoga Stable, the owners of Tiz the Law, and Tagg teamed to win the 2003 Kentucky Derby with Funny Cide.  Sackatoga Stable Operating Manager Jack Knowlton indicated that they will skip the Breeders' Cup Juvenile in favor of Churchill Downs' Kentucky Jockey Club Stakes (G2)  with the goal of competing in the 2020 Kentucky Derby.

Pedigree: New York-bred Tiz the Law has the breeding to enjoy classic distances.  He’s a powerful looking colt with the conformation of a distance horse. He moves smoothly, with no paddling. He’s a touch green, which is to be expected after only two starts. Tiz the Law is a half-brother to multiple stakes-placed sprinter Awestruck. Their dam is a Grade 2 winner at 1 1/8 miles, and she earned more than $400,000 in 20 starts. Tizfiz is a full sister to Grade 3 winner and sire Fury Kapcori, and she’s a half-sister to Turf Paradise Derby hero Dixie Commander. This is the distaff line of champion 2-year-old Favorite Trick and multiple Grade 1-winning juvenile Moonshine Memories.

Four Wheel Drive broke sharply in Sunday's Futurity Stakes (G3) over the Belmont lawn, but after Jack and Noah pushed for the lead, Irad Ortiz, Jr. let them go and settled his mount into second place off a torrid early pace. The Wesley Ward trainee took command in the stretch, bearing out slightly, but won by three lengths under a hand drive. They got six furlongs in 1:08.07.  Four Wheel Drive is undefeated in both starts and captured the Rosie's Stakes at Colonial Downs in his debut. With Ward loaded in the Juvenile Turf Sprint, the 1-mile Juvenile also looms as an option.

Pedigree: Four Wheel Drive may handle middle distances, and there are both turf and dirt affinities in his pedigree. His dam won the Colleen Stakes sprinting over the Monmouth turf as a 2-year-old. Although Funfair owns the only blacktype amongst her siblings, a half-brother was capable at 1 1/4 miles over the lawn. Four Wheel Drive’s third generation includes 2009 Breeders’ Cup Dirt Mile hero Furthest Land, multiple graded handicap horse Dynever and the swift multiple graded stakes-winning sprinter Ready for Rye.

(Declaration of War - Sense of Class, by Fusaichi Pegasus) neck

In Sunday's Bourbon Stakes (G3) over the Keeneland turf, Peace Achieved pressed the early pace on the outside through the early stages. Miguel Mena and his mount then picked it up around the turn and fought down the stretch with Gear Jockey. As Piece Achieved put away a tiring Gear Jockey, he held off Vitalogy's late charge by a neck. The time for the 1 1/16 miles was 1:43.06. The Mark Casse trainee is undefeated in three starts, including a victory in the Juvenile Stakes at Kentucky Downs. With his latest victory, Peace Achieved earned a spot in the Breeders’ Cup Juvenile Turf, and Casse indicated that Peace Achieved would ship to Santa Anita about a week before the big race.

(More Than Ready - Highway Mary, by U S Ranger)

In Sunday's Zuma Beach Stakes over the Santa Anita turf, Hit the Road had to steady before the first turn and wound up at the rear of the pack in the early going. Victor Espinoza let the Dan Blacker trainee find his stride down the backstretch. Hit the Road circled the field five-wide around the far turn and won going away under a hand ride by 2 1/4 lengths. The time for a mile was 1:34.33. After the race, Blacker said he's hoping for a spot in the Breeders’ Cup Juvenile Turf.

Pedigree: Hit the Road has a miler’s pedigree. He’s the first foal out of an unraced mare. The majority of his distaff line is filled with international stakes winners, as his dam is a half-sister to Group 1 stakes-winning turf sprinter War Command and to French Group 3-winning miler Naval Officer. Hit the Road’s second dam, Wandering Star, captured Woodbine's E.P. Talylor Stakes (G1) as a turf router.

Sprawl found 1 1/16 miles to his liking as he rallied to win a maiden race Saturday over Keeneland's main track. Javier Castellano relaxed Sprawl in mid-pack during the early going. Sprawl moved up around the far turn and circled the field five-wide. The Bill Mott trainee fought with Blood Moon before prevailing by a half length, with the final time 1 1/16 miles clocked at 1:45.70. Previously, Sprawl finished behind Grade 1 stakes runners Maxfield and Gozilla at shorter distances. The Breeders’ Cup Juvenile comes up too soon, but Sprawl is one to watch on the Derby trail.

Pedigree: Sprawl has the conformation and pedigree of a middle distance horse, but his off-the-pace style could take him a bit farther. The Claiborne homebred is out of a half-sister to established sires Flatter and Congrats, and to multiple stakes-placed turf sprinter Commend. This is the distaff line of sires Eastern Echo, and Roar, plus multiple Grade 1 heroine Elate and this year’s Jim Dandy winner Tax.

Blood Moon has finished second in both his starts. Conditioned by Rodolphe Brisset, the former assistant to Bill Mott, Blood Moon tracked the pace from fourth, moved up around the turn and was caught late by Sprawl on Saturday at Keeneland.

Pedigree: Blood Moon sports a miler pedigree. He drew a winning $450,000 bid at the 2018 Keeneland September Yearling auction as a half-brother to multiple graded winning miler G. G. Ryder, who earned over $700,000 in 59 starts. His half-sister Kowboy’s Gigi is a stakes-placed sprinter. Their dam is a half-sister to the sharp sprinter Force Freeze, who placed in the 2011 Breeders’ Cup Sprint.

Chapalu overcame trouble to beat a full field of maidens over the Keeneland lawn on Sunday. The Arnaud Delacour trainee had to check in traffic around the first turn before Javier Castellano took his mount five-wide around the final bend. The pair sailed past the field while drifting out. The final time for the mile was 1:36.24.