2-year-old pedigrees: How far will Shoplifted go on the Derby trail? 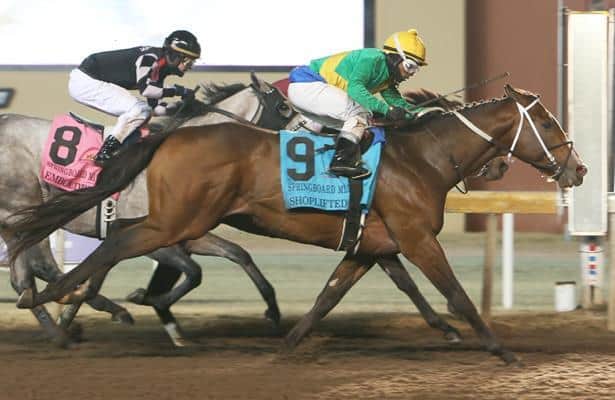 Shoplifted added his name to the early roster of 2020 Kentucky Derby contenders with a dramatic victory in Sunday night's Remington Springboard Mile. Earlier in the weekend, Vanzzy impersonated a reindeer by skipping through the snow in Woodbine's Display Stakes, and at Fair Grounds, Chimney Rock proved he wasn’t just a one-trick pony when he overwhelmed state-breds in the Louisiana Champions Day Juvenile.

Let’s get to know this week’s 2-year-old stakes horses.

Shoplifted found a field he could beat in the Remington Springboard Mile and earned 10 points towards the Kentucky Derby in the process. Ricardo Santana Jr. kept Shoplifted on the outside in mid-pack for much of the race. They made a strong move through the stretch to win in a blanket finish by a head in a final time of 1:37.95. Previously, the Steve Asmussen trainee placed second in the Hopeful Stakes (G1) but was off the board in the American Pharoah (G1) and Breeders’ Cup Juvenile.

Pedigree:  Shoplifted, an $800,000 2-year-old in training purchase, has a sprinter/miler pedigree. Into Mischief is one of the top sires in America, with his offspring best up to 1 1/8 miles. Shoplifted is the first black type earner in his immediate family. His dam, Shopit, is a half-sister to the precocious stakes-winning sprinter Fifth Avenue. Plus Shopit’s half-sister, Shoppers Return, bore Grade 2-winning turf sprinter Imprimis and stakes-placed turf sprinter Warranty.

SHOPLIFTED gets the win over Answer In tonight in the Springboard Mile @RemingtonPark! @RSantana_Jr on the mount for Trainer Steve Asmussen & Owners Grandview Equine, Cheyenne Stables!

Answer in settled about a length in front of Shoplifted for much of the Springboard Mile. He faced a wall of horses around the turn and never had clear running through the stretch. Javier Castellano sent the Brad Cox trainee through a narrow opening on the rail next to Embolden, where they fought bravely but missed the head bob. Answer In earned four Kentucky Derby qualifying points for his second-place finish.

Pedigree: Answer In has a miler/middle-distance pedigree to complement a long-reaching stride. Florida Derby hero Dialed In is the sire of 10 graded/listed stakes winners, including the old war horse Gunnevera. None of his stakes offspring have won beyond 1 1/8 miles, although Gunnevera has placed multiple times at 1 1/4 miles.

Answer In is the first foal out of a stakes-placed sprinter who earned $125,520 in 18 starts. Answer In’s third-generation includes P. G. Johnson heroine Changeisgonnacome her granddaughter, Newly Minted, who stepped outside of New York-bred company to win last summer at Saratoga. Answer In has similar breeding to Gunnevera. Both are sons of Dialed In out of mares from the Unbridled sire line.

Embolden chased the pace on the outside in the early stages of the Springboard Mile, then grabbed the lead in the stretch. Shoplifted and Answer In were hot on his heels, and Embolden couldn’t hold off the late charge. He settled for third in the blanket finish, earning two Derby qualifying points. In his debut, the Mike Stidham trainee finished a distant second to Meru, who recently placed second in the Nashua (G3), and Embolden went on to try turf sprints as well.

Vanzzy dashed through the snow to capture the listed Display Stakes at Woodbine by a half-length. He was never seriously threatened and won the 1 1/16-mile listed event in 1:45.90 with one ear cocked. The Michael Pino trainee has won or placed in three of four starts, including a troubled runner-up finish in the Parx Juvenile Stakes.

Pedigree: Vanzzy has a miler pedigree and is successful over dirt and Polytrack. His sire, Verrazano, captured graded stakes from 1 1/16 miles to 1 1/8 miles. He’s the sire of six graded/listed winners, none past 1 1/16 miles, and all captured their stakes races over turf or all-weather surfaces.

Vanzzy is a half-brother to Coltandmississippi, who was third in the Penn Mile (G2), Jerome, and Bridgetown Stakes. Vanzzy’s half-sister bore Borracho, who was third in this year’s Woody Stephens (G1). Their dam, a multiple listed winning sprinter, earned $327,340 in 17 starts. She's a half-sister to Grade 3-placed sprinter My Dear Venezuela.

Chimney Rock proved he can do it all when he outclassed the field by six lengths sprinting on dirt in the Louisiana Champions Day Juvenile Stakes. Previously, the Mike Maker trainee just missed the victory by a half-length in the Breeders’ Cup Juvenile Turf. Chimney Rock got six furlongs in 1:11.46.

Pedigree:  Chimney Rock has miler breeding. Artie Schiller, a multiple graded winner from a mile to nine furlongs, shows 39 graded/listed winners to his credit. Like their sire, Artie Schiller’s babies are best up to 1 1/8 miles.

Chimney Rock is the first stakes winner in the immediate family, although his half-brother, Dubai Chanel, is multiple stakes-placed in Puerto Rico. Their hardy dam earned $435,000 the hard way -- in 42 starts, including a restricted stakes placing as a sprinter. Chimney Rock’s third dam, Zadracarta, was a multiple restricted stakes-placed sprinter who earned $338,995 in 27 starts.