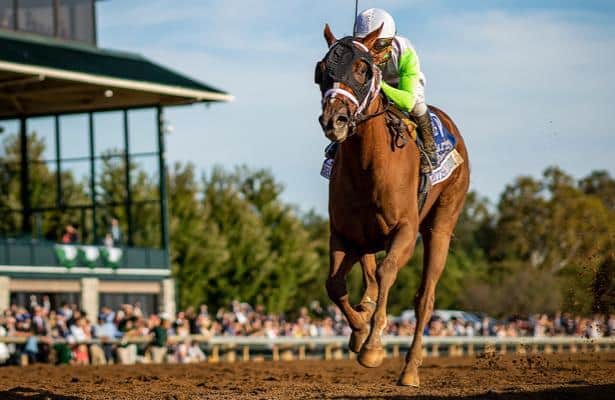 The Breeders’ Cup's "Future Stars Friday" picked up a number of young starlets across divisions over the weekend, including some who hinted at things to come on the way to the 2020 Kentucky Oaks. Let’s take a look at their bloodlines.

In the Alcibiades (G1) over Keeneland’s main track, British Idiom tracked the pace in tight between horses in third early on before Javier Castellano eased her back to fourth on the outside. The Brad Cox trainee made her way to the front by the quarter pole and opened up to win by 6 1/2 lengths with the 1 1/16-mile final time in 1:45.80. A bargain $40,000 Fasig-Tipton October yearling, British Idiom is undefeated in both starts and has earned $281,250, plus an invitation to the Breeders’ Cup Juvenile Fillies.

Pedigree: British Idiom shows a miler’s conformation and pedigree. She has an athletic build and smooth gait with no wasted motion, with the only knock that she drifted slightly in the stretch in response to the whip. British Idiom’s half-sister Parade Of Roses is a stakes-winning sprinter.  Their dam was a multiple stakes-winning 2-year-old and she earned close to $400,000 in 19 starts. The third generation includes Grade 2-winning sprinter Princess Pietrina, and 2014 Alcibiades Peace and War is also part of this family. British Idiom is inbred to the Rene-de-Course Weekend Surprise through half-siblings A.P. Indy, the third tail sire of Flashback (great grandfather on sire’s side) and Mr. Sekiguchi’s dam Welcome Surprise.

Wicked Whisper had it all her own way in the Frizette Stakes (G1) over Belmont Park’s main track. Joel Rosario guided the Steve Asmussen trainee to the rail, and Wicked Whisper kept a comfortable lead the entire way. She expanded the margin slightly late to win by 2 3/4 lengths.  The final time for the mile was 1:35.92. A $500,000 Keeneland September Yearling purchase, Wicked Whisper has captured both of her starts and has earnings of $269,500. She'll meet British Idiom in the Breeders’ Cup.

Pedigree:  Wicked Whisper has a classy, precocious miler’s pedigree, but may carry her speed farther with maturity.  All three half-siblings are blacktype earners. Half-sister Point Of Honor won the Black-Eyed Susan (G2) and is dual Grade 1-placed. Half-sister Velvet Mood won the My Dear Stakes as a 2-year old, and half-brother Admiral Jimmy placed in the Tremont as a 2-year old. The second generation includes multiple stakes veteran Capitano, who earned more than $570,000 in 36 starts, plus Grade 3 winners Dilemma, Heavenly Ransom, and Mr. Freeze.

Alms lingered on the hedge at the back of Saturday's six-horse Matron (G3) field in the early going over the Belmont inner turf. Jose Lezcano switched the Michael Stidham trainee to the outside around the far turn, and the pair went widest of all. Alms tore down the stretch with a huge turn of foot to win by 1 1/4 lengths. The final time for six furlongs was 1:09.03. No word yet on whether Alms will be Breeders’ Cup-bound.

(Munnings - Cozze Up Lady, by Cozzene)

Kimari stamped herself as a major contender for the Breeders’ Cup Juvenile Turf Sprint with a strong performance Sunday when beating the boys in the Indian Summer Stakes over the Keeneland turf. Under Mike Smith, Kimari trailed the field early, circled the field five wide in the stretch and pushed clear to win by a half length. The final time for 5 1/2 furlongs was 1:03.03. Earlier this season, Kimari ran second in the prestigious Queen Mary Stakes (G2) at Royal Ascot before the Wesley Ward trainee returned to capture the Bolton Landing Stakes at Saratoga.

The longest shot in the short field, Warren's Showtime got up late to capture Sunday's Surfer Girl Stakes by 3/4 of a length at Santa Anita Park. The final time for the one-mile turf event was 1:35.06. Warren’s Showtime may contest the Breeders’ Cup Juvenile Fillies Turf in her next start.

Pedigree: Warren's Showtime has a miler/middle distance pedigree, and there’s a direct line of class starting in the filly’s third generation. She’s the first foal out of a Grade 1 earner of more than $900,000. Warren's Showtime’s third dam, Natures Way, earned more than $400,000 in 31 starts as a Grade 3 winner at 1 1/8 miles.

In Keeneland’s first race on Saturday, Specially lived up to her $475,00 OBS March sales tag in a huge way. After pressing the early pace three-wide on the outside, Specially and Florent Geroux cruised home by 5 1/4-lengths. The Mark Casse trainee zipped six furlongs in 1:10.45.

Pedigree: Specially has the conformation and pedigree of a miler and may handle multiple surfaces. She’s a half-sister to Long Branch winner Joevia, who was third in this year’s Belmont Stakes. Class jumps to the third generation. Specially’s third dam, Special Broad, is a Grade 3-winning miler. Specially is inbred to the Rene-de-Course (superior mare) through Tapit’s dam Tap Your Heels and War Front’s damsire, Rubiano.

WATCH ? (10) Specially wins the opener on debut with @flothejock aboard over (8) Lucrezia and (11) Catechism. #Keeneland pic.twitter.com/XiBGDZXp6k

The lightbulb went on for Maedean in her second start at a mile over Belmont’s main track on Friday. The Mark Henning trainee trailed the field early, following quick early fractions of :22 and :45.87.  She gained ground on the rail around the turn, then John Velazquez swung Maedean six-wide. She fought with Water White down the stretch before pulling clear to win by 1 1/4 lengths. The final time for the mile was 1:36.10.  Maedean was a $450,000 Keeneland September purchase by Courtlandt Farm.

Pedigree: The large, athletic Maedean has the conformation and pedigree to run all day and could be a strong competitor over turf as well. An interesting note, the pretty gray filly has a large white splotch on her right hip. Maedean’s dam placed third in the Belmont Oaks Invitational (G1). She’s a half-sister to the stakes-winning turf sprinter/milers Adirondack Summer and Summer Breezing. Maedean second dam and third generation are French blacktype earners.