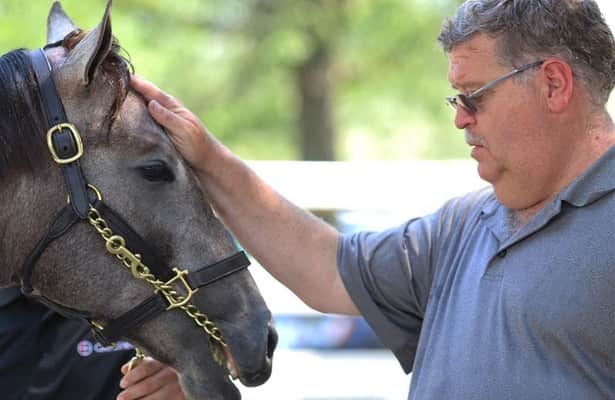 The $200,000 Street Sense Stakes attracted a field of seven 2-year-old colts and geldings who will travel 1 1/16-miles over the main track Sunday at Churchill Downs.

The most accomplished winner in the race's eight-year history was Improbable, who became 2020 champion older dirt male.

As part of Churchill’s "Stars of Tomorrow," the Street Sense stakes is one of two stakes races on a card catering to 2-year-olds. The Rags to Riches for fillies is the counterpart. The Street Sense is billed as race 10 of 11, with a 5:36 p.m. EDT post time.

Red Knobs. Returning off a 6 1/4-length maiden victory over a subpar field at Ellis Park, Red Knobs put in a strong stretch drive to finish third the Iroquois Stakes (G3), beaten a length for first money. The Dale Romans trainee is searching for his niche. His 5 1/2 furlongs turf debut was too short, but Red Knobs still made up ground in the stretch. Red Knobs posted a pre-race four-furlong breeze in 47.20 seconds, the second-best of 90 of the day. If James Graham can give Red Knobs a closer stalking trip, they have a chance to win it. Win contender.

Pedigree: Red Knobs (Union Rags - Hokey Okey, by Lonhro [AUS]) has a turf-oriented pedigree and high knee action. His dam was unplaced in four starts after trying turf, Polytrack, and dirt. Her half-sister Surya is a multiple graded winning turf miler, and that one bore Aruna, winner of the Spinster (G1) over the Keeneland Lawn, along with three other stakes up to 1 3/16 miles. Aruna's full sister Hoop of Colour is a Grade 2 turf winner, and this family also includes Her World, who beat the boys in this year's Tyro Stakes, sprinting on the lawn.

Lucky Boss. He returns to the dirt after a failed turf experiment against graded stakes types in the Bourbon (G2). He previously finished second, in a weak edition of the Ellis Park Juvenile, bested a half-length. The winner finished ninth in his next start, and only one runner from the race hit the board in their next start. Nevertheless, Lucky Boss has a few things going for him, like the high percentage trainer/jock combo of Ken McPeek and Brian Hernandez, Jr., who won last year's Street Sense with King Fury, plus Lucky Boss posted a pre-race five-furlong bullet move in 59.40 over the track. Do you feel lucky? Win contender.

Pedigree: At first glance, Lucky Boss (Street Boss - Lucky Striker, by Van Nistelrooy) has a sprinter's pedigree. However, his sire won at nine furlongs, and his offspring include winners at nine furlongs and beyond, including Kentucky Oaks (G2) heroine Cathryn Sophia and Arkansas Derby (G2) winner Danza. Lucky Boss' dam is a half-sister to the game multiple graded winner Musket Man, a winner at nine-furlongs and who was third in the 2009 Kentucky Derby and Preakness.

Kiss the Sky. After closing to miss the victory in the Kentucky Downs Juvenile Mile by three-quarters length, Kiss the Sky switches back to dirt and stretches out. After a tough trip, he finished second in his dirt debut to Lucky Boss, so the Mike Maker trainee should handle the going. Kiss the Sky is the only colt in the Street Sense field with a victory at 1 1/16 miles. He has tactical speed and can stalk the pace or close from the back. Win contender.

Pedigree: I love how versatile, and hardy Twirling Candy's offspring are. Kiss the Sky (Twirling Candy - Kiss Is a Kiss, by Broken Vow) is a full brother to Nice Not Nice, who placed in the 2018 Ack Ack (G3) and was third in that year's Fayette (G2).

Howling Time. The appropriately named Howling Time chased a swift early pace while four to six wide, yet won his six-furlong debut here by 1 1/2 lengths under a hand ride by Joe Talamo. Trainer Dale Romans has a 36 percent win ratio with last-out maiden winners. This colt has a good shot as a howl-ween play. Stop the groaning. Win contender.

Pedigree. Howling Time (Not This Time - Werewolf, by Arch) should love the extra distance in the Street Sense, and the colt has classic conformation and breeding. Not This Time, who Romans conditioned, showed promise as a 2-year-old but was injured after his narrow defeat in the Breeders' Cup Juvenile. He's the leading second-crop sire. Howling Time's distaff line class skips to the third generation and includes the precocious Desert Party, winner of the Sanford (G2), and the UAE Two Thousand Guineas (G3).

Guntown. He regressed in the Iroquois after graduating in his second start by 4 1/2 lengths. The Steve Asmussen trainee made a tepid bid from the back of the Iroquois pack and finished sixth, beaten four lengths. However, if he can duplicate his maiden victory, Guntown could be dangerous. Live long shot.

Skippylongstocking. He could keep Sport Pepper honest on the front end. The Saffie Joseph, Jr. trainee graduated in his third start by a gaudy ten lengths when stretching out to a mile at Gulfstream Park. The race yielded a next-out winner and third-place finisher. Saffie Joseph gets 29 percent next out winners after his charges graduate. Exotics.

Pedigree: By Preakness winner Exaggerator, Skippylongstocking (Exaggerator - Twinkling, by War Chant) should enjoy the extra distance of the Street Sense. The colt's half-brother Moonlight Strike won this year's Roar Stakes at Gulfstream and finished third in the Tampa Bay Derby.

Sport Pepper. In his first start against winners and initial try over the dirt, Sport Pepper decided he liked the surface and was first at every call in a mile event at Keeneland against optional claimers. However, the  Kerry Zavash trainee was aided by the short stretch and held on to win by a length over a fast-closing rival. Sport Pepper may have company on the front end, and he'll have to find another gear in the final half-furlong to hold off the closers. Toss.

Pedigree: Sport Pepper (Classic Empire - Le Mi Geaux, by First Samurai) is by the 2016 Champion 2-Year-Old Colt, out of a Schuylerville (G3) winner. Sport Pepper's distaff line isn't as illustrious as some; however, his second dam is a restricted winner, and the blacktype in this family are capable over dirt and turf.

Red Danger. He tired to fourth, beaten two lengths in the 1 1/16 mile Bourbon Stakes, but he won both starts sprinting, including the Juvenile Sprint Stakes at Kentucky Downs. The Brian Lynch trainee gets another shot over dirt, but Red Danger showed zip, zero, nada in his dirt debut. I see no danger here. Toss.

Pedigree: Red Danger (Orb - Forget It, by Distorted Humor) is by the well-bred Kentucky Derby winner Orb, whose offspring are best over the lawn. However, he never took off as a stallion and now stands for a private fee. Red Danger is the first blacktype earner in two generations of his distaff line. However, class skips to the third generation, which includes Grade 1-winning turf router Dancing Forever and Grade 3 winner Carrumba, who tangled with champion mare Forever Unbridled and Grade 1 winner Cavorting in most of her graded starts.

Luni Sima. Questions surround Luni Sima. In his second start, a 1 1/8 mile maiden event at Saratoga, Luni Sima pressed the pace outside and took the lead at one point in the stretch. However, he couldn't hold off the late chargers and tired to third, six lengths back. Then, the Jack Sisterson trainee shortened up and beat maidens at Indiana Downs by 3 1/4 lengths. He was all out to get a mile in 1:41.56 and timed his final furlong in a pokey 14.42. So, is Luni Sima a later-maturing type, or is his class suspect? Toss.

Pedigree: Luni Sima (Keen Ice - Malibu Beach, by Tapit) has a later maturing, classic pedigree. Keen Ice's claim to fame was an upset victory in the 2015 Travers Stakes after American Pharoah and Frosted threw down suicidal fractions. The first-crop sire is awaiting his first stakes winner. Malibu Beach won two of three starts, including the 6 1/2 furlong Alyssum Stakes over three rivals. The most accomplished runner in the family is third-generation Grade 3 winning miler Blissful State.

The Street Sense has been held since 2013. In that time, three favorites have won, and two hit the board. Pace pressers and closers are most successful, and only one pacesetter has won.

This is a contentious race and many have a legitimate shot at winning.

Sport Pepper, Skippylongstocking, and Luni Sima are the most likely pacesetters and pressers, although Gun Town from the rail and Lucky Boss have the speed to be up close and personal if they break sharply.

Red Knobs is the class of the field, and he has tactical speed. Kiss the Sky also has tactical speed and a victory at this distance. Red Knobs' stablemate Howling Time was impressive in his debut and should love the extra ground. Lucky Boss will be tough to run down if he presses the pace and gets the jump on the closers.