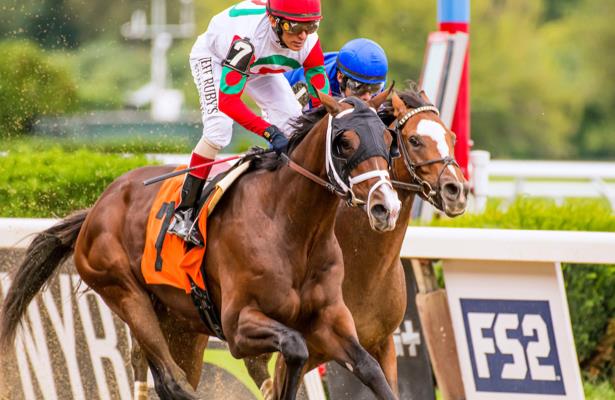 Eight well-bred colts captured racing fans' attention last week, including winners from the first crops of Liam’s Map and Conveyance. We may see a couple on the 2020 Kentucky Derby trail, including the first horse on this list...

In his Saturday debut at Belmont Park, the Todd Pletcher trainee was six-wide early, then four-wide around the far turn. He caught and battled with leader Hemlock before outlasting that one by a neck. The final time for the 6 1/2-furlong contest was 1:16.60.

Pedigree: Alpha Sixty Six has a miler/middle distance pedigree. The $400,000 Keenland yearling is the third winner out of a multiple stakes-placed sprinter/miler. Alpha Sixty Six's second dam, Sensation, won the Astarita (G3) at 2 and placed as a sprinter/miler in two stakes at 3. There’s little blacktype in the rest of the distaff line.

Bronn captured his third start Sunday upon stretching out to a mile. Jean Diaz Jr. kept a tight hold on Bronn as he pressed the early pace off a rank and erratic Bean and the Bug. Bronn took before rounding the turn, then fought with Special Day down the lane. Bronn was green. He bore out, bumping with and leaning on Special Day, and awkwardly jumped track marks but kept going, never letting Special Day get by and winning by a half length. Surprisingly, there was no inquiry. The final time was 1:38.12.

Pedigree: Bronn shows a miler/middle distance pedigree, but he also paddles with his right foreleg. The dark bay colt is the first winner for multiple stakes-winning miler Conveyance. As a side note, it’s rare to see Seattle Slew as a damsire, as his final crop are now 16-year-olds. Bronn is a half-brother to Grade 3 winning sprinter Sunrise Smarty. Their dam is a half-sister to listed stakes-winning turf miler Buying Rain. The thirdgeneration includes two-time Irish Champ Law Society, multiple graded-winning turf router Battle of Hastings and British multiple Group 1 heroine Simple Verse.

Chimney Rock surfaced in the Kentucky Downs Juvenile Turf Sprint just six days after breaking his maiden at Saratoga. The Mike Maker trainee had to steady off heels early in the race, costing him a couple of lengths. Tyler Baze shifted the colt out four-wide around the turn, and with a smoking turn of foot, Chimney Rock motored down the outside to engage Cambria in the final stages. The gallant filly wouldn’t let him by, and Chimney Rock settled for a close head loss. The final time for the 6 1/2-furlong turf stakes was 1:17.40.

Pedigree: Chimney Rock sports miler breeding. He’s the first blacktype earner in the immediate family. His hardy dam earned $435,000 the hard way in 42 starts, including a restricted stakes placing as a sprinter. Chimney Rock’s third dam, Zadracarta, was a multiple restricted stakes earner of over $338,000 in 27 starts.

HEMLOCK
(Into Mischief - Sweet Sonnet, by Seeking the Gold)

Making his second career start on Saturday, the Bill Mott trainee tracked the pacesetter Unprecedented from the inside. Junior Alvarado and Hemlock cut the corner on the far turn, and the pair gained a brief one-length lead in the stretch. Alpha Sixty Six, who took the overland route, nailed Hemlock on the wire. It was eight lengths back to the third-place horse, Unprecedented.

Pedigree: Hemlock has a miler/middle distance pedigree. The Godolphin homebred is the fifth foal out of a full sister to Wood Memorial (G1) hero Bob and John, and she’s a half-sister to stakes-winning turf miler Connie Belle. Hemlock’s second dam is Minister’s Melody, a Grade 1 earner of more than $450,000.

In his second start, stretching to a mile over the Kentucky Downs turf on Sunday, Kid Mercury and Joe Bravo tracked the pace three- and four-wide. The Graham Motion trainee kicked into gear at the quarter pole, hesitated a bit before passing rivals at the eighth pole, then picked it up to win by a length. The final time was 1:36.67.

Pedigree: Kid Mercury has the pedigree and conformation to handle middle to classic distances over both dirt and turf. The $475,00 OBS March 2-year-old sales graduate is the first foal out of a stakes-placed turf miler. The second generation includes multiple stakes-winning sprint veteran Quiet Cash and restricted stakes-winning sprinter Pocketfullofpesos. Kid Mercury’s second dam, Queen of Money, won the Santa Ynez (G3) and placed in the Santa Anita Oaks (G1).

MO HAWK
(Uncle Mo - Princess Arabella, by Any Given Saturday)

Mo Hawk made his much-anticipated debut on Friday at Los Alamitos. Breaking from the outside in the field of five, Joe Talamo kept the Bob Baffert trainee in the clear, pressing the pace four-wide. The pair went five-wide around the turn, and Mo Hawk drew clear by three lengths after some urging to win the 5 1/2-furlong maiden event in 1:04.52.

Pedigree: Mo Hawk has the pedigree and conformation to handle middle to classic distances. The $925,000 Keeneland Yearling graduate is a half-brother to multiple graded stakes-placed Ulele. Their dam was a perfect 3-for-3 on the track, including a victory in the Sunland Park Oaks. She’s a half-sister to Grade 3-placed turf mare Dyna’s Lassie, plus stakes-placed turf milers Cairo Six and Super Sky. Mo Hawk’s second dam is a full sister to Kentucky Derby runner-up Invisible Ink.

In his Friday debut at Belmont, the Jorge Abreu trainee pressed the pace four-wide, took over at the 1/8-pole and was a determined half-length winner. The final time for the six-furlong turf event was 1:12.14.

Pedigree: Nettleton has a sprinter/miler pedigree. The $320,000 Fasig Tipton March 2-year-old sales purchase is a half-brother to multiple stakes-placed sprinter/miler Turkish Tabby. His second dam, Sintress, won or placed as a sprinter in 10 of 20 starts, including three listed stakes. Nettleton is a gelding and, barring injury, we should see him competing for years to come.

Making his second start, Special Day tracked the pace from the back of the pack, five lengths off the leader under Geovanni Franco. The pair went three-wide around the turn and engaged Bronn. Special Day fought back but was bumped repeatedly, settling for second place. It was eight lengths back to the third-place finisher, Wicked Blue.

Pedigree: Special Day has a miler’s pedigree. He’s a fourth foal, and the second in the immediate family to race. His stakes-placed dam is a half-sister to the long-winded Angliana, a veteran of 31 starts and a multiple graded stakes-placed runner who also won the Aqueduct Handicap. Stephanie Jayne’s half-sister bore stakes-winning sprinter My Savannah Belle. Special Day’s second dam Pratella is a Grade 3-winning turf miler. This is the distaff line of stallions Union Rags, Declaration of War and his full brother, War Correspondent.

Mighty Heart takes Triple Crown step in a wet Prince of Wales
Rain is in the forecast for Tuesday's running of t...

Preakness Odds & Analysis: Who can beat Authentic?
Earlier this month, Authentic took control of the...

First Look: Keeneland's 8 key Breeders' Cup preps
This weekend is what dreams are made of for racing...