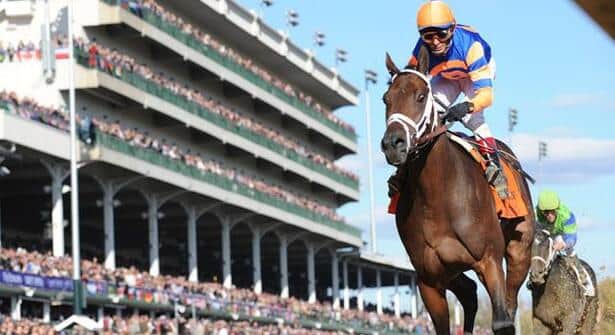 The 2020 First-Crop Sires have begun the separation between very good, OK and ehhh. As these young stallions’ offspring mature, the list will change as more crops race and define the stallions’ legacy.

The Class of 2020 includes 73 young stallions who stood their first year at stud in the U.S. and Canada in 2017. They’re an accomplished group of Breeders’ Cup winners, Classic winners and champions across all divisions.

Let’s take a look at the stallions with the most accomplished offspring, ranked by progeny earnings.

Uncle Mo, a sire of sires

This year’s crop of stallions is headlined by the breakout success of Uncle Mo as a sire of sires. 2010’s Champion 2-year-old colt Uncle Mo went to stud in 2012 and was an immediate hit. Now his most accomplished son to date, Nyquist, plus sons Laoban and Outwork, have blacktype earners of their own. The regional stallions Uncle Lino and Uncle Vinny are poised to breathe new life into their markets.

It’s no surprise that Nyquist leads the first-crop sire standings. He was a precocious youngster that carried his form through the Kentucky Derby. His daughter Vequist won the Spinaway Stakes (G1), beating Nyquist’s Lady Lilly, who placed third. Vequist followed up with a Breeders’ Cup Juvenile Fillies victory, sealing her as Champion 2-Year-Old Filly. Nyquist’s son Gretzky the Great may have sewn up Canadian Sovereign Award honors with victories in the Soaring Free and the Summer Stakes (G1).

Forecast: Nyquist offspring are winners over all surfaces, and they hit the board more than half the time. The majority of his offspring should be suited to sprints through nine furlongs, although he may get the occasional stayer, especially over the turf.

Every once in a while, an anomaly comes along, an indifferent runner who turns into a breakout sire. In 2016 Laoban was racing’s most famous maiden. His owners, McCormick Racing and Southern Equine Stable, had the “go big or go home” mindset. Laoban placed in two Grade 3 Kentucky Derby preps, but his Kentucky Derby dreams faded with a fourth-place finish in the Bluegrass (G1). After off-the-board placings in the Preakness (G1) and Dwyer Stakes (G3), Laoban got loose on the lead in the Jim Dandy (G2) and earned his sole victory by 1 1/4-lengths.

Laoban retired to Sequel Stallions, in New York, and was a hit with breeders. According to The Jockey Club’s Live Foal Report, he bred 122 mares in his first year and is the proud papa of 80 live foals. After Laoban’s daughter Simply Ravishing won the Alcibiades (G1) and his son Keepmeinmind placed in the Claiborne Breeders’ Futurity (G1), WinStar Farm snatched up Laoban, and the dark brown son of Uncle Mo stands at their Kentucky farm.

Forecast: So is Laoban a flash in the pan, or will he become a serious sire? My bet is somewhere between the two. He’ll undoubtedly get a mare class upgrade supported by WinStar’s prestigious broodmare band. However, as one of 23 stallions, Laoban needs to be something special to keep from being lost in the shuffle. Laoban’s offspring have won over all surfaces. The majority of his offspring should be suited to sprints through nine furlongs. Perhaps he’ll get the occasional stayer.

Outwork captured three of five starts, including the Wood Memorial (G1). After placing 14th in the Kentucky Derby, Outwork was retired. He was well-supported by WinStar Farm and has 70 live foals. Outwork’s son Outadore won the Kentucky Downs Juvenile Turf Sprint and placed third in the Breeders’ Cup Juvenile Turf. His daughter Samborella captured the six-furlong Seeking the Ante Stakes at Saratoga.

Forecast: Outwork’s babies are winners over dirt, mud and turf. Most need a start or two before finding the winner’s circle. They should handle middle to classic distances and could improve with maturity and distance. So far, his daughters are outperforming his sons. Not unusual, since the girls usually are more precocious than the boys. Outwork’s babies will need to up their game as 3-year-olds if he’s to remain a top-10 sire.

Moving on, the late, great Giant’s Causeway is represented by two top-10 sons, Not This Time and Brody’s Cause.

Not This Time, a half-brother to the #5 second-crop sire Liam’s Map, had his promising career cut short after his heartbreaking loss by a neck in the 2016 BC Juvenile.

Forecast: Not This Time’s offspring have won over all surfaces. They should evolve into strong milers. Some could stretch their speed to nine or 10 furlongs, especially over the lawn.

Brody’s Cause won the Claiborne Breeders’ Futurity (G1) as a 2-year-old and was third in the Breeders’ Cup Juvenile behind Nyquist. Brody’s Cause returned to win the Bluegrass (G1) at 3 but was unplaced in the Kentucky Derby and Belmont. Brody’s Cause is represented by Iroquois winner Sittin On Go, Anoakia Stakes winner Kalypso, plus Smiley Sobotka, who was a gallant second in the Kentucky Jockey Club (G2), Best Pal (G2) runner-up Girther, and Canadian multiple stakes-placed Gospel Way.

Forecast: Brody’s Cause’s offspring have won on dirt and all-weather. None of his four turf starters have hit the board, and only one of six starters over an off track have finished in the money. Most need a few starts to find the winner’s circle and are out of stamina-oriented mares. Like most of Giant’s Causeway’s sons, Brody’s Cause should be an average lower to mid-range sire who gets his share of winners. His sons are making more noise than his daughters, so expect to see some show up on the Kentucky Derby trail.

Frosted showed early promise as a 2-year-old. His Wood Memorial (G1) victory earned him a berth in the 2015 Kentucky Derby, where he placed fourth behind American Pharoah. Frosted placed in three graded stakes before winning the Pennsylvania Derby (G2). A more confident and mature Frosted was unveiled the following year. The 4-year-old colt captured the Metropolitan Handicap (G1), Whitney Stakes (G1), and the Al Maktoum Challenge (Gr.2).

Frosted’s daughter Travel Column recently won the Golden Rod (G2). His son Ten for Ten (2nd Nashua G3) and daughter Frost Me (restricted stakes-placed) make up his U.S. contingent of blacktype earners. He has a stakes winner and stakes-placed runner in Australia. Frosted was well-supported by the Godolphin broodmare band, and he has 114 foals.

Forecast: Frosted’s offspring have won over all surfaces. They should evolve into strong milers and could stretch their speed to nine furlongs. A few may win going longer, especially over the lawn, but they will be the exception. Expect his babies to hit their stride as 3-year-olds and older.

Air Force Blue raced strictly in Europe but is standing in the U.S. That was Coolmore America’s Ashford Stud's right call since this son of War Front proved that he gets winners on all surfaces. This shouldn’t come as a surprise to breeders since Air Force Blue’s pedigree is strongly dirt-oriented. His dam is a multiple stakes-placed sprinter, and his second dam is a full sister to 1994 Champion 2-Year-Old filly, Flanders She, of course, bore 2000 Champion 3-year-old filly Surfside.

Air Force Blue has one stakes-placed runner in the U.S., Take Profit, who was recently third in the Central Park Stakes over Aqueduct’s lawn.

Forecast: Air Force Blue’s offspring have won over all surfaces. Distance shouldn’t be an issue. Many will hit their stride as 3-year-olds and older.

So far, fan favorites California Chrome and Runhappy are off to a slow start at stud.

California Chrome sired three U.S. crops before relocating to Japan at the end of 2019. He’s currently ranked #13 by progeny earnings. The two-time Horse of the Year’s most accomplished runner is Cilla, who was third in the Frizette Stakes (G1).

2015 Champion sprinter Runhappy has seven winners from 37 starters. He’s currently ranked #18 by progeny earnings. Most of his babies need a few starts to hit their stride. Many of Runhappy’s offspring are out of stamina-oriented mares, so here’s hoping they’ll pick it up as 3-year-olds.