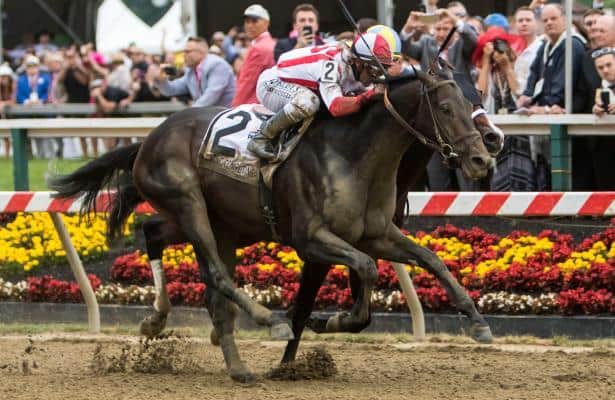 Cloud Computing silenced the spirited debate between the fans of Always Dreaming and Classic Empire when he stole the Preakness Stakes by a hard-fought head over Classic Empire. Cloud Computing had skipped the Kentucky Derby and pointed to the Preakness instead. Trainer Chad Brown didn’t let Preakness trivia or history bother him. Since 1960, horses that competed in the Preakness but not the Kentucky Derby, who didn’t win their previous race are 2 for 158. It also didn’t deter the trainer that the last horse to capture the Preakness, after last competing in the Wood Memorial, did it 16 years ago.

Bred by Stonestreet Stables, Maclean's Music (Distorted Humor - Forest Music, by Unbridled's Song) is by the prominent sire Distorted Humor and is the first foal out of the speedy multiple graded stakes winning sprinter Forest Music (Unbridled’s Song – Defer West, by Gone West). The mare has six foals of racing age, but only Maclean's Music s younger half-brother Kentuckian (Tiznow) made it to the races. He rewarded his connections with a victory in the Lazaro Barrera Stakes (G3) and a pair of third-place finishes in the Los Alamitos Derby (G2) and San Pedro Stakes.

Maclean's Music’s pedigree indicated that he would be fast, and possibly fragile. His sire Distorted Humor, damsire Unbridled’s Song and second damsire Gone West are all close descendants of the Brilliant/Classic Chef-de-race sire, Mr. Prospector, and his sire Raise A Native, a source of brilliance and precociousness.

Under the tutelage of Steve Asmussen, Maclean's Music gave a hint of things to come while breezing six furlongs in 1:10 during a gate work. The large bay colt made an eye-popping debut at Santa Anita in the spring of his three-year-old season. He immediately became the buzz of the racing world.  Mike Smith was just a passenger as Maclean's Music blazed six furlongs effortlessly through fractions of 12.24, 43.48, and 55.05, galloping under the wire 7 1/4 lengths in a final time of 1:07.44.

Maclean's Music’s brilliant unveiling caught the notice of Andy Beyer, who bestowed a 114 speed figure on the talented son of Distorted Humor.  Excitement turned to disappointment, however, when Maclean's Music’s budding career was cut short after suffering complications from surgery on a fractured splint bone. This is a common injury, and usually, horses return no worse for wear after rest.

Maclean's Music retired to Hill ‘n' Dale in 2013. The second-crop sire is the proud poppa of 46 runners, 19 winners and four stakes winners. Cloud Computing is his first graded stakes winner.  Maclean's Music is #2 on the Second-Crop Sire List by earnings and leads the list by number of stakes wins.

Cloud Computing is the fifth foal produced by his dam Quick Temper (A.P. Indy – Halo America, by Waquoit), and first to earn blacktype status. There are stakes winners throughout Cloud Computing’s female family. Additionally, the colt’s distaff side is filled with sound, rugged competitors.

Cloud Computing’s dam was bred by Hill 'n' Dale Farms & John Franks. The filly was campaigned by Jerry Hollendofer through 26 starts.  Although she never won a stakes race, Quick Temper was a good allowance class mare and placed in two G3 and one G2 stakes at distances ranging from 1 1/16 miles to 1 1/4 miles.

Quick Temper bore six foals. Five are of racing age. Four have won, and all have placed. Most have started over turf and mud. They’ve occasionally placed, but none have won over these surfaces.

Quick Temper is a half-sister to the multiple Group/Graded stakes placed sprinter and sire, Marino Marini.

Cloud Computing’s second dam Halo America (Waquoit - Ameriangel, by Halo) was one of only two of her dam’s foals to race. Bred by five-time Eclipse Award winner John Franks, the pretty gray filly hit the track when she was three and racked up a 40-15-8-2 ($1,460,992) race record in four years. Winning from seven to nine furlongs, Halo America bested the greatest mares of her generation, including Champions Serena’s Song, Escena, Jewel Princess, Heavenly Prize and the great mares Paseanna and Different.

Cloud Computing’s third dam is a potent source of the bloodlines of the Brilliant/Intermediate Turn-To, as she’s the product of mating Turn-To’s grandson Halo, to Ameriturn, a daughter of Turn-To.

Farther back in Cloud Computing’s pedigree are the ancestresses of California Champion Free House and Maryland’s Champion Mare and Horse of the Year Shine Again. 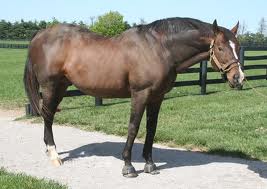 Cloud Computing’s second damsire Waquoit was a veteran of stakes ranging from six furlongs to 1 1/2 miles. His third damsire, the black, ornery Halo, sired two Kentucky Derby winners. The Brilliant/Intermediate Chef Turn-Two is Cloud Computing’s fourth damsire.  All four damsires are noted large heart sires and have passed these genes to their daughters.

Maclean’s Music has five foals of racing age out of A.P. Indy mares. Three have started/won, and one is a stakes winner.

Distorted Humor has a strong affinity with A.P. Indy mares. From 105 starters, 79 are winners, and 14 are stakes winners. Graded stakes winners bred on this cross include Haskell hero Any Given Saturday, Vosburgh champ Joking, and Brethren, the stakes-winning half-brother to Super Saver.

Cloud Computing outran his odds in the Preakness. The colt’s pedigree indicates that he should handle 1 1/2 miles.  His running style is to sit two to three lengths off the pace and close the gap through the stretch, which is optimal for the Belmont Stakes.

As of this writing, it's still up in the air regarding Cloud Computing’s participation in the Belmont Stakes, scheduled for June 10. The colt is lightly raced with only four starts under his girth, and he had six weeks off between the Wood Memorial and Preakness. According to reports by his trainer, Chad Brown, Cloud Computing exited the Preakness no worse for wear. However, the trend among some connections is to race graded stakes horses sparingly. The forecast is cloudy whether or not we’ll see the Preakness winner emerge before the summer season at Saratoga.