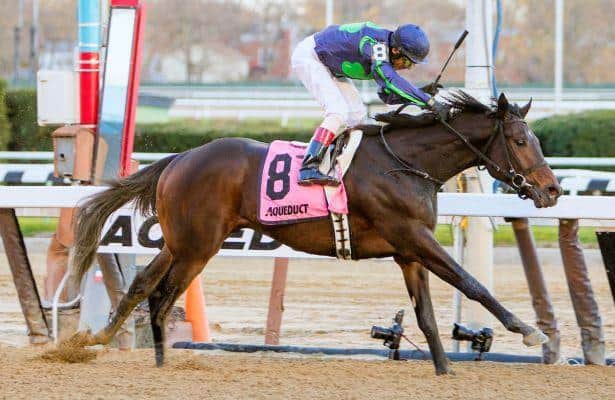 Mo Town has that Triple Crown contender groove thang going on. His assertive victory in the Remsen Stakes placed Mo Town’s name on the 2017 Kentucky Derby chart with a bullet.

Guided by the expert hands of John Velazquez in the Grade 2 race at Aqueduct, Mo Town settled in the clear on the outside of his rivals. He stalked the runaway pace setter Takaful for much of the early race.

Takaful set slow early fractions of 23.47, 48.84 and 1:14.02. Mo Town challenged the faltering Takaful at the ¼ pole and Uncle Mo’s son hit another gear at the 1/8 pole when asked for his best. The pair distanced themselves from the competition, grooving under the wire 2 ½ lengths in front. No Dozing, a son of Union Rags, made up ground from seventh place to capture second place, 3 ½ lengths ahead of the tired Takaful. Mo Town’s final time for the 1 1/8 miles was 1:51.58 over a fast track. He traveled his last eighth in a sharp 12.64, per Trakus.

Mo Town (Uncle Mo - Grazie Mille, by Bernardini) was bred by John D. Gunther & Eurowest Bloodstock. He spent his foal years at Glenwood Farm, and they consigned the bay colt to the 2015 Keeneland September Yearling auction. Mo Town’s good looks caught the eye of veteran trainer Tony Dutrow, and in conjunction with Team D Racing, a racing partnership formed by Dutrow, purchased the colt for $200,000. 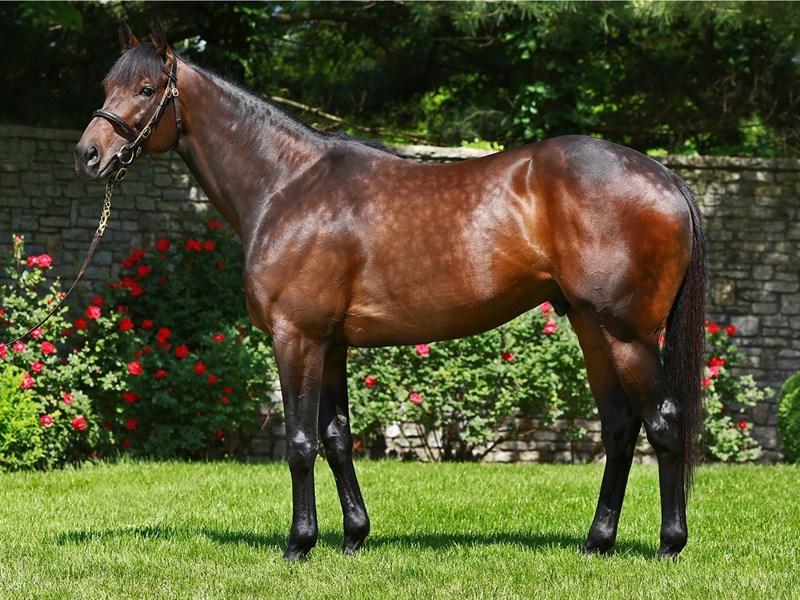 The 2010 Champion Two-Year-Old Colt Uncle Mo (Indian Charlie - Playa Maya, by Arch) was considered by many to be the most talented colt of his generation. The bay son of Inidan Charlie has carried that brilliance into his stud career as the leading first and second crop sire.

The bulk of Uncle Mo’s stakes winning offspring are miler to middle distance types on dirt. Eight of them are stakes winners at 1 1/8 miles. There are few opportunities for American horses to compete at 1 ¼ miles or farther, especially over dirt. Uncle Mo already has a Kentucky Derby winner on his list of stallion achievements and bred to mares with stamina-oriented bloodlines, Uncle Mo could sire additional winners at classic distances.

Female Family
Mo Town has an artful blend of miler speed and middle distance stamina in the first two generations of his distaff line. Two of his last three dams are the highest earners in their immediate families. The class in Mo Town’s family extends to his fifth dam My Sister Kate, a full sister to the Brilliant Chef-de-Race, Raise a Native.

Mo Town’s dam Grazie Mille (Bernardini - Molto Vita, by Carson City) had her promising career cut short after only two starts. The dark bay placed second in a six-furlong maiden contest before winning her second and final start at 1 mile and 70 yards.

Grazie Mille is off to a great start as a broodmare with Mo Town as her first foal. Mo Town has two half-sisters; an unnamed two-year-old by Pioneerof the Nile and an unnamed yearling by Super Saver. Neither one has sold at auction.

Grazie Mille has two blacktype earning half siblings. Both were capable at 1 1/8 miles or farther. Jaguar Paw (Giant’s Causeway) competed in allowance class mile races for much of his career. As a five-year-old, Jaguar Paw captured the Three Coins Up Stakes at 1 1/8 miles before placing third in the Philip H. Iselin Stakes (G3) at the same distance.  Venetian Mask (Pulpit) spent his career in the allowance and claiming ranks as a miler. In the last start of his 20-race career, Venetian Mask placed second in the 1 1/8 mile BC Premier's Handicap (G3) at Hastings.

Damsire
Bernardini (A.P. Indy - Cara Rafaela, by Quiet American) raced for one year, captured six of eight starts and trotted off to the breeding shed with an Eclipse Award for Champion Three Year Old. Since starting stud duties in 2007, Bernardini has sired 31 graded stakes winners, including multiple G1 victors, Stay Thirsty, To Honor and Serve, Alpha, and Cavorting.  The bulk of Bernardini’s progeny are best up to 1 1/8 miles, although three of his babies have won at 1 ¼ miles or farther. Two, Alpha and Stay Thirsty, have won the Travers Stakes.

Bernardini is only 14 years old, and his daughters are just starting to bear offspring.  His daughters have produced 222 named foals. 83 have started, and seven are stakes winners. A stallion’s progeny records often give a clue to the distances and surfaces his daughter’s offspring will prefer. I expect that as a broodmare sire, Bernardini will have a good number of stakes winners up to 1 1/8 miles, and may get a few winners at longer distances.

Mo Town’s second damsire Carson City (Mr. Prospector – Blushing Promise, by Blushing Groom) is a Brilliant/Intermediate Chef-de-race. This attribute carries over to his daughters’ offspring, as they are overwhelmingly sprinter/miler types. The handful that can go longer are by stallions noted for endurance.

Expectations
Mo Town has solid middle-distance attributes in his pedigree. The colt has a long neck tied into a deep, well-angled shoulder. He has a short back and well-proportioned hindquarters.  Overall, Mo Town has the lean countenance of a route horse. He'll undoubtedly grow and fill out over the course of the next few years. Living up to his moniker, the bay colt has flashed all the right moves on the track.  He has a smooth, deceptively high cruising gait, yet Mo Town can kick into another gear when given his cue.

Mo Town displayed a professional demeanor in his races, but has yet to be tested by more accomplished rivals. He took advantage of slower early fractions in the Remsen Stakes, caught a tired pace setter and pulled away. The only rival making up ground at the end was No Dozing. Mo Town’s late race internal fractions of 24.79 and 12.64 while not under serious pressure, is a good indication of something left in the tank.

The last Remsen Stakes hero to wear the roses was Thunder Gulch, 23 years ago. Recent Remsen runners-up Wicked Strong and Frosted rounded out the superfecta of their respective Kentucky Derbies. However, every year is different, and it is only a matter of time before we have another Remsen/Kentucky Derby double.

Mo Town’s pedigree for 1 ¼ miles might be borderline, yet, pedigree is just one facet of a horse’s scope. Conformation, intelligence, determination to win, plus the human factors of conditioning and race riding are all equally important. Mo Town’s talent and professional attitude ensure that he’ll be an interesting Triple Crown prospect this year. Mo Town is steadily breezing at Payson Park in Florida and may return to Aqueduct for the Gotham Stakes on March 4.

by gracious permmision of Kim Dutrow.