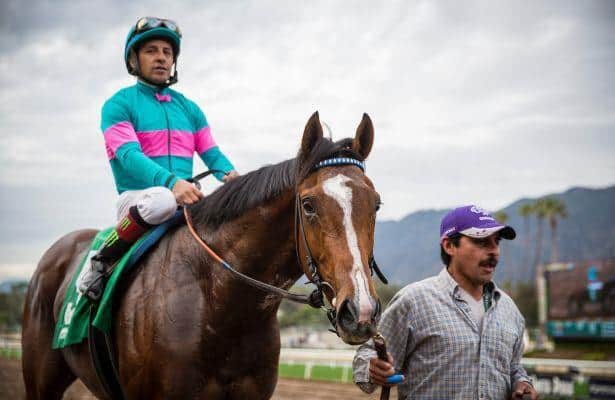 Gormley bounced back from a seventh-place finish in the Breeders’ Cup Juvenile (G1) to prevail in the Sham Stakes after an exhilarating battle with American Anthem.

From the onset, the newly turned three-year-olds converted the Grade 3 event into a private match race. The favorite, American Anthem, held the lead on the inside of the sloppy Santa Anita dirt course. Gormley was glued to his side as the pair quickly separated from the rest of the field. The determined colts fought through splits of 22.54, 45.46, 1:10.13 1:22.70. Jockey Victor Espinoza pushed the more experienced Gormley to prevail by a narrow head over the last out maiden winner American Anthem in 1:35.89 for the mile contest. It was 13 lengths back to the third-place finisher, Big Hit.

Gormley (Malibu Moon - Race to Urga by Bernstein) was bred by Castleton Lyons and Kilboy Estate. He went through the 2015 Keeneland September Yearling auction but didn’t meet his $150,000 reserve, possibly due to suspected breathing issues, which, obviously, haven't hindered him. The bay son of Malibu Moon was later purchased by Jerry and Ann Moss, owners of many fine stakes winners, including superstar Zenyatta.

The Moss’s regular trainer John Shirreffs conditioned Gormley for a 4 ¼-length debut maiden win in September. A month later, the colt returned to score a 3-length front-running victory in the FrontRunner Stakes (G1) over the more experienced stakes winner, Klimt.

In his first test around two turns, Gormley pressed the early pace from the far outside in the Breeders’ Cup Juvenile, but couldn’t keep up the heat. He finished mid-pack in seventh place.  Gormley has a 4-3-0-0 ($296,000) record and is in second place on the 2017 Kentucky Derby leaderboard with 20 qualifying points. 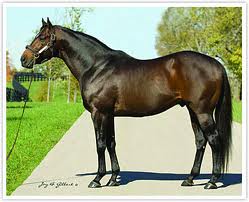 Five of Malibu Moon offspring have won at 1 ¼ miles or farther in the US, including the 2013 Kentucky Derby Champ Orb, CCA Oaks winner Funny Moon, Personal Ensign Handicap heroine Ask The Moon, Delaware Handicap winner Life At Ten, and Malibu Pier, who captured the Beverly Hills Handicap on turf.

Four of Gormley’s first five dams are blacktype earners. Class and turf affinity is evident throughout the family.

Gormley is the first foal out of Race to Urga, a stakes winning turf miler conditioned by Christophe Clement.  The bay mare started eight times, all over the lawn, and finished out of the money only once. All of her victories were at 1 1/16 miles, including the Wait a While Stakes over the Gulfstream Park sod. The stakes contest was Race to Urga’s final race, and the mare retired with an 8-5-2-0 ($182,816) record.

Race to Urga (Bernstein - Miss Mambo, by Kingmambo) was the first foal and only stakes winner produced by her dam. Race to Urga has a two-year-old colt by Smart Strike and a yearling colt by Gio Ponti, both unnamed.

Race to Urga's dam Miss Mambo (Kingmambo - Troika, by Strawberry Road (AUS)) raced in England, Ireland, and France during the early stages of her career as a turf miler before shipping to the US. She won one stakes and placed in four others, including two French Group Stakes.

Gormley’s third dam Troika didn’t earn blacktype, but she was a good allowance class competitor, hitting the board in six of eight starts between 1 1/16 to 1 ¼ miles on the lawn for trainer Bill Mott.

Gormley’s fourth dam was 1986 Champion Grass Mare Estrapade. She competed successfully at top levels at distances ranging between 1 1/16 miles and 1 ¾ miles. Estrapade beat Champion Theatrical in the Arlington Million and in her final start, the gallant mare gave Manilla and Theatrical all they could handle before finishing third in a thrilling edition of the 1986 Breeders’ Cup turf. Estrapade was a half-sister to 1990 Champion Older Male and Horse of the Year Criminal Type and to Isopach, a multiple group winner in Italy.

Gormley’s damsire Bernstein (Storm Cat – La Affirmed, by Affirmed) raced for two years and won four of eight starts, including two Group 3 sprints. After capturing his second of two Group 3 sprints in Ireland, the well-bred son of Storm Cat made his final start in the River City Handicap, contested at 1 1/8 miles on the Churchill Downs lawn. He found the distance too far and placed fifth after tracking the pace.

At stud, Bernstein evolved into above average sire. He shuttled to Argentina and was twice leading sire in that country before euthanized at age 14 after developing complications from colic in 2011.

Bernstein’s US offspring are generaly precocious types with distance limitations, yet equally adept on dirt, turf, and synthetics. Most are milers, but Bernstein has sired four stakes winners at 1 1/8 miles and one at 1 ¼ miles in the US. All victories were over the turf. Bernstein’s most accomplished progeny include 2015 Champion Grass Mare Tepin and 2014 Breeders’ Cup Mile hero Karakontie.

Bernstein’s daughters are young and just starting to bear offspring. Three of his four graded stakes winners in the US are three-year-olds. Besides Gormley, Bernstein is the damsire of Breeders’ Cup Juvenile Fillies heroine Champagne Room, Lovely Bernadette, winner of the one mile Rags to Riches Stakes (G3), and Sistas Stroll, a Grade 3 winner at 1 1/8 miles on turf.

Malibu Moon has four winners from five starters out of daughters of Bernstein. None have competed beyond 1 1/16 miles, and Gormley is the only stakes winner.

Gormley’s second damsire is the internationally acclaimed stallion Kingmambo (Mr. Prospector – Miesque, by Nureyev). The stakes-winning turf miler excelled as a sire and damsire of long-winded runners and was named a Classic/Stout Chef-de-race.

Gormley has plenty of early speed and so far, has displayed a pace setting/pressing running style. He’s a large, muscular bay colt with the conformation of a miler. Gormley has high knee action with average leg extension. He runs straight with no paddling movements or bearing in or out. He’s appeared professional in each start, flashing speed to gain position, then relaxing for his jockey.

Since the Sham Stakes was first contested in 2001, only two colts have hit the board in both the Sham and the Kentucky Derby; Empire Maker finished second in both races in 2003 and in 2005, Giacomo was third in the Sham before a successful trip to Louisville. Overall, most of the Sham Stakes victors have continued their careers as sprinter/milers.

It’s hard to determine how far Gormley will want to travel. His pedigree and conformation indicate that he should handle 1 1/16 miles, yet may find 1 1/8 miles at the top of his distance range against top company. The colt has turf attributes and a gait indicating that he may mature into a decent turf horse if his Triple Crown hopes don’t pan out.

Gormley may resurface in the Robert B. Lewis Stakes on February 4, but will probably wait for the San Felipe Stakes on March 11.