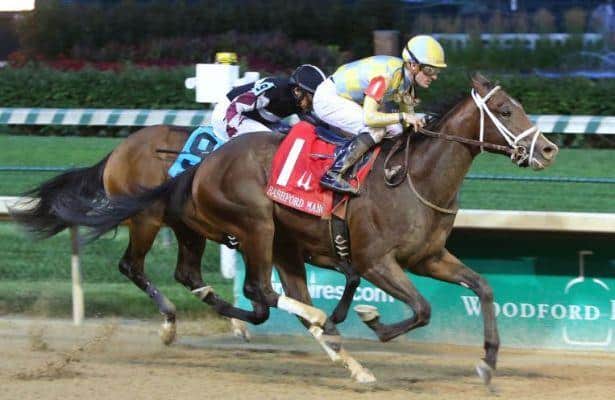 A protostar may have been unveiled in the 2016 Bashford Manor Stakes (G3). The six-furlong event is generally won by a precocious sprinter of average ability. This year, Classic Empire defied his pedigree and overcame a slow start to earn his way into the Churchill Downs winner’s circle.

Classic Empire was slow leaving the gate and broke outward from post one. This is typical of a youngster making only his second start.  In a well-timed ride by Julien Leparoux,  the bay colt cut the corner on the final turn and floated through the stretch to pass a tired, but game Recruiting Ready by a half-length. Classic Empire completed the six furlongs in in 1:09.39, just .24 off of the stakes record set by Kodiak Kowboy in 2007. That one went on to become 2009 Champion Male Sprinter.

Classic Empire (Pioneerof the Nile - Sambuca Classica, by Cat Thief) was bred by Steven & Brandi Nicholson. He sold to John C. Oxley for $475,000 in the 2015 Keeneland September Yearling Sale. Churchill Down’s leading trainer Mark Casse has conditioned the colt to a 2-2-0-0 ($86,400) race record. 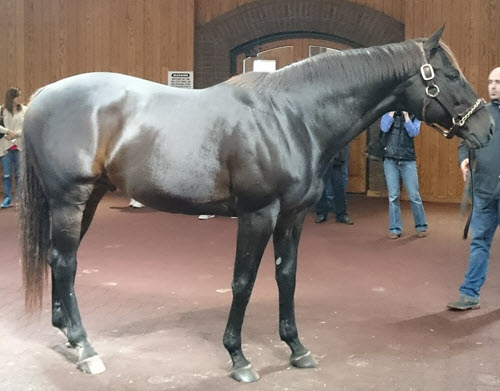 Pioneerof The Nile (Empire Maker - Star of Goshen, by Lord At War (ARG)) had an unremarkable juvenile season. A late bloomer, the Bob Baffert trainee gathered a four race win-streak, sweeping the Cash Call Futurity, Robert B. Lewis Stakes, San Felipe, and Santa Anita Derby.  Pioneerof The Nile put in a strong effort in the Kentucky Derby, handing Zayat Racing Stable the first of their three second-place finishes in the Classic race.  After placing a discouraging eleventh in the Preakness Stakes, Pioneerof The Nile was given time off. While preparing for a fall campaign, he sustained a soft tissue injury to his left foreleg and was retired. The dark bay colt ended his career with a 10-5-1-1 ($1,634,200) record.

Pioneerof the Nile and his sire Empire Maker have shown a high affinity for mares descending from the Storm Cat line.  His blacktype earners with this breeding cross include, American Pharoah and the stakes placed Charm City Girl (Storm Cat), Pioneerof the West (Forestry), and Awesome Jill (Lion Heart).

Empire Maker’s progeny out of daughters of the Storm Cat line include Graded winners Bodiemeister (Storm Cat) and In Lingerie (Storm Cat); plus stakes winners Charm the Maker (Giant’s Causeway), Magical Feeling (Forestry), and stakes placed Coastal Breeze and Temper Temper.  Empire Maker has one foal out of a Cat Thief mare, a winner of over $71,000.

Classic Empire is a direct descendant of the brilliant juvenile and rene-de- course, Alanesian.  She is the dam of Boldnesian, who carries on the most successful branch of the Bold Ruler sire line, thanks to his son Bold Reason. That one sired only three crops before his premature death. Triple Crown Champ and legendary sire Seattle Slew was a member of Bold Reason’s final crop. Classic Empire’s distaff line has a history of bearing precious stakes winners.

Classic Empire’s dam Sambuca Classica (Cat Thief - In Her Glory, by Miswaki) tried to enter the winner’s circle eight times in three years but was unsuccessful. She did finish third in a trio of races. Her owners, Steven & Brandi Nicholson, decided that racing wasn’t the forte of Sambuca Classica and retired the mare with an 8-0-0-3 ($13,896) record.

Whatever Sambuca Classica lacked on the track, she is more than making up for it as a broodmare. The young mare has four foals of racing age, and all enjoy having their photos taken in the winner’s circle. With the inclusion of Classic Empire, three of the four foals are stakes winners.

Sambuca Classica’s son Anytime Magic (Fusaichi Pegasus), captured a pair of minor sprint stakes races as a two-year-old. The mare’s daughter Uptown Twirl (Twirling Candy), placed in the Anoakia Stakes at Santa Anita as a juvenile and won the Surfside Stakes and Pleasanton Oaks at three.  The Chestnut mare has a yearling colt by Concord Point but slipped her foal this year.

Classic Empire’s second dam In Her Glory, won the seven-furlong Garland of Roses Handicap and was third in a duo of Grade 1 races, the Acorn and Gazelle, as well as the Grade 3 Davona Dale Stakes.  She was the only stakes winner of thirteen foals produced by Forever Waving.  Classic Empire’s fourth dam, the unraced Rene-de-course Quillesian, was a member of the last crop of the legendary Princequillo. Quillesian bore the Champion Three-Year-Old Filly Revidere.  Quillesian’s full sister Princessnesian is the grand-dam of Harlan’s Holiday. 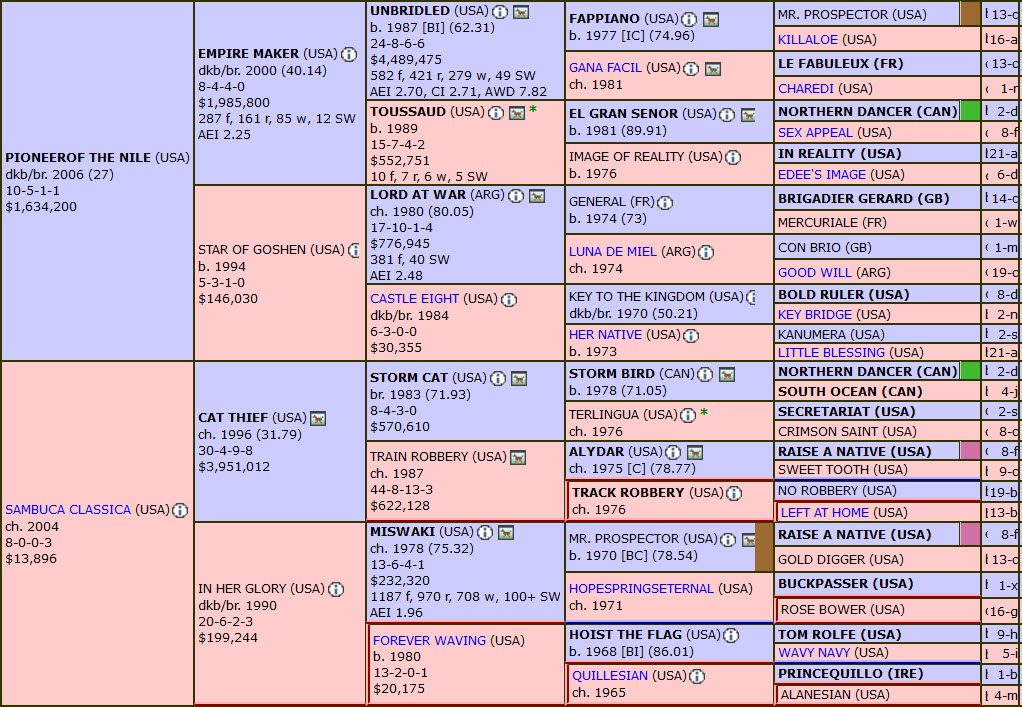 Note that the red and blue lines under the names on the distaff side indicate large heart (red) and double-copy (blue). "Double copy" mares receive the gene through their sires and dams. 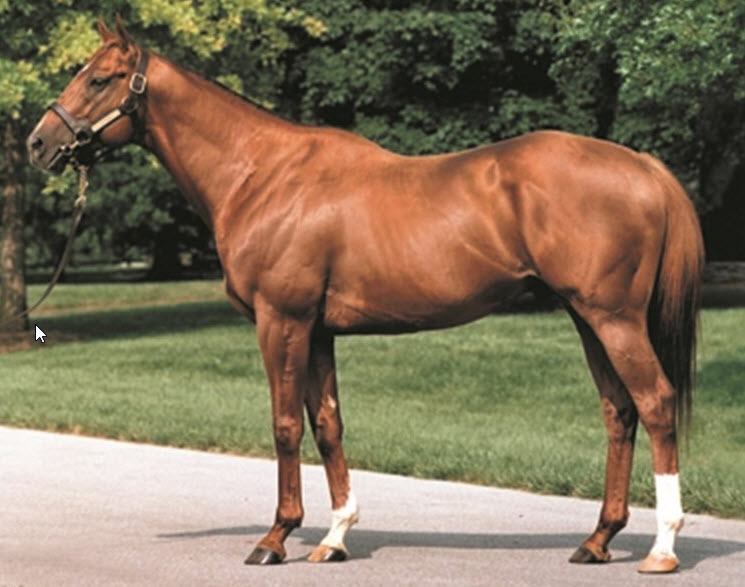 Out of his thirty career starts, Cat Thief is best remembered for stealing the 1999 Breeders’ Cup Classic and paying a generous $41.20 to win.  Up to that point, Cat Thief had only won three times in 18 starts and was happy to settle for second or third place in most of those races.

Despite his illustrious breeding, Cat Thief’s stud career was mediocre, considering his breeding. He was a decent regional stallion for Pennsylvania.  Cat Thief’s only Grade 1 winner was a Puerto Rican Champ from 13 crops of racing age. He currently stands in Korea.

Cat Thief is the damsire of 379 foals of racing age. 256 made it to the track. 186 are winners, and of those, 15 are stakes winners. They include Starlet Stakes (G1) heroine Street Fancy (Street Sense), and a handful of Grade 3 and listed winners. Cat Thief’s daughter’s stakes offspring are sprinters to middle-distance types, although they haven’t had many opportunities to run farther. 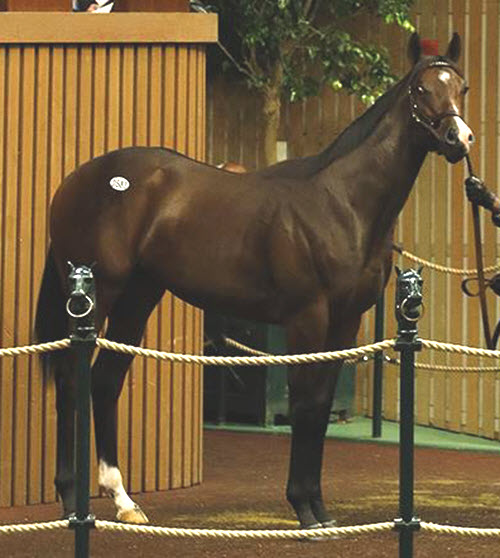 Classic Empire Is aptly named. He inherited his precocious nature from his distaff line, yet the colt has the pedigree to handle classic distances. Classic Empire’s distaff line carries the large heart gene. His second - fourth damsires all carried the large heart gene. The performance of Sambuca Classica’s offspring could indicate that she is passing a dominant aspect of the gene to her offspring. It is conjecture at this point, but something to keep in mind.

Classic Empire runs straight with no paddling or excessive leg movement. He has a nice, long stride and practically floated over the Churchill dirt. He’s only raced twice, but Classic Empire has shown the professional ability to settle early and make a late run, which bodes well for him in longer contests.

A traditional conformation photo wasn’t available. However, current photos and video observation reveal that Classic Empire is a beautifully conformed colt. He has a nicely proportioned frame and athletic movement.  Classic Empire has a deep, well-angled shoulder, muscular chest, and powerful hindquarters. Classic Empire isn’t overly muscular, and should grow into a spectacular three-year-old with the conformation to prefer running middle to classic distances.

Assistant trainer Norman Casse remarked after the Bashford Manor Stakes that Classic Empire will continue his career at Saratoga. Perhaps we’ll see Classic Empire in the 6 ½ furlong Saratoga Special on August 14 and the seven-furlong Hopeful Stakes on September 5. Classic Empire is a colt to keep on your 2017 Kentucky Derby contender watch list.

Photo of Classic Empire used with permission of Warrendale Sales.