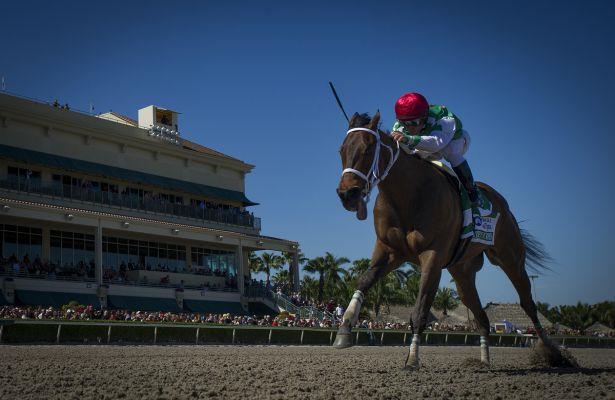 Cathryn Sophia dazzled raceing fans with another spectacular performance on Saturday. The 2016 Kentucky Oaks contender galloped to a seven length victory in the Davona Dale Stakes (G2), carrying jockey Javier Castellano past the finish pole in 1:36.61 for the one-turn mile. Lewis Bay outran a tiring Dearest to take the place money.

Cathryn Sophia (Street Boss - Sheave, by Mineshaft) was bred by Robert T. Manfuso. The bay filly sold for a bargain $30,000 at the 2014 2014 Fasig-Tipton Fall Yearling Sale at Timonium to Chuck Zacney’s Cash is King LLC. The stable campaigned Champion 3YO Afleet Alex. The daughter of Street Boss is conditioned by John Servis, trainer of 2004 Kentucky Derby hero Smarty Jones.

Cathryn Sophia has been the favorite in every start. She wired the field by 12 ¾ lengths in her debut, a six-furlong maiden race at PARX last October. Two months later, Cathryn Sophia laughed at an overmatched field of five fillies in the seven-furlong Gin Talking Stakes at Laurel Park, again going wire-to-wire, winning by 16 ¼ lengths. In her three year old debut, John Servis’ charge broke a step slow and raced off of the pace for the first time in the seven-furlong Forward Gal (G2). She won that race by 5 ½ lengths. The filly has compiled $335,520 and won all four starts of her career by a combined margin of 41 1/2 lengths. 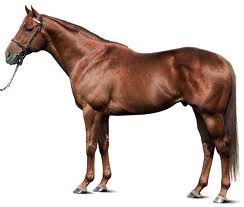 Street Boss retired to stud at Darley for an initial fee of $25,000. His first crop hit the track in 2012, along with the progeny of Curlin, Big Brown, Midnight Lute and Henrythenavigator. The sire’s first crop included four stakes winners and propelled him to fifth place on the leading Freshmen Sire list. Street Boss was in the top tier of leading sires through his third crop. To date, he has sired five graded stakes winners, led by Arkansas Derby winner Danza and King’s Bishop hero Capo Bastone.

Street Boss is passing his formidable speed to his progeny. The majority of his offspring are best from sprints to 1 1/16 miles. However, Street Boss is capable of getting winners at 1 1/8 miles. His sons Danza won the Arkansas Derby (G1) and Metaboss was victorious in the El Camino Real Derby. Street Boss also has a couple of allowance and maiden winners at the distance over dirt and turf. Street Boss is represented by one winner each at 1 1/316 miles and 1 ¼ miles. Both victories were over Polytrack in England.

The first three generations of Cathryn Sophia’s distaff line have produced five stakes winners proven at sprints. A couple have placed at 1 1/8 miles.

Cathryn Sophia’s breeder Robert T. Manfuso also bred and owns her unraced dam Sheave (Mineshaft - Belterra, by Unbridled).  The three year old filly is the first-born. She has a two year old half sister, Great Craic (Bullsbay), and an unnamed yearling half sister by the Australian sire Denman.

Sheave has seven half siblings of racing age. All raced, but only two are winners, including Taketheodds (Street Sense) a restricted winner at seven furlongs.  Sheve’s half sister Sister Dyer (Pulpit) bore Bulheaded Boy (Bullsbay) who placed in stakes from 6 furlongs to 1 1/8 miles.

Cathryn Sophia’s second dam Belterra (Unbridled - Cruising Haven, by Shelter Half) hit the board in all seven starts, including four victories. She was a precocious youngster and won the Golden Rod (G2) over a sloppy track, beating Take Charge Lady. A year later, Belterra placed third in a trio of races to the likes of Take Charge Lady in the Ashland (G1); Gold Mover and Harmony Lodge in the Hurricane Bertie at 6 ½ furlongs, and she was third in the 1 1/8 mile Bonnie Miss (G2). Other than Belterra, there is one other stakes winner in the third generation of Cathryn Sophia’s distaff line, the multiple G2 winning sprint veteran Royal Haven (Hail Emperor). 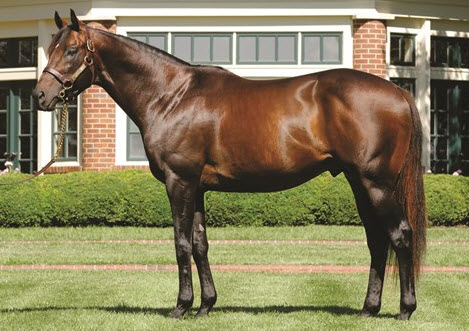 Mineshaft's offspring are slow to develop. They are victorious from 5 furlongs to 1 ½ miles, primarily over dirt. His top earners include Effinex, winner of the 1 1/8 mile Clark Handicap (G1) and 1 ½ mile Excelsior Stakes (G3); Multiple Grade 1 heroine It’s Tricky; and Florida Derby (G1) hero Dialed In.

Mineshaft is a young damsire, represented by 137 runners.   Mineshaft is the damsire of eleven stakes winners. So far, Leave the Light On and his half brother Harlan's Pure are the only ones who have won at 1 1/8 miles and beyond. Mineshaft is certainly capable of offering stamina attributes to his daughters’ offspring.

Street Boss has three starters, out of Mineshaft mares. All are winners.

Cathryn Sophia has the pedigree to successfully stretch out to 1 1/8 miles, but her muscular conformation resembles that of her sprinter sire.

No adequate conformation photos are available. However, I’ve observed that Cathryn Sophia is of average height. She is very powerful throughout her shoulders and hindquarters and has a wide chest. Despite her sprinter appearance, she has a nice stride with good reach. Trainer John Servis indicated that he may aim for the Gulfstream Park Oaks (G2) on April 2. It would be Cathryn Sophia’s first attempt at two turns.

It’s hard not to compare Cathryn Sophia to the undefeated West Coast sensation, Songbird. The 2YO Champion filly is larger and has a more favorable pedigree for longer distances. She’s also defeated higher level stakes winners and is comfortable traveling 1 1/16 miles.  Should the two meet in the Kentucky Oaks, the race could prove to be more exciting than this year’s Kentucky Derby.