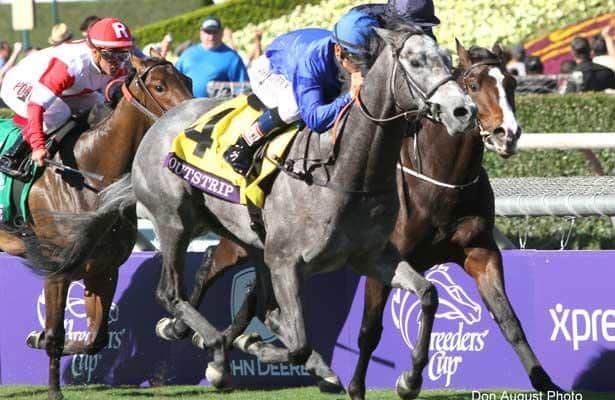 Another edition of the Breeders’ Cup Juvenile Turf is in the record books. For the third straight year the European colts outclassed the Americans, as Outstrip and Giovanni Boldini finished one-two. Let's take a closer look at the pedigree of the pretty gray Outstrip.

OUTSTRIP(GB) (Exceed And Excel (AUS) - Asi Siempre, by El Prado (IRE))
For the third straight year the European colts outclassed the Americans. The 6-5 favorite Bobby’s Kitten broke sharply on top and set torrid fractions of :22.27, :45.70 and 1:09.53 in the 1 1/16 mile race, pressed by All Cash. The Irish colt Home School followed in third. Giovanni Boldini settled into fourth early and moved up the rail at the ¾ pole to track in second, while Outstrip lingered at the back of the pack for much of the race. Rounding the far turn, Bobby’s Kitten’s lead narrowed as Giovanni Boldini drew closer. All Cash and Home School dropped out of it and Bon Accord made a mild run. Meanwhile, Outstrip unwound from the back of the pack and looking much like his dam, flew through the stretch to nip Giovanni Boldini by ½ length. A stubborn Bobby’s Kitten finished third, 1 ¼ lengths behind Giovanni Boldini. The final time of 1:33.20 is the new stakes record for the Breeders' Cup Juvenile.
Outstrip had a win-lose cycle in previous races. He finished third against Group 1 runners in the Dewhurst Stakes, beaten only 2 ¾ lengths over soft ground. Last year’s Juvie Turf hero George Vancouver, was also third in the Dewhurst, so this is a key prep to watch for next year. Outstrip is a Darley home bred, raced by Godolphin Racing. The pretty gray colt was handed over to trainer Charlie Appleby in July switching from the stable of Godolphin's main guy Saeed bin Suroor. The Juvenile Turf hero was Mr. Appleby's first runner in the Breeders' Cup. Outstrip has a 5-3-1-1 ($731,034) race record.
Sire: 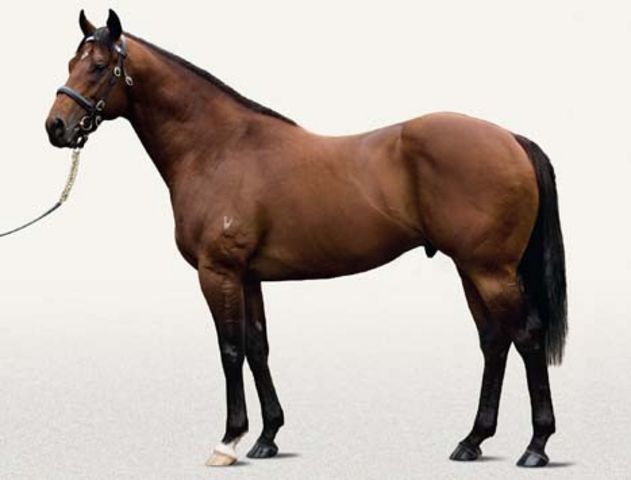 Outstrip was one of the best-bred colts to race in the Juvie Turf. His sire Exceed and Excel, a son of the great Danehill, was undefeated as a three year old, winning two Group 1's, two Group 2's and a Group 3 race. His dominance earned him the title of Champion Australian Turf Sprinter. Exceed and Excel retired after two years of racing with a 12-7-1-0 (A$1,282,275) race record.
Exceed and Excel transferred his talent to the breeding shed and has been a leading sire of juveniles for four straight years. The proud sire of 75 stakes winners, His offspring are best as sprinter/milers, although three of his stakes winners have succeeded at 1 ¼ miles and beyond. His offspring include the multiple Group 1 hero Excelebration, who finished fourth in last year's Breeders' Cup Mile, Margot Did, winner of the King's Stand Stakes (Gr. 1) at Ascot.
Female Family: 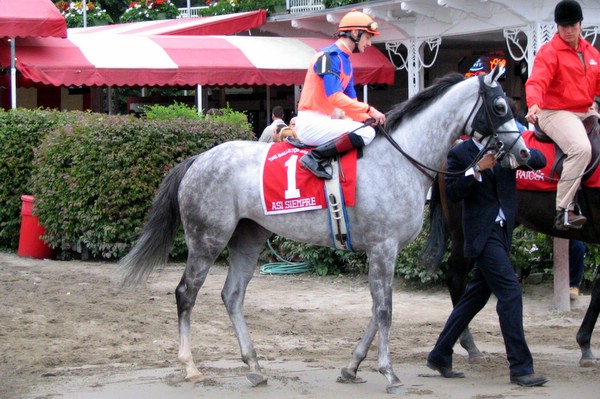 Outstrip’s dam Asi Siempre is more familiar to American racing fans. She began her racing career in France and earned status as a Group 3 placed runner. Once Asi Siempre hit US shores, the gray mare raced in 14 graded stakes over turf and Polytrack. Asi Siempre’s greatest victory came in the Juddmonte Spinster, contested at 1 1/8 miles over Polytrack. She retired at the age of five and retired with a 21-7-5-2 ($953,300) record. Outstrip is her first foal to race. Asi Siempre has an unraced 2009 Distorted Humor filly.
Outstrip is inbred to two notable blue hens. The first, Natalma, is the dam of Northern Dancer and his half sister Spring Adieu (by Buckpasser) Both are found in Exceed and Excel's background as his second sire Danzig is closely inbred to the mare. On his distaff side, Outstrip is inbred to Cap and Bells. The blue hen is Outstrip's fourth dam as well as being the grand-dam of Outstrip's damsire El Prado. Confusing to read, but much easier to view in the pedigree chart below. 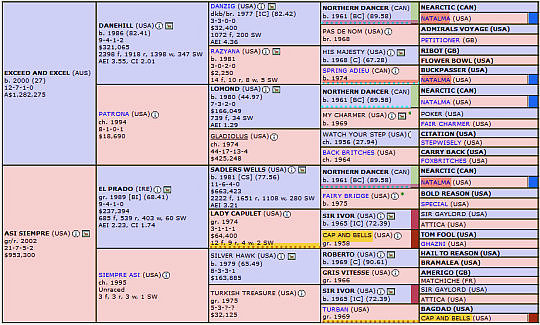 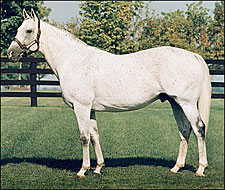 1991 Irish Champion Juvenile El Prado is Outstrip's damsire. A top 50 leading broodmare sire for the last three years, El Prado is also the damsire of the outstanding runners Believe You Can (Kentucky Oaks), Bit of Whimsy (Q.E. II Challenge Cup) and stakes record setter Hilda's Passion (Humana Distaff). El Prado is a son of the great Sadler's Wells, a mainstay of European breeding.
The Exceed and Excel/El Prado bloodline cross has produced only one runner, Outstrip. There's precedent for the cross, as Exceed and Excel has sired 21 starters, 13 winners and 3 blacktype winners from 25 Sadler's Wells mares.
Summary: 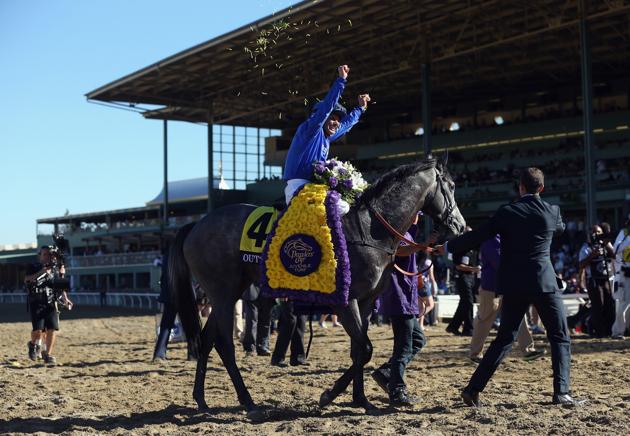 Have we seen the last of Outstrip? The careers of the previous Juvenile Turf winners have been disappointing and the Breeders' Cup was the highlight of their short careers. There's hope for Outstrip, as he's already raced five times and has proven himself to be a determined competitor. Distance wise, he'll likely be best up to 1 1/8 miles over firm turf and could become a strong miler in England and Ireland. If we're fortunate, perhaps we'll see Outstrip in a year or two in the Breeders' Cup Mile.