5 Most Famous Horse Races in the World 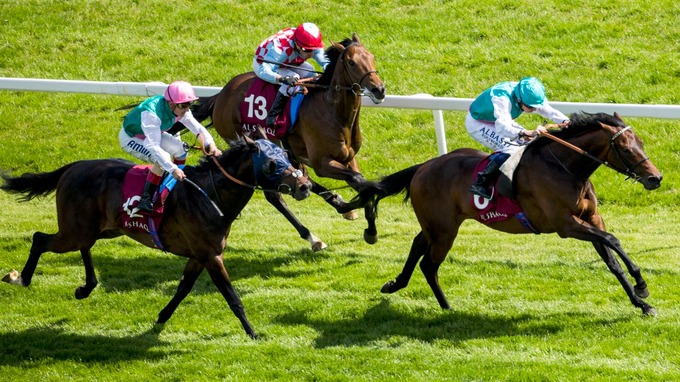 Horse racing’s beauty lies in its simplicity: horses, jockeys, a track, and a race to the finish line. It’s one of the oldest sports on the planet, developed in the ancient world, and the simple rules virtually unchanged since classical antiquity. The sport has remained incredibly popular throughout history.

We have documentation of races in the original Greek Olympic Games (we’re talking over two thousand years ago here!), in public entertainment venues in the Roman Empire, and in medieval England following the Crusades. But which are the most epic horse races in the world today? While we can’t claim to be the absolute authority, here are our nominees for the top 5 slots.

One of the oldest races of the modern era, the Epsom Derby can trace its roots to 1780 England. It’s steeped in tradition, history, and the weight of sheer prestige. It’s undoubtedly the most famous English race, with the country simply knowing it as ‘the Derby’. The prize purse is a very healthy $2 million.

The event is regularly attended by members of the Royal Family. And the race is also ridiculously popular amongst those not able to attend, with many Brits glued to their favourite live stream horse racing channel.

Run on the very first Saturday of June every year, the Derby is the middle ‘leg’ of the legendary Triple Crown (the other two being the 2000 Guineas and St Leger). The race allows 3-year old colts and fillies, with the horses racing over a mile, four furlongs, and ten yards.

We now go to the other side of the pond, with the Breeders’ Cup Classic claiming the number 4 spot on our list. Despite its relative youth (the first race was held in 1984), it’s the richest horse race you’ll find in the United States. The prize purse is over triple of what you’d get at the Epsom Derby, with $6 million in the kitty.

Contrary to the Epsom Derby, which is always held at the Epsom Downs, the Breeders’ Cup Classic changes venue. All of them have been held on US soil, except for one: in 1996, the event was held at the Woodbine Racetrack in Toronto, Canada. This year, you can catch the 2019 Breeders’ Cup at Santa Anita Park. The distance 1.25 miles, with the Grade 1 event open to horses that are 3 years old.

With the race limited to 14 starters, all of them being top notch thoroughbreds, the Breeders’ Cup Classic is incredibly difficult to predict. The biggest ‘underdog story’ comes from 1993, when Arcanguespipped the others to the post. If you had put a $2 wager on that result, you’d have received a nice $269.20 in return.

You’d be forgiven for thinking this one is held in Qatar. With the sponsor’s name emblazoned on most of the promotional material, the Prix de l'Arc de Triomphe is actually held on the Longchamp Racecourse in Paris, France. Known as the ‘Arc’, this race is the second richest turf race (The Everest takes the crown). With a prize purse of $5.5 million, it has a reasonable claim for the most prestigious European racing event.

The word ‘Dubai’ probably gives it away: this race has a staggering prize purse of $12 million. Run on the last Saturday in March of every year, the Dubai World Cup takes places on the Meydan Racecourse, Dubai, UAE. It’s the newest race on our list, with the first horses taking off just over 20 years ago in 1996.

The Dubai World Cup has recently reclaimed its crown as the richest horse race on the planet, a title it lost in 2017 to the Pegasus World Cup. In 2019, however, the American race reduced its purse by $7 million (from $16 to $9 million). The event screams money from top to bottom, which is unsurprising as it’s backed by the country’s ruling Sheikh. The race is actually part of the wider Dubai World Cup Night Event, which has an overall purse of just under $30 million.

Our credibility would have crumbled if we didn’t put the planet’s most famous horse race on the number 1 spot. The Kentucky Derby started in 1875, is the primary leg of the Triple Crown, and is held on the first Saturday of May every year.

The race is known as “The Fastest Two Minutes in Sport”, with 3-year-old thoroughbreds racing a track 10 furlongs in length (2,012m). Considering the race’s reputation, it’s no surprise that gamblers all over the world tune in and place a bet. It also draws huge crowds, with the 2017 edition welcoming 158,070 attendees. What sets this race apart is a tradition: the mint julep, the burgoo, the famous “Millionaire’s Row”, and the yearly spectacle of the marching band’s “My Old Kentucky Home” all contribute to the special atmosphere created by this race.

And that concludes our list of 5 most famous horse races in the world. We concede that the list isn’t definitive (we even had some arguments amongst ourselves!), but we’re confident most horse race aficionados would, barring a pick or two, largely agree with our picks.