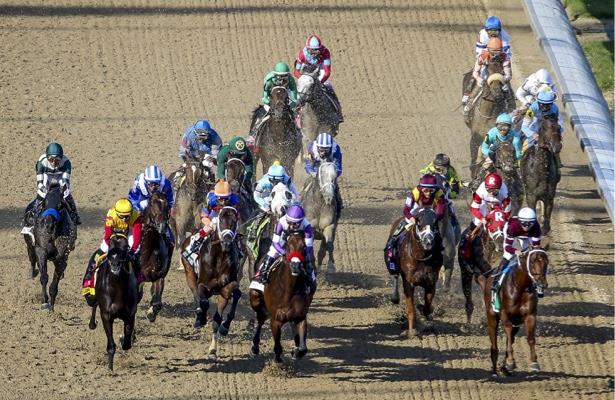 Because of the points system, the Kentucky Derby has turned into a less stressful race for speed horses. The only true pace collapse in recent years occurred in 2013 after Palace Malice exploded in the opening quarter with newly added blinkers, resulting in the late-closing Orb’s victory. The six editions afterwards resulted in speed or tactical speed winning.

This rescheduled version on Sept. 5 at Churchill Downs looks to continue the pattern of fast, but not suicidal, Derby pace scenarios. On paper, it favors horses with tactical speed that can stay within range.

[Related: Tiz the Law even money in latest future pool]

Here are the horses separated into pace categories with short recaps and comments on their previous races.

The field is subject to change in the next few weeks.

Authentic set the pace in his narrow Haskell Stakes (G1) victory over Ny Traffic at Monmouth, but one start before that he could only finish second to Honor A. P. after breaking poorly in the Santa Anita Derby (G1) and contesting the pace while running wide. He still ran well.

However, Baffert wins a good portion of his Grade 1 races by controlling the pace, and it seems probable that he will want Authentic sent early.

As of now, Shivaree is unlikely for the Derby. But if he enters, he will give Authentic needed company.

A couple other Derby possibles that own speed are the filly Swiss Skydiver, who runs in the Alabama this weekend but is more likely for the Oaks, and Shirl's Speight, who is undefeated in two starts in Canada but has shown good speed in his starts.  Shirl's Speight when straight to the lead in his debut on turf, and sat second behind the pacesetter in his most recent start.

If no one sends, Art Collector might find himself in this position.

These speed horses are capable of giving Authentic needed company.

Art Collector set the pace in the Ellis Park Derby, but he also kindly let Shivaree and Swiss Skydiver in front of him in the Blue Grass Stakes (G2). He does not act like a “true” pacesetter, if that makes sense.

Ny Traffic always finds himself chasing or pressing the leader. After chasing Wells Bayou in the Louisiana Derby (G2), he contested the pace with Celtic Striker and Pneumatic in the Matt Winn Stakes (G3) before pressing Authentic in the Haskell and losing by only a nose.

King Guillermo has been training up to the Derby this summer, but it is clear he owns good speed. He took up the pressing role right off Relentless Dancer in the Tampa Bay Derby (G2) before winning. In the second division of the Arkansas Derby (G1), he sat in the pocket before running second to Nadal.

Tiz the Law also is capable of pressing the pace if needed.

Tiz the Law pressed the pace in the Travers Stakes (G1). His preferred position is probably a few lengths off the pace though. For example, in the Belmont Stakes he sat two lengths off Tap It to Win before winning.

Honor A. P. made an early move in the Shared Belief Stakes. But he also prefers to sit a few lengths off the leaders, as he did in his Santa Anita Derby (G1) win.

Caracaro settled three lengths off the pacesetter Uncle Chuck in the Travers Stakes (G1), which means he might find himself roughly in the same area as Tiz the Law and Honor A. P.

Thousand Words’ position is more difficult to predict. While he set the pace in the Shared Belief en route to defeating Honor A. P., he also came from three lengths behind in the Los Alamitos Derby (G2).

Does Baffert decide Thousand Words is more effective utilizing speed? In that case, he might affect his other entrant Authentic.

In all likelihood, Thousand Words gives a few lengths to the leaders.

Attachment Rate flashed more speed in the Ellis Park Derby and Matt Winn Stakes (G3). But he also initially settled seven lengths behind in the Blue Grass Stakes. Four starts ago in the Unbridled Stakes at Gulfstream, Attachment Rate also closed from four lengths behind.

Attachment Rate probably will find himself in midpack.

Necker Island generally settles a few lengths or so off the pace. In a larger field, he might lose a few lengths and find himself in midpack. If handicappers want to label him a stalker, that fits too, as he was only 3 3/4 lengths off Art Collector in the early stages of the Ellis Park Derby.

Dr Post closed from four lengths back in the Belmont Stakes to pick up second. In the Haskell, he lagged in sixth at one point, six lengths behind Authentic, before closing for third. It is clear he does not own the natural speed to sit near the lead.

This category is crowded.

Max Player was six lengths off the pace in the Travers Stakes (G1) and 10 lengths off in the Belmont Stakes. He is not likely to change his strategy for the Derby. But the unexpected trainer switch from Linda Rice to Steve Asmussen is notable. Does Asmussen change tactics?

Finnick the Fierce started 11 1/2 lengths off the pace in the Blue Grass Stakes (G1) and reached fourth at one point, before fading in the stretch to seventh. He pressed the pace two starts ago in a Churchill Downs allowance race versus Art Collector only because of the short field. His natural position is settling farther behind.

Sole Volante has not been seen since the Belmont Stakes, where he closed from last and 12 1/2 lengths behind to sixth in the stretch.

Enforceable quietly picked up fourth after starting 9 1/2 lengths behind in the Blue Grass Stakes. It is hard to imagine trainer Mark Casse experimenting with any different tactics with this closing grinder.

Here are the 17 horses considered likely for the Derby at this time.