Will Preakness Stakes new shooters back up their figures? 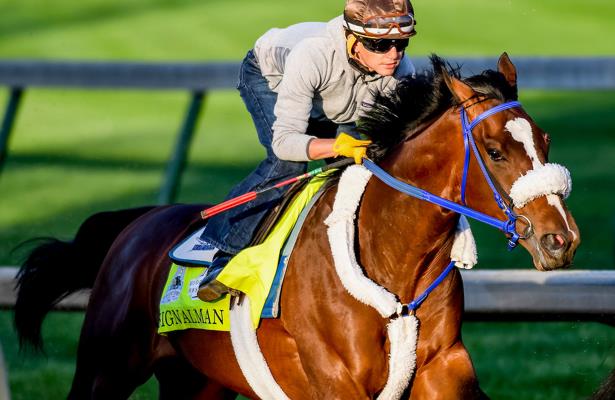 When browsing the Brisnet past performances for Saturday's Preakness Stakes contenders, it came as a surprise that the Triple Crown new shooters show higher last-race speed ratings than counterparts exiting the Kentucky Derby.

But how likely is it that each of these horses will submit the same performance at Pimlico Race Course, especially if those ratings represented a career-best figure?

Let's analyze just that, and keep in mind that even if a horse is projected to repeat or improve his last number, it may not be enough to win in this high class of a race. But, it might make him a trifecta player.

Will he repeat or improve? Likely

The popular Maryland-bred gelding earned a 99 in his 11-length Federico Tesio Stakes romp, which equaled the speed rating in his Private Terms Stakes win two starts back. Furthermore, he rated well in the Tesio, proving his versatility if his preferred spot as the pacesetter gets taken.

Criticizing the company in his last two starts is fair, but further back in his form he also defeated Gray Magician, Win Win Win and Our Braintrust.

Not even a wet track will stop him, as he shows a 10-length win in the slop from last October. For that race, he earned a career best (at the time) 87 Brisnet Speet Rating.

A bad post position may still derail Alwaysmining, but right now, he is a great candidate to repeat the 99 or improve and looks like a solid win contender.

Will he repeat or improve? Unlikely

Some holes exist in Owendale’s Lexington Stakes (G3) that registered a 99 Brisnet Speed Rating. To start off, he improved a significant 15 points off his 84 in the Risen Star Stakes (G2) back in February, and that seems like too much to repeat.

How likely is it that the Lexington featured a speed rating on par with the final Derby prep races, even though the top 3-year-olds skipped the race?

Owendale also earned a 96 on Jan. 17, but is that accurate? On that day, he beat Frolic More by a little more than a length. Frolic More has gone on to accomplish nothing since then, losing three straight.

Owendale also enjoyed a wide trip in the Lexington, which is bad on most occasions. But in this specific race, the that may have aided him, as almost every main track winner on the April 13 Keeneland card took the outside paths.

With that said, Owendale belongs to a high-percentage trainer in Brad Cox, and other handicappers thought more highly of this horse all along. He might earn a “saver” spot on my tickets.

Will he repeat or improve? Unlikely

The same comment about the Lexington Stakes speed rating applies. Is it logical the winning number was a 99 and the runner-up figure a 97?

Two starts ago, Anothertwistafate ran a game second in the Sunland Derby (G3), losing by a neck to Cutting Humor with a 98 Brisnet Speed Rating. But Cutting Humor only managed to run seventh in the Southwest Stakes (G3) one start before and 10th in the messy Kentucky Derby one start later.

Yet, Anothertwistafate nearly repeated the 98 with his 97 in the Lexington. Those numbers feel too high after using Cutting Humor as the measuring stick.

Furthermore, this Scat Daddy colt has failed to close the deal with rating tactics twice. In his three synthetic wins, he set the pace and drew off, looking much more dominant.

The pace scenario with Warrior’s Charge and Market King joining the Preakness field will give him trouble as well.

Will he repeat or improve? Likely

With the right pace and trip, Signalman always feels like a threat to close well. He disappointed in the Fountain of Youth Stakes (G2) with a flat seventh after the generous pace setup Hidden Scroll and Gladiator King gave the field, but that is forgivable off the layoff. The third in the Blue Grass Stakes (G2) was an improvement. Will the third start off the layoff result in another step forward?

One main concern from the Blue Grass is that Vekoma failed to back up the race with a 12th in the Kentucky Derby. Keep that in mind.

Regardless, Warrior’s Charge and Market King will add considerable speed to the Preakness, giving Signalman every chance to turn in his best race of the season.

Will he repeat or improve? Unsure

Back in March, he was my Rebel Stakes (G2) pick. That didn't work out so well. He did return with a good fourth in the Arkansas Derby (G1) before winning the new Oaklawn Invitational to earn a spot in the Preakness.

In the Arkansas Derby, Laughing Fox only received a 90 Brisnet Speed Rating but finished one length behind Country House, who was eventually promoted to a Kentucky Derby victory.

Laughing Fox then improved to a 96 in the Oaklawn Invitational, which he won after the pace seemingly collapsed. TimeformUS calls the pace moderate, but Brisnet marks the first call and second call with a +5 and +6.

Considering Laughing Fox only defeated Night Ops by a neck, though, it is fair to question the class of the race. Night Ops had finished eighth in the Lecomte Stakes (G3) earlier this season.

These are mixed signals for Laughing Fox. With a fast pace he might find a way to clunk into the superfecta at a longshot price. Others are more appealing, however, to jump forward into the 100 area and win the Preakness.

Will he repeat or improve?: Likely

Given every horse in the Florida Derby (G1) field was compromised by Maximum Security’s slow pace, it is safe to assume this closer will improve.

When the pace is slow, speed figures can get wonky, failing to provide a realistic picture of the horse’s ability. But they shouldn't, as that is the handicapper’s job to decide.

In any case, Bourbon War turned in some 96s before, including when he ran fourth in the slow-paced Remsen Stakes (G2) last fall as a 2-year-old.

With a proper pace, it's not difficult to envision horse getting into the mix late and turning in a number around the high 90s or 100. If he can do that, he might win, or at least fill out the trifecta at a moderate price.