Why speed is important in today's Kentucky Derby 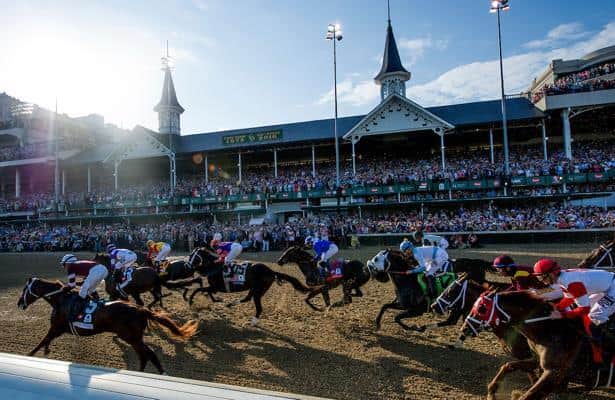 Even though closers win their fair share of races, speed always has been a natural asset in dirt racing. In terms of the Kentucky Derby, the tool proves especially useful because of the points system and huge 20-horse field.

What is the Derby points system and how does it help speed? Starting in their 2-year-old season, horses can earn points in designated points races on the Road to the Kentucky Derby. Most of those point races are traditional stakes races.

Before the point system, graded stakes earnings would determine the Derby preference list, allowing sprinters to qualify for the 1 1/4-mile race. Because the point system does not include sprint races, the current Kentucky Derby is usually void of true sprinters with speed, making early routing speed an even bigger advantage.

Since 2013, Orb has been the only deep closer to cross the wire first in the Kentucky Derby. Country House won as a closer in 2018 via disqualification, but even he made use of tactical speed to travel in ninth through the early stages, as opposed to lagging behind in Orb fashion.

Besides the points system eliminating most sprinters, speed also provides an advantage because of the sheer size of the field. Early speed allows horses to clear the pinball traffic of a 20-horse field and subsequently helps them travel in a good rhythm.

Setting the pace in the same fashion as Authentic last year works, as long as the stamina to last 10 furlongs exists in the horse's blood.

Watch how he clears the pack by the first turn.

Also note Honor A. P.’s poor position near the rear.

Even before the points system, navigating through heavy traffic as a closer and winning took luck. The odds simply are not in the favor of avoiding horses.

Most fans today remember Street Sense and Mine That Bird shooting through the rail as deep closers in 2007 and 2009 under Calvin Borel en route to victory. In both cases, they were lucky to not find a roadblock during their winning moves. When racing fans look back on Borel in 100 years, he will be known as a superb Kentucky Derby jockey.

In other years, there were horses such as Lookin At Lucky in 2010 who had to endure a nightmare trip from behind. Lookin at Lucky also had a poor break and rocky trip to the first turn.

The rail post made it impossible to secure a clear spot.

Lookin At Lucky went by a good number of horses on the far turn and stretch run, but the traffic made the run difficult. In mid-stretch, he went from tipping out to shifting in.

Using this example, it is not hard to see why trainer Bob Baffert prefers to send most of his runners to the front. The strategy eliminates any “What if?” scenarios.

Two weeks later, Lookin at Lucky won the Preakness with a cleaner trip.

Three years ago, eventual Triple Crown champion Justify took up a pressing trip next to future sprinter Promises Fulfilled, who slipped through the points system by winning the Fountain of Youth Stakes (G2). Despite the fast pace, Justify did not feel the effects and won by 2 1/2 lengths over Good Magic.

Besides Justify making use of his speed, there are troubled trips to point out in relation to the underneath spots. For example, the third-place Audible had to wait behind traffic and alter paths on the far turn. At the end, he lost second to Good Magic by only a head.

Instilled Regard became stuck behind the same wall and withheld his run until mid-stretch when finally clear.

He lost third by 1 3/4 lengths, but the amount of time he waited before moving late likely cost him a chance to pick up second or third.

Good Magic made use of his tactical speed to avoid trouble and stay close to the leaders. He then took his shot on the far turn, but Justify simply outran him and won. Good Magic’s early position led to him winning the race for second because he had less traffic.

Leading up to this year’s Kentucky Derby, comments about the pace being fast and setting up for closers are bound to dominate as they do almost every year.

But recent history shows that speed greatly benefits horses’ win chances in this race. It helps to have at least enough speed to stay closer than usual, as Country House did in 2018. The overall history shows that closing from far back in a 20-horse field requires luck and a great ride because of the traffic, especially on the far turn when the pack becomes a mess.

Think about those points when handicapping the Kentucky Derby. Sure, another pace meltdown and deep closing winner in Orb fashion will happen at some point. But, today’s version of the race favors either speed or tactical speed, at least for the top spot.