Who are the 3 most exciting older horses for second half of 2021? 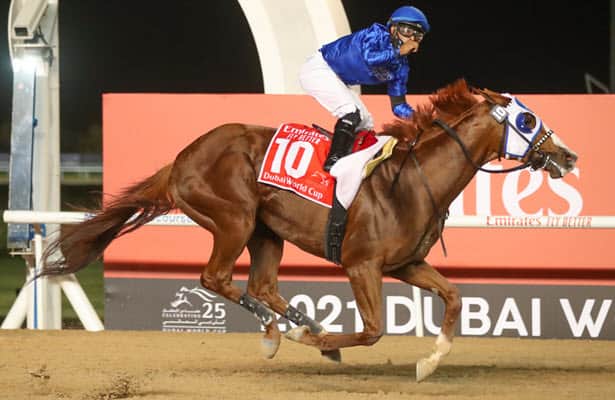 Although topics such as these are open to debate, racing fans can find at least three exciting horses in the older dirt router division. One of the three horses in this list is established, and the other two remain under the radar a bit despite battling each other in a Grade 1 race recently.

[These are the fastest 3-year-olds after the Triple Crown]

Here are short summaries of each horse and why they deserve attention, mainly from a speed-figure perspective. The latter two horses are combined into one section because of their shared races and figures.

Last year, Mystic Guide took a while to develop. After a closing third-place finish in a six-furlong sprint at Fair Grounds to start off his career, Mystic Guide broke his maiden in March by five lengths while stretching out to a two-turn route.

Two months later, Mystic Guide finished second in an allowance race at Belmont, five lengths behind the impressive winner Tap It to Win. Also notable is the closing third-place horse, Country Grammer, whom Mystic Guide outkicked in the stretch run.

As the favorite in the Saratoga edition of the Peter Pan Stakes (G3), Mystic Guide finished third by 3 1/2 lengths behind Country Grammer and Caracaro after making a belated bid. Considering Mystic Guide’s 8-5 odds, he was a slight disappointment even though he hit the board.

Following the loss, trainer Michael Stidham decided Mystic Guide needed blinkers for his next start in the Jim Dandy Stakes (G2). This time, Mystic Guide won by 3/4 of a length with a career best 117 TimeformUS Speed Figure. Regardless of the narrow margin, the blinkers seemed to help Mystic Guide propel to a new level.

In his final 2020 start, Mystic Guide closed for second by 3/4 of a length against Happy Saver in the Jockey Club Gold Cup (G1), beating the experienced Tacitus in third. For the runner-up effort, Mystic Guide earned another career high of 122 on TimeformUS.

This year, Mystic Guide began fast with a six-length win in the Razorback Handicap (G3) and yet another career high of 128 on TimeformUS, his best by six points. Mystic Guide earned a raw figure of 130, which TimeformUS most likely adjusted down for pace reasons.

His improved tactical speed with blinkers has helped.

Right now, it seems clear Mystic Guide is capable of hitting the 130 range on TimeformUS. Only good horses break that mark.

If Mystic Guide can improve one more time and stay there, he will likely continue to capture important races and might even prove himself on par with other great dirt routers in recent years, such as Accelerate, Gun Runner, Arrogate and California Chrome. The potential is there.

If Mystic Guide fails to retain his spot, two vastly improved dirt routers at Santa Anita both could develop into the best dirt routers in the country. Rather than separate them into two sections, it makes more sense to combine the two because both horses competed against each other in exciting stretch duels twice this year.

The first one to discuss is Country Grammer, who is trained by Bob Baffert. As stated above, Country Grammer ran third in a Belmont allowance race last June, behind Tap It to Win and Mystic Guide. Despite the third-place finish, he tied his high TimeformUS figure of 106.

Country Grammer exacted revenge on Mystic Guide afterward by winning the Peter Pan Stakes (G3) with another career high of 116 on TimeformUS, but then he took a small step backward with a fifth in the Travers Stakes (G1). After the Travers effort, Country Grammer went on the shelf and left Chad Brown's barn.

As for Royal Ship, he began his career in Brazil and won the Estado do Rio de Janeiro (G1) at Gavea in his seventh start to highlight his time in South America before transferring to trainer Richard Mandella in the Southern California circuit.

Royal Ship’s early races at Santa Anita and Del Mar were somewhat disappointing. He ran third in the Del Mar Mile Handicap (G2) last August, before a sixth in the City of Hope Mile Stakes (G2) and a troubled last in the Native Diver Stakes (G3) while switching to dirt. In the Native Diver, Royal Ship stumbled at the start.

This year, Country Grammer and Royal Ship took the next step forward.

After setting the pace in the Californian Stakes (G2), Country Grammer settled for a strong second after Royal Ship outbattled him in the stretch to win by a neck. Both Country Grammer and Royal Ship received a 131 on TimeformUS for their outstanding efforts.

In their next battle in the Hollywood Gold Cup (G1), Country Grammer appeared beaten with Royal Ship poised for yet another win.

Somehow, Country Grammer dug down deep and won by a head late.

Country Grammer’s speed figure fell below 130 to a 128 TimeformUS Speed Figure for winning the Hollywood Gold Cup, while Royal Ship shows a higher 129 for his runner-up effort. The fact that both horses missed 130 in this spot by one or two points is not a huge deal.

Note the gap between Royal Ship and Express Train in third. Express Train had just finished a close third in the Oaklawn Handicap (G2) and a close second in the Santa Anita Handicap (G1), yet he could not get within four lengths of Country Grammer and Royal Ship in the lane.

Both Country Grammer and Royal Ship remain exciting players among older dirt routers, and either could develop into the No. 1 horse by the end of the season.