Which sires were good (or bad) bets in Derby Sire Future Wager? 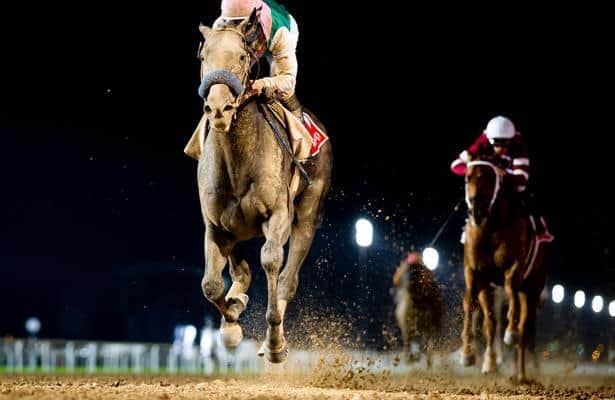 Last week, Churchill Downs offered the only opportunity to wager on the winning 2023 Derby sire through the Kentucky Derby Sire Future Wager pool, which closed on Sunday with interesting results. As with any other race, the pool ended with notable underlaid and overlaid sire options.

Surprisingly, the underlaid sire is arguably the popular Gun Runner, while Good Magic ended up as a good mild value option and City of Light has a shot at gigantic odds to end up as the sire of the Derby winner.

Here are the reasons for why each sire can win.

Unlike last year, Gun Runner lacks any major stars in the 2-year-old male crop at this point. Perhaps the big Gun Runner star on the current Derby trail has yet to start, because the ones out there seem average.

His best hope on the trail is currently Red Route One, who ran a troubled fourth in the Kentucky Jockey Club (G2) at Churchill Downs last weekend. Earlier in the year, Red Route One also closed for third in the Breeders’ Futurity (G1) at Keeneland. His only miscue came in the Street Sense Stakes over slop, when he likely did not handle the track.

A few months ago, it looked like the Saratoga maiden winner Echo Again might emerge as the next Gun Runner star, but he fizzled out while stretching to a two-turn route in the Iroquois Stakes (G3) with a disappointing seventh-place finish after briefly taking the lead.

Yet, Gun Runner ended up 12-1 in the sire wager. Bettors likely remembered his explosive crop from last year and bet him based on those merits.

Good Magic has at least one winner on the Derby trail already with Blazing Sevens, who took the Champagne Stakes (G1) over slop at Belmont.

After the Champagne, Blazing Sevens closed for a decent fourth in the Breeders’ Cup Juvenile. Notice that Blazing Sevens finished 6 3/4 lengths in front of Curly Jack, who turned in a good runner-up finish in the Kentucky Jockey Club (G2) last weekend after encountering traffic.

Blazing Sevens gives the impression of a colt who can last on the trail and make the Kentucky Derby with a few more good finishes.

Speaking of Curly Jack, he is also a son of Good Magic.

If nothing else, his win in the Iroquois Stakes (G3) in September and runner-up finish in Kentucky Jockey Club (G2) last weekend put him in good standing on the Derby points list and proves he likes Churchill.

On the down side, Curly Jack’s fifth-place finish in the Breeders’ Cup Juvenile shows he needs to step up his game to a higher level next year. Regardless, Curly Jack gives Good Magic a second horse who is in the Derby trail mix. Sire bettors can always use another runner.

Even if Blazing Sevens and Curly Jack end up as the only two Good Magic stars in this crop, they should at least give Good Magic bettors two chances as long as they remain healthy on the trail.

At Palm Meadows in Florida, there is an expensive $250k City of Light colt named Lights of Broadway working toward a return after breaking his maiden at Gulfstream and winning the Armed Forces Stakes in September.

Perhaps Lights of Broadway could make noise for the familiar team of trainer Mark Casse and owner John Oxley with a step forward. Forget about his speed figures. This colt is still developing.

Also pay attention to the maiden Expect More. This son of City of Light closed well for third after blowing the break in the fast maiden race won by the Baffert-trained Arabian Knight on the Breeders’ Cup undercard.

Picking out a long shot in the sire pool requires doing extra work, such as finding horses who had troubled trips. Expect More is still a maiden, but there is talent and the team behind him knows how to make big races.

With trainer Todd Pletcher behind Expect More, as well as familiar owners in Repole Stable and St. Elias Stable, Derby watchers can “expect more” from this colt. He just needs to break better next time.