Secretariat Stakes favorite Analyze It has an edge on Euros 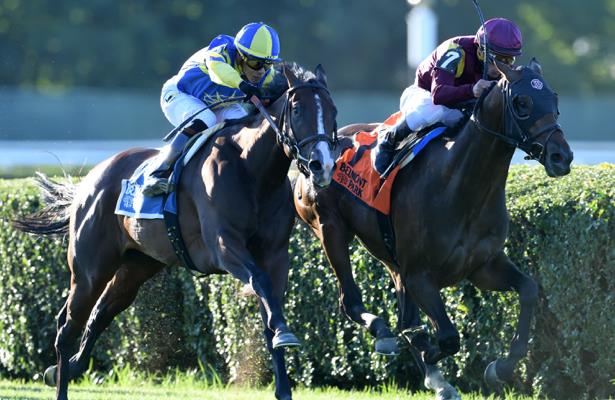 Despite losing his last two starts, Analyze It enters the Grade 1, $400,000 Secretariat Stakes on Saturday at Arlington Park as a deserving favorite and budding star. He just shows so much talent on paper that unless one of the Europeans steps up, he will be tough to beat once again.

Therefore, I'm going to examine Analyze it first, and then the Euros, followed by some thoughts on the other Americans runners in the 1 1/4-mile turf feature for the 3-year-olds.

Trained by Chad Brown, the son of Point of Entry currently owns three wins and two seconds in five starts, with both of his losses coming at nine furlongs or longer. The habit of not getting the job done in longer routes is a concern.

But, Analyze It lost to the talented Catholic Boy twice in those two Belmont races and still ran well both times. The effort in the Belmont Derby Invitational (G1) was good.

Even though Analyze It broke well and held the lead early for a few moments, he conserved his energy by allowing Catholic Boy to cross over on the first turn and set the pace. Analyze It settled a length or two behind.

Meanwhile, Hunting Horn finished a good third while running on the wrong lead.

One can make the argument Analyze It is not a 10-furlong horse. Horses who display brilliance at shorter distances and stall in the lane running longer usually want to cut back. However, there are some good signs to note from his race.

Analyze It still held about a length margin on Hunting Horn at the wire, and four lengths separated Hunting Horn and the fourth-place finisher Channel Cat. Those are signs Analyze It ran fast, as turf races end up as clustered finishes more often than not.

It seems true Analyze It does not enjoy the 1 1/4-mile distance, but the Belmont Derby showed he can run this far, and there are no horses like Catholic Boy in the Secretariat.

Also helping him is the fact that the Europeans entered in this race appear a cut below at first glance. With a stronger pace, maybe Hunting Horn can turn the tables on Analyze It. Although he moved a bit too late, he kept pace with the Belmont Derby top two.

But perhaps Hunting Horn gave his top effort and is not fast enough. There are four group stakes attempts in his record, and he only managed to win one of them, the Group 3 Hampton Stakes at Royal Ascot.

Out of the new invaders, Bandua (who sports an American pedigree) appears most interesting. First of all, toss his most recent race at 14 furlongs. It was too far.

The effort in the Dubai Duty Free Irish Derby (G1) deserves another look.

Bandua started toward the rear and stayed there, finishing a disappointing eighth.

But the Irish Derby was strange all around, with the 25-1 longshot Rostropovich leading almost the entire way. Latrobe, also a bit of a price, followed him in second in the initial stages, and then successfully battled Rostropovich in the stretch.

Heavy favorite Saxon Warrior, who followed along in third, ranged up on the outside of those two and failed to close fast enough in the stretch run.

Odd pace situations are more difficult to detect for someone who does not study European racing often, especially without pace figures. But this race probably favored speed types, making it difficult for a horse like Bandua to close from behind.

Furthermore, Bandua’s connections thought highly enough of their horse to place him in a Group 1 race. Some of the other Euros lack the Group or Grade 1 experience.

For instance, Aidan O’Brien’s Lucius Tiberius is on a two-race win streak, but in eight career starts he has never once attempted group stakes company.

Ming has tried the Gallinule Stakes (G3) at The Curragh. Yet, he finished sixth in that race, and his other three races are wins against lesser company.

On a positive note, the runner-up was the aforementioned Latrobe.

The Gallinule Stakes winner Platinum Warrior is entered in the Secretariat, too, and he has competed in two Group 3 races and one Group 1 (the same Irish Derby discussed above) in his last three starts, which is also a good sign the connections believe in him.

As for the Americans, none of them hold a chance against Analyze It. On paper, some of them would even be questionable to win an ungraded stakes.

For instance, what is Carrick doing in the Secretariat? He won a maiden claimer at Belmont to start off his career, and followed that up with a starter allowance victory. Then, he finished an uninspiring third in the Kent Stakes (G3) at Delaware.

Granted, the Kent featured the Breeders’ Cup Juvenile Turf and American Turf (G2) runner-up Untamed Domain, and Carrick finished in front of him. Untamed Domain, who is entered here as well, ran into a world of trouble though as he checked twice.

Untamed Domain may not offer the right value as a well-known horse.

If a longshot American must be used, one interesting entry is Sniper Kitten, who holds a three-race win streak coming into this race for Michael Maker. In his last two starts, he took the Mystic Lake Derby at Canterbury Park and a Keeneland allowance.

Ken and Sarah Ramsey own Sniper Kitten, and it just seems like whenever they enter a good horse sired by Kitten’s Joy, that horse must be respected, at least underneath.

Is Analyze It a single against this field of suspect Euros and overmatched Americans? He certainly holds a significant edge.

Hunting Horn and Bandua are interesting enough to use alongside, just in case something strange happens, while Sniper Kitten is a fun value horse. In all likelihood, Analyze It will enjoy Catholic Boy’s absence and win.