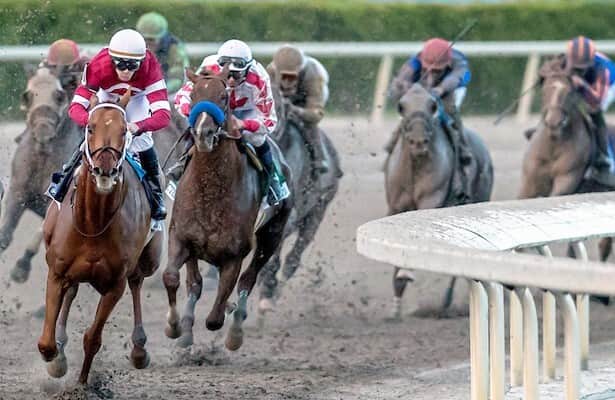 Final post positions might play a significant role in the Grade 1, $3 million Pegasus World Cup Invitational at Gulfstream on Jan. 28.

If a horse draws wide, his success depends on whether he owns the speed to clear the horses to his left side and make his way to the front end by the turn. But that speed horse also needs the ability to endure such a task and not fade in the stretch.

In two-turn Gulfstream dirt races, dedicated mid-pack and deep closers in post 8 or higher tend to get caught wide because they lack the early foot. Those outside-drawn horses need to hustle those first 150 yards plus the run-up to the first turn.

For example, think back to when Gun Runner drew post 10 in the 2018 Pegasus World Cup. Given the poor post draw, there was an argument to play against him by hoping he would break poorly and run wide early.

When the gates opened though, jockey Florent Geroux hustled Gun Runner to use his speed, and he responded well by first clearing the horses to his immediate inside. Once Gun Runner moved ahead of Toast of New York and War Story, he then traveled diagonally toward the inside area of the track and barely cleared Sharp Azteca to his left in order to avoid getting caught wide.

Gun Runner did not clear every horse. Collected ended up setting the pace with Gun Runner pressing him close in the two path. Regardless, Gun Runner’s aggressive tactics allowed him to avoid a wide turn.

Collected led the field for the first two quarters before Gun Runner took over on the far turn and maintained his lead for a 2 1/2-length win over West Coast, who saved ground all the way from post 2 and still failed.

Who did the wide post positions negatively affect in the 2018 Pegasus?

Watch Seeking the Soul from post 11. As a mid-pack closer, he had no chance to clear the inside and initially ran six or seven wide around the first turn before coming into the four path outside Fear the Cowboy.

Seeking the Soul made up some ground in the stretch to finish fifth. But the damage had been done on the first turn, where he lost significant ground and fell way behind in terms of his initial position.

Besides Seeking the Soul, Giant Expectations lost the race already by drawing the dreaded post 12. In his last start before the Pegasus, Giant Expectations took the San Antonio Stakes (G2) at Santa Anita in pacesetting fashion after securing an uncontested lead. From post 12, he had almost no chance to out-foot Gun Runner early.

Giant Expectations faded to ninth in the stretch and lost by 18 lengths.

What about next weekend?

Art Collector owns speed to clear. But off his poor effort in the Lukas Classic (G2), where he faded to fifth, it seems he needs a better post position to factor in the Pegasus. Otherwise, bettors are taking a horse who drew poorly coming off the disappointing effort.

Simplification and Stilleto Boy tend to hit the board without winning. Those two runners need to draw better as well, even if they own speed.

Off the also-eligible list, Pioneer of Medina also could clear the inside if needed. But his ability to last under Grade 1 pressure also is in question.

Hypothetically, what if Proxy or Skippylongstocking draws post 10 or higher? Both closers are capable of running at a high level. In that case, bettors need to demand big value before accepting either of those two mid-pack closers from post positions that wide. Either of them is capable of winning with a good post, but each lacks the speed to clear.

The Pegasus World Cup draw scheduled for Sunday makes a difference, especially this year, when the list of invites seems evenly matched. If a horse draws wide, handicappers need to weight the cost of that post along with the value from the morning line. In most cases, only good speed horses will overcome the wide post positions in two-turn Gulfstream dirt route races.