Preakness 2021: 3 long shots that could hit the board 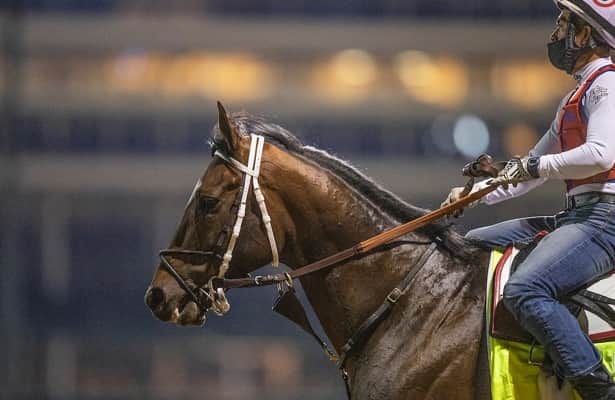 Even though anything can happen in horse racing, the chances of a long shot winning the Preakness Stakes on Saturday at Pimlico look slim because of the Baffert-controlled pace scenario. Regardless, there are a few long shots who could finish well and make the vertical wagers more interesting in the bottom slots by picking off tired horses late.

Below are the three Preakness long shots most capable of hitting the board. Consider these horses for the bottom slots of trifecta and superfecta tickets.

In the Kentucky Derby, Keepmeinmind was 19 lengths behind in last before making a respectable run in the stretch to finish seventh and 8 1/2 lengths behind winner Medina Spirit.

Despite the off-the-board Derby finish, this closer showed life for the first time this season. In his two previous 2021 runs, he finished a flat sixth in the Rebel Stakes (G2) and fifth in the Blue Grass Stakes (G2), losing by 16 lengths in the latter.

Although Keepmeinmind lost by 8 1/2 lengths in the Kentucky Derby, the race was a different breed with 19 horses and chaos for most runners except for the speed types up front. Therefore, closing for seventh in that kind of field does mean he ran better than in his prep races.

For his Derby effort, Keepmeinmind also posted a 109 TimeformUS Speed Figure. Against this Preakness field, that is within range of hitting the board, especially if he can improve a little.

Many deep closers who finish well in Louisville do not perform well in the other two Triple Crown races. Yet, this Laoban colt is possibly rounding into form in his fourth start of the year. Remember, he lost training time because of the snowstorms earlier in the spring and most likely went into the Rebel at Oaklawn unprepared.

While Keepmeinmind is not a great win bet, he can pick up a piece.

After considering Rombauer for a top slot in tickets, this is probably not the right pace situation to play him as a win contender. As a closer, he needs the right setup, and Baffert controls the pace.

Rombauer can hit the board, though, based on his most recent speed figure.

Last fall, this colt displayed early talent by closing for second in the American Pharoah Stakes (G1) and running fifth in the Breeders’ Cup Juvenile. Upon return in February, Rombauer captured the El Camino Real Derby at Golden Gate Field over synthetic with a nice pace setup.

Rombauer tried to use close stalking tactics in the Blue Grass by traveling only one or two lengths behind the pacesetter Highly Motivated and Essential Quality before fading. Perhaps this is a better horse when allowed to fall back and make a closing move after a fast early pace.

Regardless, Rombauer still earned a competitive 111 TimeformUS Speed Figure in the Blue Grass. Given the weak nature of this Preakness lineup, that figure alone makes Rombauer a live horse for all the bottom slots.

If nothing else, the 114 TimeformUS Speed Figure that Unbridled Honor earned for a closing second in the Lexington Stakes (G2) merits him respect. He lost to King Fury by 2 3/4 lengths over the slop at Keeneland after receiving a nice setup.

Because Unbridled Honor earned his number over the slop with a fast pace, there are concerns that he needs the perfect scenario to factor. Two starts ago, he was only fourth in the Tampa Bay Derby (G2), seven lengths behind Helium.

On the other hand, he might simply be taking a while to develop.

Luis Saez takes the call on Unbridled Honor for trainer Todd Pletcher. Saez is one of the top jockeys today who typically does well with speed horses. Maybe he can position Unbridled Honor a little closer in mid-pack rather than attempt to make another closing bid from the clouds.

Unbridled Honor still needs luck from an unlikely pace duel between Medina Spirit, Concert Tour and Midnight Bourbon, but anything can happen in racing. It is within the realm of possibility that Midnight Bourbon shows more speed than expected or that a hopeless runner such as Ram is sent from the inside in a “Hail Mary” attempt.

As suggested, Unbridled Honor is probably not a win candidate. But this is another closer who can pass tired horses late and light up the board underneath.