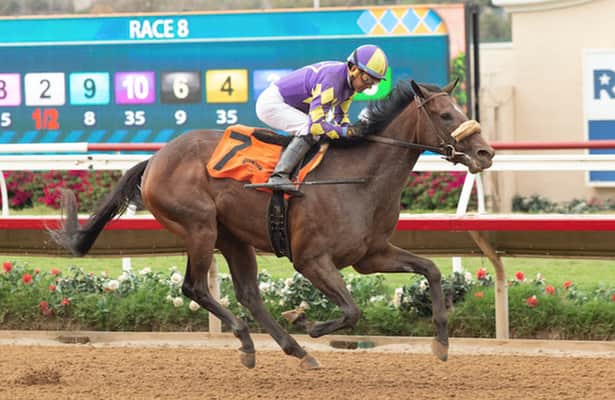 Last year, Gun Runner became the hot new sire quickly when his progeny broke their maidens early and won many of the 2-year-old stakes races.

One year later, the number of successful new sires has been a longer one, although none of the names stand out in the same way as Gun Runner did in 2021. According to Blood-Horse, the list of leading 2-year-old sires in terms of earnings this year includes new sires Bolt d’Oro, Army Mule, Justify, Good Magic and Sharp Azteca in the top 10.

Justify arguably has been the most successful new sire, with graded-stakes winners on multiple continents and 15 wins out of only 42 starters. His progeny show earnings of $1,201,440 from those 15 wins, which currently places him fourth in the Blood-Horse top 10 list.

Instead of only listing the graded-stakes winners, here are three Justify-sired maiden winners who might develop into something greater soon.

Justique broke her maiden on July 31 at Del Mar by 2 1/2 lengths at five-and-a-half furlongs to start her career on a winning note.

She received a pace setup when Home Cooking and Fourth Street contested the pace. Home Cooking had nothing left as she faded to third. Regardless, Justique came home in a strong and professional manner after a long, sustained run from behind to give a nice visual impression.

For the win, Justique earned a 72 Beyer Speed Figure and 89 on TimeformUS. If those figures seem low, 2-year-olds in July are slow.

The exciting part is that trainer John Shirreffs typically does not train his horses to win at first asking. Shirreffs runners need time. Yet, she won.

With five regular workouts since Aug. 27, Justique is nearing a return. If she can run that well in her debut under Shirreffs, the sky is the limit.

Her dam Grazie Mille also produced Mo Town, the 2016 Remsen Stakes (G2) winner and 2017 Hollywood Derby (G1) winner. With that kind of stamina-oriented sibling in his family, Justique should improve on the stretchout while using her speed effectively to avoid early traffic.

After setting the pace under pressure in a Sept. 3 maiden race at Saratoga, Champions Dream shook free by 1 1/2 lengths at the half-mile and widened his lead to 4 1/4 lengths before winning by 2 1/2 lengths.

Champions Dream earned a 74 Beyer Speed Figure and 101 TimeformUS Speed Figure. Because of the fast pace, TimeformUS likely adjusted the figure upward from the raw 95. Although Champions Dream posted mediocre numbers for a maiden race in September, he could improve, given a pedigree that hints towards route races.

Look for Champions Dream to succeed in races past one mile, on dirt or turf. With Danny Gargan training, bettors might receive value as well.

In a six-furlong Aug. 27 Saratoga maiden race, Verifying set the pace while under initial pressure from two rivals. He shook off one of them after the opening quarter and then shook off the other one late to win by 1 3/4 lengths. For a first-time starter, he gave an impressive effort.

Verifying earned a 96 TimeformUS Speed Figure for the win. TimeformUS likely adjusted the figure down from a raw 101 because of a slow pace. The pace can become contested and slow, although it is less common to see those two contrasting descriptions together. Nevertheless, the 96 on TimeformUS works as a fine starting point.

This is a half-brother to Midnight Bisou, who earned an amazing $7.5 million in mostly route stakes races. With the half-sister in mind, Verifying should enjoy the stretchout to middle-route distances at least.

Trainer Brad Cox has a nice colt on his hands. Like Champions Dream, expect Verifying to use her early speed to success as she stretches out.