In which 2-year-old races do Asmussen and Pletcher excel? 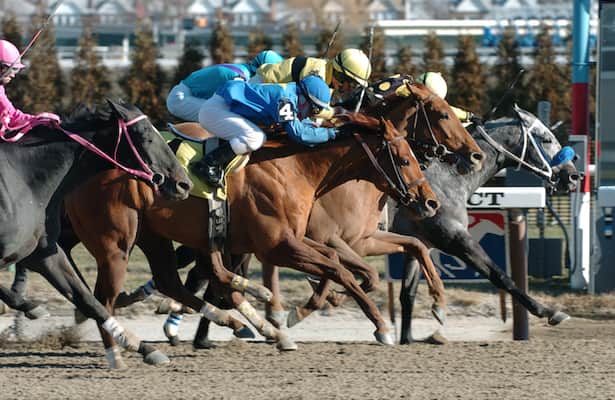 Most horseplayers regard trainer Steve Asmussen and Todd Pletcher as superb trainers with developing 2-year-olds. This year alone, Asmussen has won 43 times in 2-year-old races, and Pletcher's record shows 35 wins.

These two men can know how to get winners from young horses, but there are some differences.

At least once difference is in the type of 2-year-old winners Asmussen and Pletcher excel in. Asmussen wins often with 2-year-old sprinters, while Pletcher hits at a high rate with routers and sometimes at a generous price. In fact, Asmussen shows 39 winners in 2-year-old sprint races at any level or surface, which means those wins make up 90.6 percent of his 2-year-old wins.

On the other hand, Pletcher has won 21 times in 2-year-old sprint races, giving him a 60 percent win percentage in the same category. This means 14, or 40 percent, of his 2-year-old wins came in route races. Considering 2-year-old route races do not start popping up regularly until later in the summer, this is an impressive statistic. Pletcher knows how to stretch out young horses once the routes start.

Asmussen’s four winners in 2-year-old route races show average win odds of 3.87-1. In other words, even if bettors can find a live Asmussen 2-year-old in a route, they will probably not get paid very well for their opinion.

Finding a long shot out of Asmussen's overall winners on the 2-year-old side is more difficult. Asmussen did connect with a 19-1 shot named Jokes On Blue at Ellis Park on Aug. 26, which gives him one double-digit odds win out of the list of 43 winners in 2-year-old races.

Pletcher has been labeled as a win-early trainer for quite some time now, and he deserves the label, especially with his baby runners at Saratoga. But watch some of the Pletcher 2-year-olds with notable route pedigrees who fail in the early summer months. Those runners might pop up at a price a few months later, after they are more developed.

As with all trends, do not get stuck on them. Asmussen might excel with 2-year-old sprinters, but the former trainer of Curlin and Rachel Alexandra obviously knows how to win route races as well. Last year, Epicenter's road to the Kentucky Derby started when he won the two-turn Gun Runner Stakes in impressive fashion last December. The next year, Epicenter peaked when he won the Travers Stakes (G1).

Statistics can only hint at the right direction to go in. Ultimately, horse players need to think for themselves and adjust when the situation calls for it.

With that said, give Pletcher 2-year-olds a closer look in route races, and respect most Asmussen 2-year-olds in sprint races. Both trainers win often with young horses, but the type of races they thrive in differs.