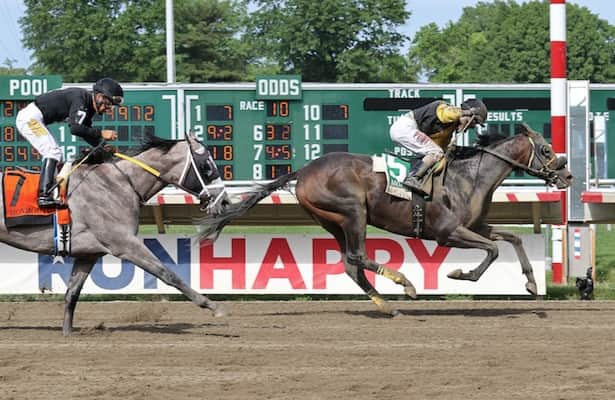 As most racing followers know, jockeys cannot use the crop to encourage their horse at Monmouth Park. If the crop is ever used, it must be for safety reasons.

Regardless of how one feels about New Jersey’s rules, it seems likely that the crop ban will affect the results of some races. Watching the replay of the Salvator Mile (G3) won by the long shot Informative, the ban likely cost Ny Traffic the victory.

From a trip standpoint, there was no reason for Ny Traffic to lose.

In the first half of the race, Ny Traffic took up his usual pressing position right next to Green Light Go, who led the field through mild fractions of 23.98 and 47.27. West Will Power, Basin and Pirate’s Punch were nearby through the moderate pace.

At the half-mile point, most Ny Traffic bettors were feeling good about their position.

On the far turn, Ny Traffic takes over the lead as expected, but he does not open up. In fact, Ny Traffic is almost surrounded by horses at the top of the stretch.

Informative made up ground on the turn and found himself in mid-pack as the field turned for home. When Ny Traffic started to drift toward West Will Power, jockey Jose Ferrer on Informative went for the huge opening inside of Ny Traffic. Informative then hit the front and held off Ny Traffic as Paco Lopez straightened out the favorite.

If Lopez could have given some right-handed strikes with the crop, it is probable that Ny Traffic would have kept a straight line and gained two or three lengths. Informative won by one length in the end, which is not a definitive margin on dirt.

To point out a note from Ny Traffic’s May 2 return race at Belmont, Irad Ortiz Jr. used the crop on Ny Traffic a few times in mid-stretch before putting it away. Some horses need that kind of reminder to keep them focused on finishing the race while leading, otherwise they get bored.

Of course, some credit does belong to Informative, who made a step forward in a May 17 Pimlico optional claiming race by finishing a good second. The Pimlico effort looked better than his starts at Parx Racing and Laurel leading into that race. From January through April, Informative lost by double-digit lengths three times and hit the trifecta only once.

In this race, Informative did become lucky with a wide opening at the top of the stretch. However, he still needed to run to snatch the lead from a wandering Ny Traffic.

Yet, it is hard to imagine Ny Traffic losing to Informative in a race with normal crop usage to help correct Ny Traffic's loss of concentration. He needed only one more length.

But this post is not a pro or anti-crop argument. It only highlights that the new crop rules could affect the outcomes of races that appear logical on paper. Without the crop usage, a 2-for-24 long-shot ran down an accomplished runner in Ny Traffic, who also had a good return win.

On the downside, races become more difficult to handicap because it is unclear which horses need the crop and which ones do not. Not every horse reacts the same, and some horses might even improve without the crop. It is hard to tell.

In any case, Ny Traffic needs to get away from Monmouth Park. It seems clear he needs more encouragement besides vigorous rein shaking to fire his best effort.

Informative has improved in recent times. In most cases, though, it is not a great idea for bettors to “chase” a big long-shot winner after he breaks through with a win. As stated above, before the Salvator Mile, Informative had only two wins in 24 starts. He needs to repeat this performance in another stakes race before trusting him on top on a regular basis.

Galerio tried hard in his third-place finish. After tipping out at the top of the stretch, he had every chance to at least pass Ny Traffic for second but rallied too slow. He is a consistent gelding with 22 top 3 finishes in 25 starts now, although this Grade 3 level is probably his ceiling.

In sixth, Pirate’s Punch turned in a flat effort as the 7-1 third choice. For what it is worth, he did run four wide on the first turn, which is not easy to overcome.

With the crop ban in place, Monmouth is a unique track for bettors. It cost Ny Traffic the win and most likely will cost more horses the win moving forward. Some bettors might like the new rules and adjust, while others will hate the crop ban and move on to other racetracks.