What we learned: Vexatious now a legitimate Distaff contender 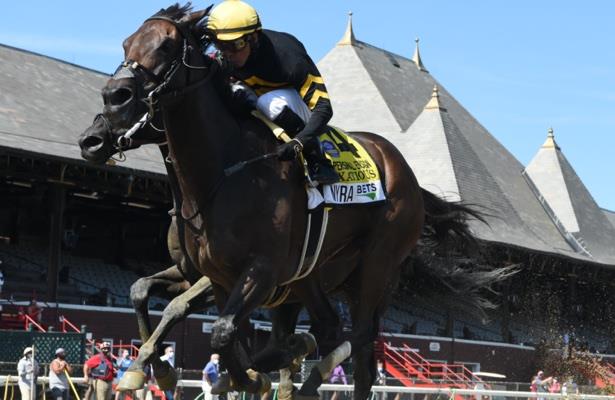 Not too long ago, Vexatious’ career stalled into mediocrity. She won only two races in 2018, one of them a listed stakes race and the other a Grade 3 via disqualification. But in the last few months, she has turned around. Exiting the Personal Ensign Stakes (G1) at Saratoga, it is clear Vexatious has more to offer after upsetting Midnight Bisou.

With this win and prior runner-up to Monomoy Girl in the Ruffian Stakes (G2), Vexatious now stands as a legitimate Breeders’ Cup Distaff threat.

To capture the Personal Ensign, Vexatious needed only to take advantage of her speed. Motion Emotion secured the lead early, and Vexatious wisely sat on her flank under jockey Jose Lezcano.

Midnight Bisou settled into the stalking position in fourth, while the public second choice Point of Honor traveled in last, only four lengths off the pacesetter.

On the far turn, Vexatious moved forward and Motion Emotion faded. But Vexatious needed to face a world-class talent in Midnight Bisou, who surprisingly only inched closer under encouragement. Point of Honor tried to rally too, but a two-horse race in the stretch run seemed clear.

At the top of the stretch, Vexatious still held a slight advantage and Midnight Bisou began to hang slightly. Earlier in her career, Midnight Bisou was suspect at nine furlongs, and the same problem crept up.

Midnight Bisou inched closer by mid-stretch. But Vexatious faced the challenge and prevented Midnight Bisou from passing her late.

Vexatious prevailed by a neck. She earned a career-high 125 TimeformUS Speed Figure for the victory, while Midnight Bisou tied Vexatious with a 125 after failing to get the job done in the stretch.

Point of Honor finished 6 1/2 lengths back in third.

Yes, Vexatious benefited from the slow pace. She only needed to put away an outclassed Motion Emotion on the front before Midnight Bisou.

But most lower-class horses fold under the pressure of a Grade 1-level horse breathing down his or her neck. The fractions do not always matter in these cases. For example, Mr. Buff set an even slower pace in the Whitney Stakes (G1) later in the card, but he threw in the towel.

Look at what happened once Midnight Bisou came within range on the far turn. As if both horses are on the same level, Vexatious handled Midnight Bisou's oncoming threat and finished off the task for the win.

Vexatious does not necessarily need Saratoga for her best shot. Remember, she ran a good fourth in the 2017 Kentucky Oaks at Churchill Downs while closing into a fast pace. In addition to the Kentucky Oaks, she also owns third-place finishes in the 2017 Fair Grounds Oaks (G2) and Fantasy Stakes (G3) at Oaklawn.

As for Midnight Bisou, she ran well and lost to a sharp mare. Her weak point is nine furlongs, though, with a 3-for-8 record. Granted, Midnight Bisou hit the board every time in those races. But she seems to overcome the distance with talent rather than a desire to run this far.

A couple of people commented about Midnight Bisou needing Mike Smith, but why? What would Smith possibly do differently than Santana? If anything, Smith might make a premature move on the backside.

Vexatious only needs to stay healthy and she will head into the Breeders’ Cup Distaff as a legitimate contender.

Midnight Bisou remains a major contender, but she is not invincible.

One quarter into the Whitney Stakes (G1), and the race was over.

Mr. Buff crossed over from Post 4 to secure the lead as expected, as Improbable switched outside of Mr. Buff to follow only a length behind.

By My Standards traveled right on the outside of Improbable in third.

Code of Honor settled into fourth, 3 1/2 lengths behind Mr. Buff.

Even-money favorite Tom’s d’Etat stumbled out of the gate, forcing him into last in the initial stages and almost eliminating all chance.

After Mr. Buff led the small field through an opening quarter in 25.12 and Improbable inched closer in second, the outcome was inevitable.

Mr. Buff lacked the class to win, making him easy to cross out.

Improbable pressed Mr. Buff through the slow pace. As Mr. Buff crossed the half-mile in a sluggish 49.74, it felt like Improbable was “leading,” giving Improbable all of the pace advantage over the foes behind him.

As pointed out in the earlier analysis, By My Standards felt a tick below Tom’s d’Etat and Improbable. He did not feel like a threat in third.

Both Code of Honor and Tom’s d’Etat were too disadvantaged by the pace. They needed By My Standards’ early position to hold a chance.

On the turn, Improbable moved into the lead past Mr. Buff and responded under left-handed urging by Irad Ortiz Jr. He opened up on the field in mid-stretch and finished the race off in style to win by two.

By My Standards stalled in the lane, but managed to hold second.

Tom’s d’Etat rallied wide past Code of Honor to pick up third in an effort that seemed better visually than on paper. He only lost by 2 1/2 lengths.

Code of Honor disappointed almost everyone by failing to pick up ground or give Tom’s d’Etat a challenge for third. He finished fourth.

Perhaps this is Improbable’s year.

Earlier in the season, Improbable lost only to Tom’s d’Etat by a small margin in the Oaklawn Mile after enduring a fast pace while moving wide on the turn. Then he won the Hollywood Gold Cup (G1) at home.

By now, it is hard not to call Improbable a top Breeders’ Cup Classic contender.

With that said, Tom’s d’Etat deserves another chance from bettors after the start and slow pace. Maybe his value will even improve next time.