What we learned: Two excuses for Hot Rod Charlie's loss 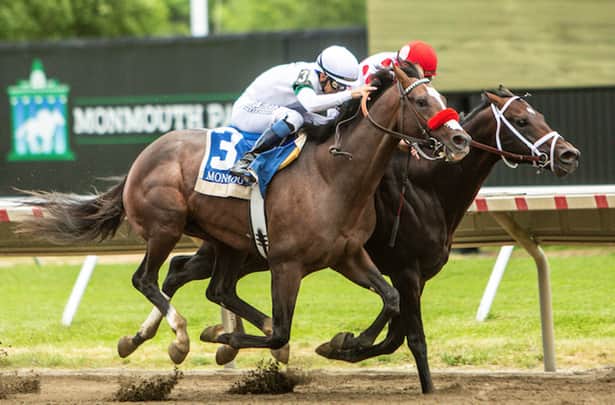 Hot Rod Charlie lost the Salvator Mile (G3) by a head to Mind Control at Monmouth Park. But the narrow loss in his return to North America is no reason to lose faith in Hot Rod Charlie, especially when considering Mind Control had past credentials as a multiple graded-stakes winner.

There are also legitimate excuses to give Hot Rod Charlie. One of the excuses described below is a fairly standard one for a Dubai World Cup (G1) runner, while the other excuse relates to the conservative ride he received.

For one, some horses returning from racing in the Middle East need at least one start to get back into the flow of racing on this soil. Whether the runner in question competes in the Saudi Cup or Dubai World Cup, or both, the desert life can prove taxing on horses not based there.

In other words, Hot Rod Charlie likely did not feel 100 percent in his first start back from Dubai after an excellent second in the Dubai World Cup.

The first start back after Dubai excuse is standard, although this rule does not apply to all horses. Each horse that makes the trip is unique. Some of them find their best form right away upon return to this soil.

As for the main reason Hot Rod Charlie lost, for some reason, Mike Smith chose not to use the crop on Hot Rod Charlie, while Mind Control had the benefit of John Velazquez making better use of the crop in the stretch. In fact, the first replay view in the video does not make it clear whether Smith had a crop.

Upon watching the head-on view later in the video above, it is clear that Smith does carry the crop and uses it in a minor way to correct course when Hot Rod Charlie tries to come in toward Mind Control.

Hot Rod Charlie took the lead in mid-stretch under mostly a hand ride in the stretch, but Mind Control fought back on the rail with Velazquez using the crop more urgently. Velazquez struck Mind Control only a few times. But each time he used it, he made actual strikes with the crop.

It is clear the Monmouth whip rules changed since last year and became more lenient. On the Monmouth Park website, article explains the “house rules” currently in effect. The rules “allow six strikes per race, with no more than two in succession before a horse has a chance to respond. There is no limit on underhanded strikes.”

Some horses do not respond well to the crop, but Hot Rod Charlie is not one of them. Watch his inside move in the stretch run of the Dubai World Cup. When Flavien Prat struck him right-handed multiple times, he responded well on the inside and moved up enough to pick up second.

Yet in the Salvator Mile, Smith used mostly a hand ride throughout the stretch battle with Mind Control. Not once did he try to give Hot Rod Charlie a real pop, even though he was allowed "six strikes per race."

Velazquez took full advantage of those current house rules to get Mind Control to defeat Hot Rod Charlie. Using the crop cannot create miracles with horses that lack the ability. But in a stretch battle with two horses, the small difference with the crop can propel one horse to victory.

Mind Control finished the one mile in 1:35.79 and earned a 104 Beyer Speed Figure in the process, according to Daily Racing Form. Given the head margin, Hot Rod Charlie likely earned the same Beyer Figure.

Even with the win over a star horse, Mind Control is probably the same runner as usual. Once in a while, Mind Control pops up with a nice win in a graded-stakes race. Other times, he finishes in mid-pack with no explanation. His figures are never fast, although a 104 Beyer is good.

Shirl’s Speight ended up 6 1/4 lengths behind Mind Control and Hot Rod Charlie in third. Why was this turf horse even entered? His lone dirt start before Saturday did not give any reason for optimism on this surface. In January 2021, Shirt’s Speight finished a non-threatening fifth by 11 3/4 lengths in a six-furlong Gulfstream optional claiming race on dirt.

Only a few months ago, Shirt’s Speight ran a strong race when closing for the win in the Maker’s Mark Mile (G1) at Keeneland. In middle-distance turf races, this son of Speightstown and Perfect Shirl can pick up more graded-stakes wins in the second half of his campaign.

There is no reason for Hot Rod Charlie supporters to sound the alarm. In all likelihood, Hot Rod Charlie will move on to a Grade 1 or 2 dirt race and bounce back with a huge performance, whether he wins or loses.