What we learned: It's too early to discount Tiz the Law after a loss 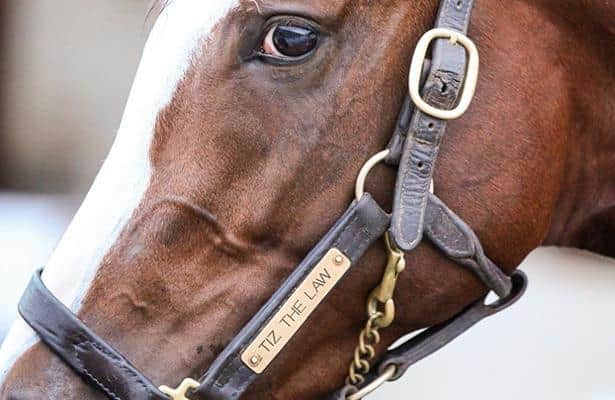 Unfortunately for most bettors, Tiz the Law failed to back up his short odds in Saturday's Kentucky Jockey Club Stakes (G2) at Churchill Downs. As the 3/5 favorite, Tiz the Law crossed the wire third, ¾ of a length behind.

While Tiz the Law lost, there is no reason to hit the panic button yet on his chances of making and contending in the 2020 Kentucky Derby. It's just too soon to tell after only three starts.

Plus, consider the trouble Tiz the Law experienced throughout the race.

To start off, Tiz the Law bobbled at the start before longshot New Eagle crossed over to secure the lead with South Bend and Two Last Words following along outside. The three of them boxed in Tiz the Law, and he noticeably tugged hard while in the pocket.

It is difficult to say whether the bobble led to Tiz the Law getting caught inside, however, as jockey Manny Franco was content to let the speed cross over.

Approaching the far turn, Silver Prospector wound up his run on outside along with longshot Finnick the Fierce. But Tiz the Law remained blocked.

In the stretch run, Tiz the Law found an opening as South Bend drifted out slightly and faded. Silver Prospector held the momentum, though, and he came into South Bend's spot. That kept Tiz the Law in close quarters.

At that point, Tiz the Law switched back to his wrong lead, which also hurt his chances. With Silver Prospector's switch in tactics to a midpack style and uneventual trip, he out-kicked Tiz the Law and kept Finnick the Fierce at bay.

Yet, Silver Prospector only looks like a good horse right now. He held off Finnick the Fierce, an 80-1 shot, by only ¾ of a length and will need to build on that.

Meanwhile, Tiz the Law faded slightly to finish third. However, Tiz the Law only made his third start and traveled over slop for the first time. On paper, his pedigree looked good for wet dirt. But it is never a guarantee.

Tiz the Law still gives the impression of a horse with a big future. There are some evident flaws he needs to work on, though.

The problem with Tiz the Law is that some of his mechanics are sloppy. He needs to break sharper, relax on the backside and switch leads properly. If he cannot relax, then the jockey must keep him in the clear or shoot for the lead if he draws inside rather than sit in another pocket again.

Looking back on his Champagne victory, notice each of those same flaws were apparent. Tiz the Law won that day purely on talent, and that's what made him exciting going into Saturday.

There are six months to go until the Derby and plenty of time for him to mature.

Over at Aqueduct, Tax made his return after a three-month layoff. He lost too, but he ran well given the break and sharp winner.

Tax broke well with the leaders, but jockey Irad Ortiz Jr. elected to settle about 4 ½ lengths off the pace.

Approaching the far turn, Tax made a sharp move to cut through the front pack and take aim at the leader, Performer. As the 2-1 second choice, Performer came into the race with an impressive three-race win streak.

Tax tried his best as Ortiz gave him some strikes with the whip. But Performer held him off and won the race by 1 ¼ lengths to win again.

Given the layoff, Tax ran well enough to believe he could move forward and factor again in higher-level graded stakes races. Plus, he lost to a good horse. The truth is that Tax is never great at passing horses in the lane.

Put Tax on the lead at the top of the stretch, and he is hard to beat late. For example, Tax won the Jim Dandy Stakes (G2) by holding off Tacitus late.

As for Performer, he is also capable of taking the next step beyond a Grade 3. This is a well-bred and lightly-raced 3-year-old colt with familiar names behind him, including Shug McGaughey, Phipps Stable and Claiborne Farm.

The usual Phipps names are on Performer's dam side too. His fourth dam is the legendary Personal Ensign, and the third dam is My Flag.

Mo Forza captured the Hollywood Derby (G1) at Del Mar to extend his own winning streak to three races. But there is not a lot to say, other than he saved ground on both turns and came out in the clear for the stretch.

From that point, Mo Forza only needed to mow down Neptune's Storm.

Mo Forza took the next step for trainer Peter Miller, proving his 18-1 Twilight Derby (G2) win was not a fluke, but rather his current form.

As for the 4-1 Digital Age, he continued his losing streak to five races now. He does get a pass for running into a wall of horses at a critical moment.

Nolde mysteriously lost his good form, as he held good position on the far turn before fading to ninth. At least Nolde beat my choice, Mr Dumas, who folded to 10th.

Barn Tour: Motion on what's next for Mean Mary, other stars
When Mean Mary won by a nose in the New York Stake...