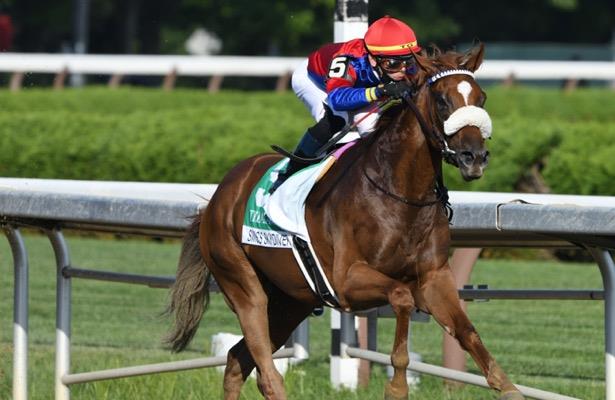 Before Swiss Skydiver ran in the Alabama Stakes (G1) at Saratoga Saturday, stretching out to the 1 1/4-mile distance gave a few handicappers (including this one) some hesitation in trusting her completely. Last month, she gave up the lead in the nine-furlong Blue Grass Stakes (G2), albeit to a top 3-year-old colt in Art Collector.

Swiss Skydiver squashed those stamina fears with an easy victory, reaffirming her status as the main threat to Gamine in the Kentucky Oaks.

As for her trip, it had minimal drama.

Swiss Skydiver broke ahead of most of the fillies, but Javier Castellano on Crystal Ball wanted the lead and asked his mount aggressively.

Crystal Ball secured the lead, and Swiss Skydiver pressed her.

Envoutante settled into the pocket in third, with Spice Is Nice and Fire Coral in the same group just outside of Envoutante in fourth and fifth.

But after that point on the far turn, Swiss Skydiver moved under her own power and took the lead from Crystal Ball. As Swiss Skydiver took control, Harvey’s Lil Goil also moved up under noticeable urging from Junior Alvarado into second. But it seeemed clear she needed more.

Swiss Skydiver won by 3 1/2 lengths over a closing Bonny South in second and probably was capable of more.

Fire Coral finished 43 3/4 lengths behind Swiss Skydiver, which is a great sign. When the field is thinned out at the end, it signals a quality race.

Swiss Skydiver earned a 123 TimeformUS Speed Figure, which puts her in the ballpark of Tiz the Law’s high TimeformUS figure of 126, a factor to consider if the connections want to attempt the Kentucky Derby.

In all likelihood, trainer Ken McPeek and owner Peter Callahan will opt for the Kentucky Oaks. But with Gamine's presence, is it really the easier route?

For those who believe Swiss Skydiver can defeat Gamine, she might even offer value, as Gamine is the probable favorite. If nothing else, Swiss Skydiver is proven in a two-turn route, and Gamine is not.

Harvey’s Lil Goil gave a decent run when moving into second, but she became discouraged late and faded into third. The ceiling is still high for this well-bred filly.

To touch upon Spice Is Nice’s 39 1/2-length loss and Tonalist’s Shape’s 11 3/4-length deficit in the Coaching Club American Oaks (G1) in July, it is clear those two fillies became overrated off their Davona Dale Stakes (G2) efforts in February at Gulfstream and a few other races.

If Spice Is Nice or Tonalist’s Shape enter another Grade 1, avoid them.

With better early speed, Domestic Spending took a step forward in his fourth career start and won the Saratoga Derby Invitational at generous 7-1 odds. As Domestic Spending improved, the favored Decorated Invader lost at 4/5 with no real excuse.

Here is a recap of their trips.

Domestic Spending settled into third and in the clear, only three lengths off the lead. Compare that early position and margin to his Hall of Fame Stakes (G2) effort, where he settled in last and double-digit lengths off.

The 4-1 second choice Colonel Liam failed to show any speed and traveled in sixth, about six lengths off the pace.

On the turn, Get Smokin did not quit. He still held a minor 1 1/2-length advantage over Decorated Invader, with Domestic Spending now alone in third.

At the top of the stretch, Decorated Invader battled Get Smokin under a hard ride and still could not pass him. Domestic Spending moved closer. Colonel Liam rallied on the outside as well, and No Word pushed his way back into the picture in third.

Domestic Spending prevailed by a head over a flying Gufo with No Word in third.

When horses with success at shorter distances stretch out and hang in the stretch run, that is a sign he or she hit his distance limitation. Decorated Invader had every chance to win and just outkick the field.

As for Domestic Spending, he is capable of improving further. Remember, he won the Saratoga Derby in only his fourth start. While this is not an official graded stakes race, for handicapping purposes, he won against a Grade 1-level field.

In this case, unlike the Alabama, the old betting tip of playing against the favorite trying a new distance worked out well and rewarded bettors with a 7-1 winner.