What we learned: This pace-affected horse is burning money 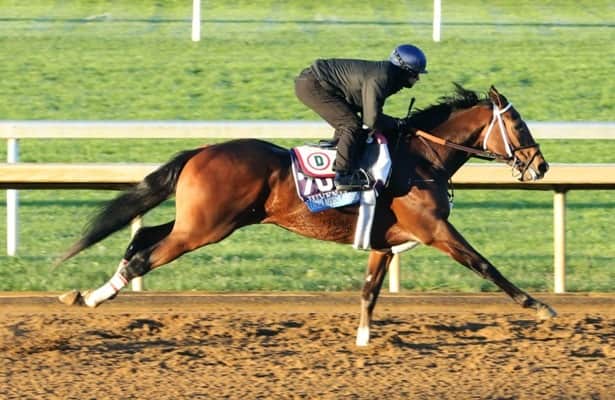 Some horses fit the profile of a pace-compromised runner multiple times and never deliver. Dreamer’s Disease is one current example of this type of money burner. In these cases, it is fair to withhold enthusiasm before unloading on this kind of horse, as he needs to show something more.

Dreamer’s Disease competed in the New York Stallion Stakes Saturday at Belmont Park and finished last by 11 1/2 lengths at 7-2 in another disappointing effort.

In fairness, Dreamer’s Disease did receive early pressure from The King Cheek.

Watch as Dreamer’s Disease goes to the front and The King Cheek travels almost directly beside him, creating an uncomfortable pace situation up front.

Handicappers might look at this replay and forgive Dreamer’s Disease for folding yet again. Even though the fractions say 22.82 and 45.61, mild numbers at first glance for a seven-furlong turf sprint, it is possible the turf course was slow for the entire card. In the filly version of this race earlier in the day, the initial fractions went in 23.22 and 46.15.

Although the pace and final speed figures do not show up yet in the system, it is not hard to imagine TimeformUS labeling the fractions red. Even if they do not consider the pace fast, Dreamer’s Disease felt the other speed horse on him for the entire backside.

However, this is Dreamer’s Disease's fifth loss in a row after winning an optional claimer last October at Keeneland. At what point do bettors say “enough” and divorce themselves from this money burner, even if he was pace-compromised once again?

Ever since that Keeneland optional claiming win last October, he has faded at various stakes levels with pressure and at least once without pressure.

In the Breeders’ Cup Juvenile, Dreamer’s Disease contested the lead and held a one-length advantage on the turn through a fast pace before fading to sixth by 9 3/4 lengths. He earned blitzing TimeformUS Pace Figures of 147 and 150 before fading.

On paper, the Breeders’ Cup effort appears excellent and led most pace handicappers to believe he would deliver soon in a race with a moderate to slow pace.

One month later, Dreamer’s Disease tried the New York Stallion Series Stakes at Aqueduct. It made sense for handicappers to believe a horse who was pace-compromised in the Breeders’ Cup Juvenile would fare well cutting back in distance against a restricted field.

Dreamer’s Disease contested the pace again and faded to seventh by 7 1/4 lengths. As the 3-5 heavy favorite, he burned a ton of money.

In fairness, Dreamer’s Disease stumbled at the start. Maybe he received bad luck for two races in a row, and now bettors could expect a price on him next time.

Dreamer’s Disease went on the shelf and made his return in the Pat Day Mile (G2) at Churchill Downs in May, where the pace scenario came up brutal for his speedy style. Everyone expected Jackie’s Warrior to give other speed horses a hard time.

Handicappers could reason the Breeders’ Cup Juvenile and Pat Day Mile were both tough races for Dreamer’s Disease in terms of quality, and he stumbled in that weaker New York race. Given the right spot, it was still easy to think that Dreamer’s Disease could pay off for bettors soon.

Later in May, Dreamer’s Disease entered the Texas Derby at Lone Star. Finally, he secured an uncontested lead early through fractions of 23.48, 47.15 and 1:11.41.

Watching the race live, it appeared that Dreamer’s Disease found his spot.

Then in the stretch run, Dreamer’s Disease faded to fifth with no fight. It turns out that TimeformUS labeled the 47.15 and 1:11.41 fractions as fast. Regardless, the effort still disappointed many bettors as he had no horses breathing down his neck.

With need-the-lead runners such as Dreamer’s Disease, the fractions are not as important as enjoying the lead alone without any other speed horse nearby. Of course, a balance is still necessary. But the effort came off as poor for this reason.

As shown earlier, Dreamer’s Disease then went on to another fade in the New York Stallion Stakes at Belmont Saturday, completing a frustrating five-race losing streak after the promising Keeneland win.

Yes, on paper it looks like Dreamer’s Disease is supposed to break through and win at some point. He became our choice for the Lone Star race based on the possibility of an uncontested lead.

Enough is enough, though. Dreamer’s Disease needs to show something more than fading to fifth, sixth or seventh in the stretch again. This horse needs to actually show some spirit late and fight in the lane.

Perhaps Dreamer’s Disease will finally win next time and reward the remaining believers. Some horses who fit the pace-compromised profile are not good bets, though, and he is one of those horses.