What we learned: Smile Happy proves experience not needed 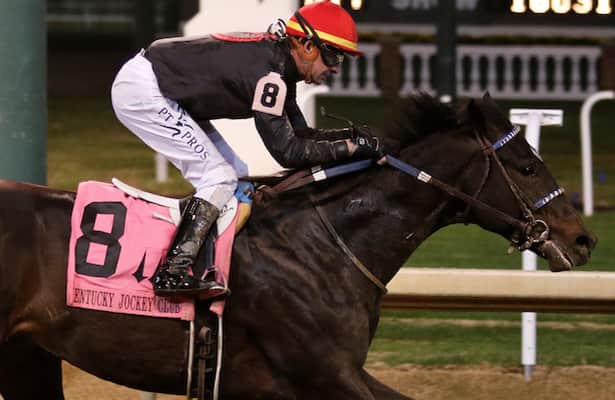 Thanksgiving weekend at Churchill Downs brought many great results. Unfortunately, the fun comes to an end as the track closes down until its traditional spring meet featuring the Kentucky Oaks and Derby in May.

Here are some final thoughts on the Kentucky Jockey Club (G2) and Golden Rod Stakes (G2) results on Saturday and the Clark Stakes (G1) on Friday.

No stakes experience needed in KJC

In most graded-stakes races, handicappers want to favor horses with successful stakes experience. If the experience is not there, then speed figures can make up the difference if they stand out relative to the field.

With 2-year-olds, though, some of those rules for older horse stakes races get thrown out the window. Smile Happy made his debut on the grueling Derby trail in the Kentucky Jockey Club with only one career start and win in a Keeneland maiden race to his credit. Regardless, he overpowered his foes.

Watch how Smile Happy settled into an outside stalking position and made his winning move on the final turn while continuing to run wide.

He eventually drew clear by 3 1/4 lengths under some urging.

Smile Happy did not win the KJC in the same easy fashion as his maiden win. Given that Smile Happy made his graded-stakes debut in the KJC, the extra whip use from jockey Corey Lanerie is understandable.

In addition, making a wide move on the final turn and sustaining the bid in the stretch is not an easy task. Smile Happy continued on and drew clear.

Besides his lack of stakes experience, the interesting part about Smile Happy is that he did not come into the race with any Beyer Speed Figure advantage. Handicappers had to watch his maiden race to understand his raw ability, as he made a quick move to the front and won easily.

Although the Derby trail has many challenges, Smile Happy looks like a contender at this point. Expect him to make noise early next year.

Before meeting in the Golden Rod, Sandstone and Yuugiri already raced against each other in the local Rags to Riches Stakes in October.

In the Rags to Riches, Sandstone set the pace and battled Yuugiri on the final turn. Sandstone then repelled her in the stretch for an impressive win.

The circumstances were different in the Golden Rod. This time, Yuugiri set the early pace and Sandstone went to the attack on the final turn, along with Secret Oath and Dream Lith on the far outside.

To Yuugiri’s credit, she kept Sandstone at bay.

But Yuugiri could not hold off the outside challenge from Dream Lith.

Unlike Smile Happy, Dream Lith came into the Golden Rod with plenty of stakes experience, with her fifth-place finishes in the Alcibiades Stakes (G1) and Spinaway Stakes (G1). Those experiences likely helped a bit.

Yuugiri might benefit from a slight cutback to one mile or seven furlongs. In fairness, though, she did not lose by a big margin.

Sandstone still has potential moving forward. Horses do not break their maiden by nine lengths and then win a $200k stakes afterward by 10 3/4 lengths unless the talent is there. With that said, Sandstone had every chance to pass Yuugiri on the final turn and could not match her late. It is possible Sandstone needs the lead against good competition.

At this point, Dream Lith does not stand out as a major Oaks contender, but it is early. Both Sandstone and Yuugiri might own more raw talent.

Maxfield bows out a winner

One day before the Golden Rod and Kentucky Jockey Club, Maxfield proved this writer wrong by outdueling Midnight Bourbon and holding off a late challenge from Happy Saver to win the Clark Stakes in his final start.

Midnight Bourbon had performed well in difficult races before the Clark. In September, Midnight Bourbon ran second by 2 1/4 lengths in the Pennsylvania Derby (G1) to Hot Rod Charlie and second by a neck in the Travers Stakes (G1) to Essential Quality. In May, he ran second in the Preakness Stakes to Rombauer after contesting a heated pace.

In his most recent start before the Clark, Maxfield ran second to Art Collector in the Woodward Stakes (G1). One start before that, he also closed for second in the Whitney Stakes (G1) behind a dominant Knicks Go. Maxfield also showed a perfect 4-for-4 record at Churchill Downs.

Still, Maxfield’s campaign seemed conservative, considering the attention surrounding him. Not only that, but every time Maxfield tried the Grade 1 level this year, he did not live up to the hype. The connections even ducked out of the Breeders’ Cup Classic in favor of the easier Clark.

To Maxfield’s credit, though, he did everything right in this race.

In the opening quarter, Maxfield flashed more speed than usual to keep up with Midnight Bourbon and took up the outside tracking position.

Even with Maxfield’s improved speed, Midnight Bourbon enjoyed some separation until the half-mile point, when Maxfield crept up closer.

Maxfield did not take advantage of any pace scenario or trip. He beat Midnight Bourbon by challenging him on the turn and outrunning him.

As others pointed out, Midnight Bourbon likes to run second or third. He is untrustworthy as a win bet until he proves himself moving forward.

Maxfield connected with the average fan after his sweeping win in the 2019 Breeders’ Futurity (G1), and those enthusiastic fans never stopped loving him, despite all the layoffs afterward. Because of his large fanbase, it was always difficult to get decent value on him betting-wise.

Maxfield's ability to connect with people makes him a special horse. It is a shame the ride is over for him and his supporters.