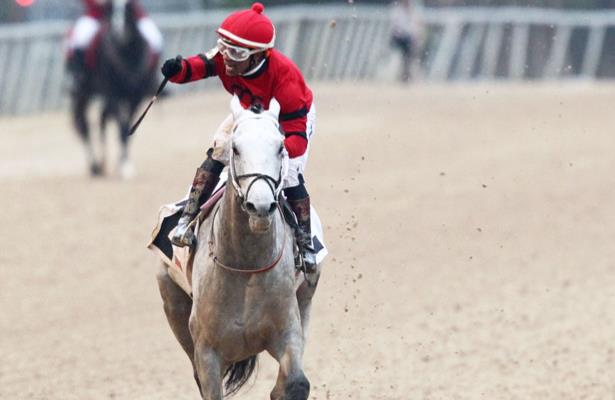 Silver Prospector's win in Monday's Southwest Stakes (G3) at Oaklawn Park exposed a major flaw in relying on speed figures to handicap. A bad trip can result in a slow figure, obscuring the horse's true capabilities.

In the case of Silver Prospector, he dropped in the Smarty Jones Stakes to a 98 TimeformUS Speed Figure, his first number below 100 since his 77 in the Kentucky Downs Juvenile Turf Sprint. His figures in the Street Sense Stakes and Kentucky Jockey Club (G2) also resulted in a 101 and 103, which did not match his 111 earned in an Oct. 13 maiden sprint.

On paper, it is easy to see why Silver Prospector was labeled as a regressing type in route races -- or, really, in general. But in that Smarty Jones fourth-place effort last month, he also ran out of position for the first half against a slow pace.

Silver Prospector made a move on the far turn, but his poor early position and slow pace made it impossible to win. He tipped out and fought his way to fourth, two lengths behind Shoplifted and 7 ½ lengths behind Gold Street.

In the Southwest Stakes, most bettors flocked to a new face Answer In and made him the 8/5 favorite, while Gold Street became the second choice by dropping from 6-1 to 7/2. As for Silver Prospector, he went off at 9/2.

But with some adjustments, Silver Prospector turned the tables.

Instead of settling six lengths off the pace, Santana saved ground on the rail and let Silver Prospector move up on his own will into the pocket.

Wells Bayou set the pace with a one-length advantage over Villainous, who had taken Gold Street's position on the first turn and caused him to lose ground early. Answer In followed along with the leaders, right outside of Villainous and Silver Prospector. Meanwhile, Gold Street ran in mid-pack.

Silver Prospector won by one length over Wells Bayou, with 5 ½ lengths separating Wells Bayou and the third-place Answer In.

He actually put in a similar run in the Smarty Jones, but the back position and slow early pace made it difficult to notice.

The smaller 1 ½-length deficit led Silver Prospector to this striking position and gave him an optimal chance to post a good number. Silver Prospector earned a 119 TimeformUS Speed Figure, as did runner-up Wells Bayou.

As for Wells Bayou, the question is whether he can sit off other horses. He ran a credible race to put away every horse except Silver Prospector.

Answer In might deserve another chance after the wide first turn cost him.

Shoplifted, however, looks like an average horse who has reached his limit.

Gold Street needs to either set the pace or contest the lead for his best run. It may also be that he simply excels over wet tracks.

Is Charlatan the next big Baffert 3-year-old?

Charlatan destroyed a 4-horse maiden field on Sunday at Santa Anita  by 5 ¾ lengths, with 17 ¾ lengths separating first from last. There is some debate over whether this Bob Baffert-trained colt could become the next Justify, or if there are distance limitations.

First of all, notice how easily Charlatan strides away in the stretch. He switches leads easily and runs fairly straight. Those are two good signs.

Visually, it almost looks like Drayden Van Dyke is only holding on.


His TimeformUS figure is not posted at this time, but Charlatan earned a significant 105 Beyer Speed Figure for the six-furlong win. Justify earned a 104 Beyer Figure in his career debut.

Also note the third-place Lane Way, who had finished 4 ¼ lengths behind Nadal on Jan. 19. Charlatan crushed Lane Way by 13 lengths.

But can Charlatan route?

Charlatan's sire, Speightstown, is not known as a long-distance influence. But he is capable of siring routers such as Performer, Sharing and Qurbaan.

The bottom side is more promising, as his dam, Authenticity, won the 2013 La Troienne Stakes (G2) and Shuvee Handicap (G3) at nine furlongs. Authenticity produced Hanalei Moon, who has won up to 1 1/16 miles.

On paper, there are no major signs Charlatan cannot go at least a middle distance. As the old saying goes, though, he still needs to prove it.