What we learned: Saving ground helps Bell's the One at Churchill 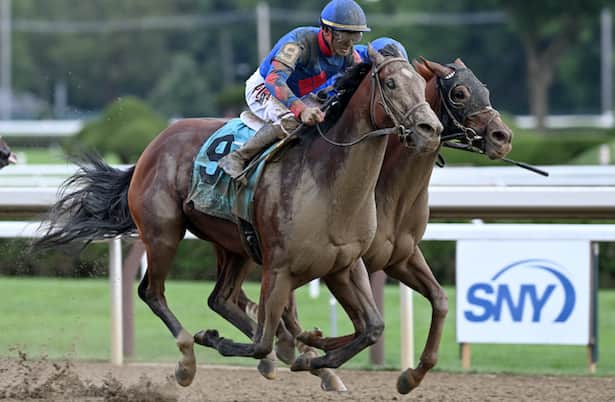 Trainer Neil Pessin took a pass on the Breeders’ Cup Filly & Mare Sprint with Bell’s the One last weekend. After winning the $300,000 Dream Supreme Stakes at Churchill Downs on Saturday though, Pessin is probably not losing sleep over the decision.

Watching the replay, she had a great ride.

Jockey Corey Lanerie helped Bell’s the One’s chances by staying patient on the turn rather than tipping out too early. Club Car already made a wide move to join the front, while Bell’s the One moved forward on the rail.

Watch as Bell’s the One travels inside of a fading Blinkers on the turn.

She then makes a smooth transition to the outside.

Club Car went by Frank’s Rockette slowly to take the lead in midstretch. She put up a minor fight when Bell’s the One came rolling next to her, but Bell’s the One proved too strong in the end. Bell’s the One hit the wire one length in front of Club Car to capture the Dream Supreme.

If anyone follows Lanerie’s style of riding long enough, it becomes clear he likes saving ground when possible in the same style as Calvin Borel. In this race, the tactics likely made up the one-length difference late.

In any case, Bell’s the One deserves credit for a great campaign. She won three other stakes races besides the Dream Supreme, including the Roxelana Stakes, Honorable Miss Stakes (G2) and Thoroughbred Club of America Stakes (G2). While the Roxelana is ungraded, it deserves one.

The blog choice Club Car gave her best shot under Joel Rosario. Ultimately, she had to settle for second. But, she also had a nice year with a win in the West Virginia Secretary of State Stakes and runner-up finishes in the Chicago Stakes (G3), Thoroughbred Club of America and now the Dream Supreme too.

Frank’s Rockette faded to third in the stretch.

She began 2021 in good order by winning the American Beauty Stakes at Oaklawn, but Frank’s Rockette’s only other win in six starts afterwards came by a head over Blinkers in the Saylorville Stakes at Prairie Meadows.

Bettors who still trust Frank’s Rockette remember her 2020 form. While she can still hit the board in stakes races, she is clearly one step slower.

On paper, the Bob Baffert-trained Eda had a tremendous pace advantage in the Desi Arnaz Stakes at Del Mar. Bettors made the speedy and talented filly 1-5, and she did not disappoint backers with a clear win over four other fillies.

The actual pacesetter came as a minor surprise though.

Instead of Eda leading the field on an easy pace, her regally-bred stablemate Under the Stars adjusted to blinkers by showing speed.

Eda took up the pressing position next to Under the Stars.

Tonito’s followed the pair in third, while the longshot Endless Thirst traveled in fourth before a troubled Lady T passed her while approaching the turn.

On the turn, Under the Stars began to fade and Eda took the lead. Tonito’s made a bid to challenge Eda, but Eda put Tonito's away with some mild urging. Eda then began to draw clear towards the wire for a 4 ¼-length victory.

Eda does not give the impression of a Kentucky Oaks candidate, at least not yet. In addition, Eda cannot earn Oaks points under trainer Bob Baffert anyway, nor can Baffert start horses at Churchill Downs. However, Eda can carve out a nice sprinting campaign in non-Churchill Downs stakes races.

Tonito’s had every chance to go by and could not sustain the bid. Given Tonito’s only made her second career start though, there is room for improvement. She broke her maiden over turf, giving her many options.

Under the Stars remains one to watch as well, especially if she stretches out to a route distance. This is a half-sister to the 2012 Kentucky Derby and Preakness Stakes runner-up Bodemeister. Even though she faded to third this time at a sprint distance, Under the Stars did gallop out past Eda and Tonito’s, which comes off as a good sign she did not get tired.

Sometimes true routers cannot quicken in the same fashion as a sprinter such as Eda at shorter distances. In a route though, the more moderate tempo helps.

Besides the distance issue, Under the Stars might only need more time to develop before she starts to realize her potential.

As for Lady T, she bolted to the left shortly after the start. Although Lady T eventually made a move to pass Endless Thirst while approaching the turn, ultimately the early incident affected her and she lost by 17 ¼ lengths.

Eda, Tonito's and Under the Stars are ones to keep a tab on.

Also, Del Mar needs to fill these 2-year-old stakes races up with more horses. When bettors see the same trainer has 40 or 60 percent of the entries in a short field, it discourages them immediately from playing.