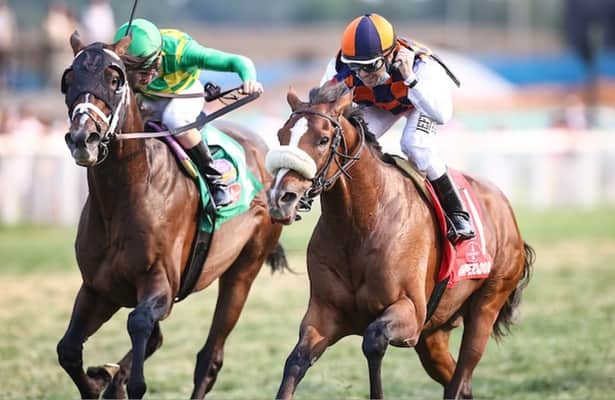 Imperador won his first race in North America in six tries by taking the Calumet Turf Cup (G2) at Kentucky Downs Saturday. Approaching the final turn, it took a good decision by jockey Joe Talamo to get the job done, while the favorite Arklow was possibly the victim of a crucial mistake from rider Florent Geroux.

The replay tells the story.

Approaching the final turn, Arklow had a chance to circle the leaders by tipping outside of Tide of the Sea or to wait behind the pack for an opening. Meanwhile, Imperador on the inside had followed Arklow’s move toward the leading group.

Geroux chose to wait for room on Arklow, and Talamo decided to give up some ground and take Imperador outside of Tide of the Sea for a clear run.

Talamo’s decision won him the race.

Imperador needed to work a little bit to get outside of horses, but now he could make his final rally unobstructed. He took advantage of the position and made his way to the front past Glynn County. As Imperador took control, Arklow had to steady around Big Dreaming, Epic Bromance and Channel Cat as the horses played pinball.

Arklow managed to straighten out and make one final run, but Imperador had enough of an advantage and held at the wire to deny Arklow his third Turf Cup.

The purpose of this post is not to pick on Geroux and say there was only one definite route to win and one route to lose. Sometimes waiting behind horses works out. In many cases, a hole opens and rewards the ground-saving jockey and horse.

But in this specific race, the safe and wide route resulted in the win.

For bettors who had singled Arklow (such as this one), it was a frustrating defeat. But that is the nature of turf racing. Numerous turf races involve a clustered field in the stretch run, and sometimes the best horse does not find the proper room late.

With his runner-up finish in the United Nations Stakes (G1) at Monmouth in July and now a win in the Calumet Turf Cup, the 5-year-old Imperador is moving forward at the right time for trainer Paulo Lobo. He might need one more step forward to contend for real in the Breeders’ Cup Turf and not end up as an also-ran.

As a 7-year-old horse, Arklow is not getting any faster. But the final run he made late in the Turf Cup proves he still packs a punch. Would a different rider benefit Arklow? In his two starts before the Turf Cup, he clipped heels and stumbled in the United Nations and tried to rally from 11th in the Del Mar Handicap (G2). Again, Geroux is a good rider who wins often, but it does not hurt to shake up the formula once in a while.

Despite getting outrun late by Imperador and Arklow, Glynn County also ran well for third. This 4-year-old colt has run well in his last three starts against graded-stakes company and deserves a shot at the Breeders’ Cup if the Turf is not too full already.

Got Stormy disappoints in Turf Sprint

Gear Jockey has developed into an ultra-consistent turf runner at various distances. This year alone, the 4-year-old colt shows an 8: 4-1-2 record after his victory in the Turf Sprint (G3), one race before the Turf Cup at Kentucky Downs.

From a trip standpoint, there is not a lot to note.

Gear Jockey pressed the leader Bombard in the early stages.

When the time became right, he put Bombard away in the stretch to win by more than two lengths.

Bombard faded toward the wire, while Diamond Oops barely did enough to edge out Bombard for second. Bombard held third, while Fast Boat finished fourth.

Casa Creed closed for fifth, but his trip looks interesting to watch. On the wide turn, he had nowhere to run from last under Junior Alvarado. Alvarado had to tip Casa Creed out. But he did not reach the outside position until past mid-stretch.

From there, Casa Creed made a strong closing bid. But the move came too late. Trip handicappers might want to take note of Casa Creed’s traffic problems.

What happened to Got Stormy?

In the stretch, she had room to move forward between Imprimis and Stubbins if she had the power to go through. But it took Got Stormy almost the entire stretch for her to pass both horses. Then, Casa Creed outran Got Stormy late in the stretch for the fifth spot.

Got Stormy is a frustrating runner for bettors to support, as sometimes she fires a quality race and other times she does not make an impact for no real reason.

Perhaps trainer Mark Casse was using the race only to get Get Stormy in shape for the Breeders’ Cup. Even if that is true, she is still not one to take alone as a bettor.