What we learned: Rated R was ignored before Saturday win 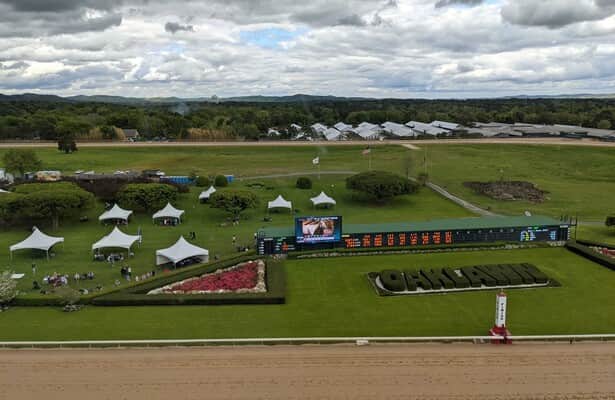 Bettors let the old man Rated R Superstar drift up in odds in the Fifth Season Stakes at Oaklawn on Saturday, but he showed there is still life in him. Despite an early inside move on the backstretch, Rated R Superstar found enough late to battle two other horses in the stretch for the win.

Here is a recap of the entire trip.

As Mucho sets the pace with pressure from Thomas Shelby and Concert Tour, Rated R Superstar was initially last through the opening quarter.

Rated R Superstar then moved up through the inside to reach third by the half-mile.

At that point, Rated R Superstar had to wait for a short while under jockey David Cabrera. The 9-year-old gelding then needed room in the pocket position with Mucho in front of him, Thomas Shelby to the side and Concert Tour nearby as well. Cabrera chose to take a short breather.

In the meantime, Mucho and Thomas Shelby opened up slightly on the second turn, but Concert Tour could not keep up with them. When Concert Tour failed to keep up with the leading pair, it created enough room for Rated R Superstar to tip outside and take aim at the leaders.

It took urging from Cabrera to get there, but Rated R Superstar eventually mowed down Mucho to prevail by a neck and pick up his 10th overall win in an incredible 57 starts. Thomas Shelby hung around for third while losing by three-quarters of a length, and Necker Island completed the superfecta, 3 1/4 lengths behind Thomas Shelby.

Looking back on his 2021 campaign, Rated R Superstar showed some good efforts from last summer, including a win in the Governor’s Cup Stakes at Remington Park over Plainsman in August and a second to Plainsman in the Jim Rasmussen Stakes at Prairie Meadows last June. He earned 114 and 117 TimeformUS Speed Figures for those races.

Rated R Superstar did regress to a 108, though, while finishing second in an allowance race at Remington in September prior to hitting the shelf. Perhaps there was a physical problem. Rated R Superstar's old age possibly scared off bettors as well.

With good spotting and some racing luck, Rated R Superstar can pick up a few more stakes races before his inevitable retirement. Most horses do not run as 10-year-olds, although maybe there is enough in the tank for two more campaigns including this one. Coincidentally, his namesake Edge also competes at a high level in the twilight of his wrestling career.

Here are some thoughts on the also-rans:

Mucho made his one-mile debut in this race after 29 previous starts at seven furlongs or shorter, and he ran well despite the loss to Rated R Superstar. The solid runner-up effort at one mile opens up opportunities. From a handicapping standpoint though, Mucho is almost never a good horse to trust alone as he never dominates, even when he does win.

Thomas Shelby hung in there for a close third. Visually, he looks like a better horse at nine furlongs. He only lost the Tinsel Stakes by three-quarters of a length to Lone Rock at nine furlongs, and Lone Rock is better than Rated R Superstar.

Concert Tour faded to last at 3-2 after flashing enough early speed to run with Mucho and Thomas Shelby in the first half-mile. By the second turn he failed to keep up with the leading pair, and then he came up empty in the stretch. The concern is that he put no effort late. Good horses with talent do not simply quit and lose by double-digit lengths. Usually, good horses stop trying when they lose their spirit to run. A good example is Hidden Scroll. Maybe Concert Tour deserves one pass for the non-effort. Trainer Brad Cox might need more time to get to know the former Baffert-trained runner.