What we learned: Pipeline still best horse in Perryville defeat 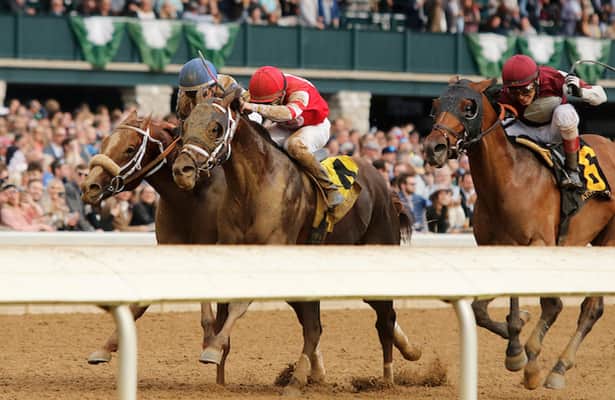 Pipeline faded to third as the 8-5 favorite in the Perryville Stakes at Keeneland yesterday. After making a gradual move before the turn and briefly taking the lead in mid-stretch, he could not hold off He’smyhoneybadger and Ram, who both made late moves to finish 1-2.

If bettors are in a forgiving mood, they can excuse Pipeline’s effort because of the fast pace. The first three fractions of the Perryville went in 22.16, 44.97 and 1:10.52, which all were faster numbers than the Raven Run Stakes (G3) fractions at the same distance two races later in the card.

The 44.97 Perryville half-mile set by Boca Boy and Cool Quest looks especially fast, considering the fillies went in only 45.89 for the half-mile.

From watching the replay, it looks like Pipeline started his move a few seconds before the 44.97 flashes on the screen, right as Cool Quest led.

Pipeline slowly inched up about a half-length behind Cool Quest on the turn. But both of them already had run too fast around the half-mile point.

To Pipeline’s credit, he did well to put away Cool Quest.

John Velazquez then attemptd to angle Pipeline out closer to He’smyhoneybadger to see if Pipeline can fight him off, but He’smyhoneybadger slowly gained the advantage, while Ram made his final stab too late and picked up second narrowly over Pipeline.

Pipeline was the only runner in the front group at the half-mile point to remain in position to win in the stretch. The early pacesetter Boca Boy faded to eighth and 15 lengths behind. Cool Quest faded to sixth by 6 1/2 lengths. Soup and Sandwich folded to last and 18 1/2 lengths behind.

Despite finishing third, Pipeline lost by only a neck.

Although all three horses were discussed in the blog, Pipeline was the “single” while He’smyhoneybadger and Ram were underneath horses along with Runway Magic.

Soup and Sandwich was not a blog selection. To write briefly on the former Derby also-ran, backers should not give up on this colt after one bad race following a significant layoff. In handicapping, the first race off the layoff is always forgivable no matter how bad he runs.

Before Soup and Sandwich’s last-place finish in the Kentucky Derby, he had run second in the Florida Derby (G1) in only his third career start.

Right now, it is too early to assume he cannot reach that level again.

In April, Caramel Swirl broke her maiden by 10 1/4 lengths at Keeneland. On Saturday, she took her first graded stakes victory on this course with a closing win in the Raven Run Stakes (G2) over Joy’s Rocket.

From a visual standpoint, the stretch run almost resembled what happened in the Perryville between the top three finishers.

The presser Cilla briefly took over the lead from the inside runner. But she had to face the oncoming challenges of Joy’s Rocket and Caramel Swirl.

Unfortunately, Cilla had no answer for either closer.

The outside filly Caramel Swirl prevailed by a head over Joy’s Rocket, a 24-1 long shot. Cilla faded back to third, two lengths behind Caramel Swirl.

In this case, Caramel Swirl won and gets full credit. Caramel Swirl closed from seventh, but she did not take advantage of any fast pace. As stated above, the half-mile fraction of 45.89 appears ordinary compared with how the males ran at the half-mile, which gave Cilla the advantage heading into the stretch run if she could last the distance.

Cilla was the top blog selection, but unlike Pipeline, she could not even keep up with the two closers in the stretch and lost two lengths to them. Perhaps six to six-and-a-half furlongs is the better distance for Cilla.

Joy’s Rocket made an important step forward off her bad return race at Kentucky Downs. Last year, this filly had shown talent in two six-furlong races sandwiched between two unsuccessful attempts at one-mile routes. It looks like seven furlongs is not a problem either, which opens more options.

As for Caramel Swirl, cross out the poor attempt in the Charles Town Oaks (G3) on the bullring course and the Eight Belles Stakes (G2) clunker at Churchill Downs. Besides those races, she has done little wrong.

Perhaps Caramel Swirl and Joy’s Rocket will develop into major players in the filly and mare dirt sprinting division. Right now, they are one or two ticks below the top level, but it is not hard to imagine them as major contenders in the 2022 Breeders’ Cup if they stay in training.