What we learned: Pace made it easy for Obligatory in Chilukki 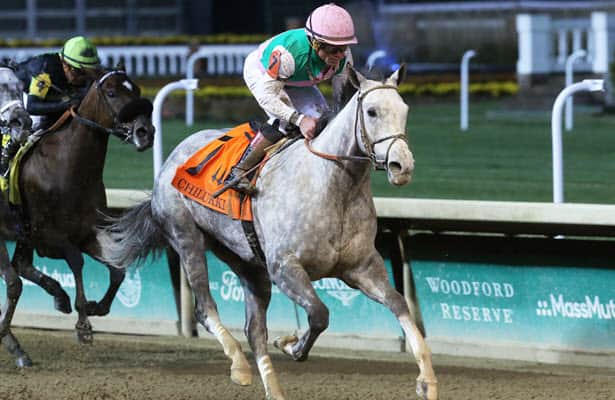 Obligatory came into the Chilukki Stakes (G3) at Churchill Downs as the class runner in the field, with a local Grade 2 win in April and two runner-up finishes in Grade 1s during the summer.

Obligatory also had been known to throw disappointing races. But in this case, the speed types up front made it easy on the favorite by setting up a heated pace well in front of her.

Here is how it happened.

Obligatory initially broke with the field. But the separation of the front group from the favorite soon occurred, thanks to Princess Causeway.

Princess Causeway veered out and then remained out of control by tugging jockey Chris Landeros quickly to the lead. The incident baited Matera, She Can't Sing and Miss Bigly into running faster than ideal.

Princess Causeway opened in a swift 22.77 seconds as Landeros tugged on her.

Matera, She Can’t Sing and Miss Bigly caught up to Princess Causeway, but those three used energy in the process to reach the pacesetter. About seven or eight lengths behind the leaders, Obligatory enjoyed a fast pace and no traffic. She settled into a perfect position.

After a half-mile in 45.98, Princess Causeway began to feel the heat, first from She Can’t Sing and then from Miss Bigly to her outside. Miss Bigly briefly took command, but she had Matera inching up beside her.

In addition, Obligatory began gobbling up ground. She cut into the leader's margin by a significant amount at the start of the turn and then tipped to the outside for a clear shot at the top of the stretch run.

At this point, Obligatory under Joel Rosario had the race won.

Miss Bigly led into the turn by a small margin over Matera. But Rosario kept the mild hand ride in motion on Obligatory, and she easily went by both of them.

Obligatory won by 2 1/4 lengths over Matera in second and Miss Bigly in third. From a visual standpoint, she won more easily than the margin indicates, although the pace setup described above did play a role.

Matera fought hard to edge Miss Bigly for second. Considering the heated pace scenario, Matera and Miss Bigly ran well to complete the trifecta. Notice that the run-off pacesetter Princess Causeway folded all the way to seventh and last by 21 1/2 lengths. She Can’t Sing also faded back to sixth by 17 3/4 lengths.

If Obligatory runs next year, she is capable enough of winning another graded-stakes race. At the same time, she is not a super closer either. Give Obligatory the right pace, no traffic and a track she loves such as Churchill Downs, and she can fire well enough for a small margin win.

As for what handicappers can learn from the race results, it is that Azul Coast's stablemate Ax Man cannot handle nine furlongs, while the distance stretches out his other stablemate Eight Rings to his limits.

Both Eight Rings and Ax Man had reasonable trips. Ax Man initially went straight to the lead under Mike Smith, while Eight Rings sat about one length off him in second. Azul Coast took up a wide position in sixth.

For the Grade 3 level, those are moderate fractions.

Remember, Eight Rings had chased 21.88 and 44.91 fractions set by Life Is Good in the Breeders’ Cup Dirt Mile only two weeks before. A 48.41 half must feel like nothing in comparison to that kind of blazing speed.

On the far turn, Ax Man began to feel the heat from Eight Rings. However, both Bob Baffert-trained horses needed to watch out for Azul Coast, who had moved forward while traveling about three or four wide. Azul Coast went up alongside Eight Rings to temporarily give Baffert the top three positions at the top of the stretch.

Baffert’s dominance of the trifecta did not last. In a confirmation of his distance limitations, Ax Man threw in the towel and began to drop back quickly. Pace-wise, there was no reason for him to quit, but he stopped.

Ax Man’s defection left Eight Rings to battle with Azul Coast. Kiss Today Goodbye also became a win threat right behind them on the outside.

Ax Man cannot handle nine furlongs. As for Eight Rings, the distance is probably his limit considering he could not fight off Azul Coast and Kiss Today Goodbye after moderate fractions compared to two weeks ago.

Then again, maybe Eight Rings felt tired after the quick return from the Breeders’ Cup. Some other handicappers were against him for that reason. Plus, Eight Rings fares better with the lead and did not secure it, as his stablemate Ax Man had the luxury of controlling the early pace.

If Eight Rings tries nine furlongs again, consider whether he can secure the lead before betting him on top. Otherwise, it seems like a half-furlong too far for him. Races such as the Metropolitan Handicap (G1) and Breeders’ Cup Dirt Mile again look like reasonable goals in 2022.