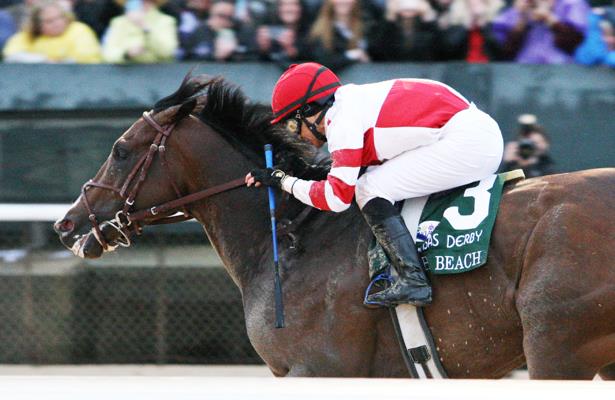 During Saturday's Arkansas Derby (G1) at Oaklawn Park, Omaha Beach made an early move and sustained it throughout the stretch run with another gear to outduel a legitimate Bob Baffert-trained Kentucky Derby contender in Improbable. He also moved early in last month's Rebel Stakes (G2) and sustained it when he held off Game Winner.

Why is it impressive to make an early bid and still win the race? Most horses cannot recover from a move made too early. The wall is hit at some point, as Mine That Bird found out in the 2009 Belmont Stakes when he faded to third in the stretch after an early move that briefly took him to the lead. It takes a horse with a bit more talent and endurance to hit the front, then sustain it for rest of the race.

Jockey Mike Smith decided to let Omaha Beach go around the first turn. For a nine-furlong race, it is impressive Smith felt confident enough to do this.

The inside speed, One Flew South, was always going to fold, but he likely did not expect a big challenge so soon after securing the lead. Likewise, Omaha Beach probably discouraged Jersey Agenda, as he was supposed to lock in a pressing trip outside One Flew South.

Omaha Beach received a slight breather after taking the lead. But he did not rest long, as Jose Ortiz knew he had to let Improbable go early, too. After Omaha Beach hit the half-mile point in a snappy 47.50, Improbable let loose and challenged Omaha Beach approaching the far turn. Omaha Beach had another gear and kept going.

In the stretch run, the two stars separated from the field. Yet, Omaha Beach looked in command the entire time and proved best, while Improbable needed heavy urging.

When speed horses compete in the Kentucky Derby, it is important they can establish position early in an 20-horse field and still hold enough in reserve.

Omaha Beach showed he is capable of making an early move and winning on fast or sloppy dirt, and he is a Top 3 Derby contender because of that kind of versatility.

With that said, congratulations to Omaha Beach, Improbable and Country House for cracking the Top 20 in Derby points.

What to do with Country House

Unfortunately, Country House breaks slow and will find his way shuffled back in the craziness of the opening Derby quarter. But if timed correctly, his one late move is good enough to pick up third or fourth and add some spice to superfecta tickets on the first Saturday in May.

Those who believe in back wheeling could put some faster horses on top and key Country House alone in the third or fourth slot. He is highly usable in that fashion.

He shouldn't be viewed as a win contender, though. In a normal-sized field, it is difficult enough to cut through traffic and still win. Against 19 other horses, he will need special talent or an excellent ride and trip.

Country House only possesses modest talent, however. He might improve as he progresses on, but this is not a Derby win candidate.


A few hours earlier in the Lexington Stakes (G3), Owendale upset the field. Yes, it is the same Owendale who I accused of earning overrated Beyer Speed Figures at Fair Grounds and recommended to toss. On TimeformUS, he looked too slow to win.

Well, Owendale proved me wrong with a wide, winning bid.

What is amazing is that Owendale went wide around both turns and showed no ill effects of the trip. Most horses cannot win like that, as they lose too much ground.

Was Owendale always this good, or did he pop up with a big race contrary to his prior form? The latter is more likely, but then again, this writer tossed him. Perhaps he threw the clunker at Fair Grounds in the Risen Star (G2) and ran normal here.

Despite the win, Owendale will not reach the Top 20 in Derby qualifying points. But it is not difficult to see the connections taking a shot at the Preakness Stakes.


Also outside of the Top 19 is Anothertwistafate, who finished second to Owendale in the Lexington Stakes. A few people commented that he was given a bad ride.

What else was Javier Castellano supposed to do?

Zenden kept Anothertwistafate locked in behind horses, but once they turned for home, a huge opening appeared on the inside of pacesetter Knicks Go. Anothertwistafate made his move into that path under heavy right-handed strikes from Castellano.

But even with a clear path, Owendale’s kick was too powerful for Anothertwistafate. What an odd sentence to write, but it is a true one.

You could argue the dirt track favored outside closers the entire day, but that is horse racing. Anothertwistafate had his chance in the Sunland Derby (G3), too, and failed to get the job done after both races with 38 total points. Right now, he is 23rd in points.

With some defections, he may eventually sneak into the Top 20. It will take some luck and slight setbacks to other horses within the cutoff line.

Rushing Fall on top of her game

Congratulations to Rushing Fall for carrying over her 3-year-old form to this year with a win in the Jenny Wiley Stakes (G1).

While she got the job done, it is still a good idea to use caution when a horse steps outside normal conditions. For example, Raging Bull faced older horses for the first time in the Maker’s 46 Mile (G1) last Friday, and that race proved too much for him.

While Raging Bull might still improve, it was nice for fans to see a favorite such as Rushing Fall get off to a fast start.