What we learned: Olympiad endures fast pace in Foster 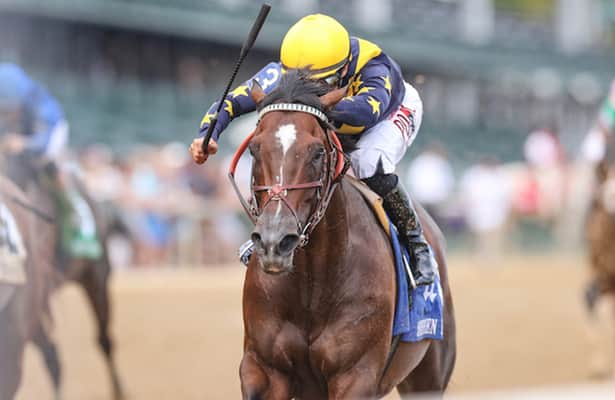 Olympiad came into the Grade 2 Stephen Foster Stakes at Churchill Downs on a four-race win streak, with three of those wins in graded-stakes races. But in most of those races, he had the fortune of tracking the pacesetter through easy fractions before taking over the lead.

This time, Olympiad had a tougher pace scenario, with Caddo River likely to send from the rail and runners such as Americanrevolution and Mandaloun lurking behind and waiting to attack them on the far turn.

Before the Stephen Foster, Caddo River had put together his own winning streak of three straight races in optional claiming races, with the first two at Oaklawn and the most recent one at Churchill Downs. When Caddo River won at Oaklawn on May 1, he drew clear by 5 1/2 lengths with a career-high 125 TimeformUS Speed Figure, which is a speed figure fast enough to win most Grade 2s.

Even though Caddo River had been running as a tracker or stalker recently, the rail position figured to encourage more aggressive tactics. This theory turned out true as Caddo River under encouragement from Ricardo Santana Jr. went to the front with Olympiad pressing him. From there, Caddo River posted fast fractions of 23.05, 46.45 and 1:10.64.

Mandaloun stalked Caddo River from the outside in third, while Last Samurai, Americanrevolution and Title Ready composed the next trio. Proxy lagged nine lengths behind the pacesetter after a half-mile.

As they started to round the far turn, Olympiad began to turn up the pressure and move alongside Caddo River. At the top of the stretch, Olympiad had the lead and he did not look tired despite the early pace.

Mandaloun briefly kept up with the pair while running three wide on the turn, before surprisingly coming up empty upon entering the stretch. Meanwhile, Caddo River began a steady fade when Olympiad took over.

By mid-stretch, only Americanrevolution was in range to catch Olympiad, but Luis Saez rode him hard as Olympiad kept roughly a two-length advantage under mild encouragement from jockey Junior Alvarado.

Caddo River faded all the way back to sixth by 11 lengths behind Olympiad after setting the pace and taking pressure from the eventual winner. Did the nine-furlong distance affect him? Last year, he finished second in the Arkansas Derby (G1) at Oaklawn after setting a pressured pace. Caddo River went too fast this time with a better horse close by.

Even with the race's Grade 2 label, Olympiad arguably won the Stephen Foster against a Grade 1-quality field. The runner-up Americanrevolution had the Cigar Mile (G1) to his credit, and Mandaloun won both the 2021 Kentucky Derby and Haskell Stakes (G1) via disqualification. If nothing else, Olympiad deserves to move on to the next level officially.

Also, critics cannot say Olympiad handles only slow-paced races anymore. For the distance, they went fast enough to give Olympiad a test early, and then the Grade 1-proven Americanrevolution fired late.

Without a doubt, Olympiad is ready for Grade 1 races such as the Whitney Stakes, Jockey Club Gold Cup and Woodward Stakes.

Proxy hit the board again in another graded-stakes race with his closing third-place finish. He seems a small step below Olympiad. But if the connections follow Olympiad to Grade 1 company, Proxy can prove competitive and continue to hit the board with a good trip and pace.

Mandaloun gave another flat performance by finishing a well-beaten fourth. But he might rebound in his next start for trainer Brad Cox.

Last year, the Cox-trained Knicks Go ran a lifeless fourth in the Metropolitan Handicap (G1) in his first start back after fading in the Saudi Cup. After the disappointing effort, though, Knicks Go found his best form and closed out the year by winning the Breeders’ Cup Classic.

Caddo River might need more time in Grade 2 or 3 races, and a slight cutback to either a mile or 1 1/16 miles. Without Olympiad nearby, Caddo River should improve wherever he goes. If Caddo River draws outside, he also can revert back to stalking tactics.

If Olympiad heads toward the Whitney Stakes at Saratoga, he might face Life Is Good in one of the dream matchups of the summer. Although Olympiad a slight step below Life Is Good in speed figures, it is hard to discount him at this point after he beat a quality field Saturday.

Win or lose, expect another great performance from Olympiad wherever he goes.