What we learned: Keeenland's speed bias creeps back into play 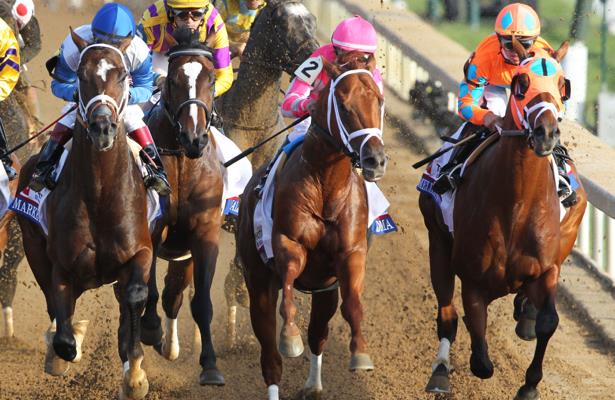 Before Keeneland installed a new Polytrack surface in 2006, bettors knew the main track as wildly speed biased at times. Pacesetters such as Wild Syn and Sinister Minister won the Blue Grass Stakes but lnothing else the rest of their careers. Wild Syn lost 12 straight races, while Sinister Minister lost eight times to end his time on track.

Eventually, Keeneland changed its mind on synthetic in 2014, joining Santa Anita and Del Mar in converting back to a traditional dirt surface. It initially seemed more fair to closers than the pre-2006 dirt, but in the past three days talk of a speed bias reemerged.

In fairness, it is still early in the meet to make any long-term assumptions with three days in tow. But the flow of most main track races at this point favors the front runners.

For example, in Saturday's Blue Grass Stakes (G2), Vekoma pressed the pacesetter Somelikeithotbrown early on, took command on the far turn and drew off.

Win Win Win -- who I underestimated -- and Signalman both made moves in the stretch run, but neither horse looked like a threat to Vekoma at any point. In particular, Win Win Win came all the way from 13th, which means any bias affected him the most.

Somelikeithotbrown did not fade out of the picture, ending up fourth late.

In the Ashland Stakes (G1), a 52-1 Dallas Stewart-trained longshot named Out for a Spin pressed the favorite Jaywalk through a fast opening half in 46.46.

On the far turn, Out for a Spin inched clear of the Breeders’ Cup Juvenile Fillies champion and then held off a bold move by Restless Rider on the outside.

The longshot Bizwhacks loomed large on the outside as well, but once she hit the top of the stretch, she hit a wall and never made up more ground. Jaywalk found a bit more life in the stretch and managed to stay in range of the leaders while settling for third.

Assuming a biased track, Jaywalk is finished as a top horse. Last time, she had the layoff excuse, and John Servis possibly undertrained her. This time, she was beaten.

Was the 52-1 longshot winner helped by a bias? If nothing else, it is something to watch. On paper, Out for a Spin's good races came over wet tracks.

Out west, Roadster arguably emerged as the top 3-year-old in Bob Baffert’s barn with his closing win in the Santa Anita Derby (G1).

Approaching the far turn, it actually looked like Roadster lost contact with the front pack. But Instagrand, Nolo Contesto and Game Winner only quickened temporarily.

Rather than let Instagrand get a breather, Nolo Contesto, Game Winner and even Synthesis chased him closely throughout, never letting him open up on the far turn. The effort cost Nolo Contesto, though, as he offered nothing in the stretch run.

Game Winner kept fighting and managed to put away a slowly fading Instagrand. Roadster gobbled them all up in a visually-pleasing effort.

For those who still support Game Winner, losing twice is the best scenario for his value, as backers will finally get a small break in odds for the Kentucky Derby.

As for Roadster, a fellow HRN contributor pointed out an interesting statistic that goes against him.

In any case, Roadster and Game Winner belong in the Derby discussion, while Instagrand will probably miss the race on points.

Instagrand ran well over a slower-than-usual Santa Anita main track, but nine furlongs looks like his limit. Perhaps fate worked out for the best, as the long break Instagrand took after August last year prevented him from earning enough Derby points and forcing a try.

If by some chance enough defections happen and Instagrand makes the field, he is still a toss from the win spot.

Tacitus won the Wood Memorial (G2) after a rough first turn, where the eventual runner-up Tax crowded several horses to his right. Or, was it Joevia’s fault outside?

Stewards blamed the latter. Regardless, Tacitus settled into a good position afterward, as did Tax. Both of them took advantage of the massive pace setup by Not That Brady and Joevia.

Tacitus will appreciate an extra furlong next month. But the Wood Memorial always seems slightly weak because most good horses head south for the winter and early spring.

On a positive note, Tacitus does give off the impression of a horse that will grind his way into an underneath Kentucky Derby placing and help out the exotics payouts.

3-year-old sprinters worth a watch

On the Wood Memorial undercard, Mind Control out-finished Much Better in the Bay Shore Stakes (G3). There was no visible excuse for the latter, as he held a comfortable lead and got outrun in the lane. With that said, they both ran well.

If going by the 6-8 day standard intervals, Call Paul showed some missing works on his worktab and he certainly looked short in the stretch run. Watch for him next time.

Mucho, who looked on par with Mind Control last summer, faded with no excuse.

Mind Control and Much Better are the horses Instagrand belongs running against. If all three of them show up in the Woody Stephens Stakes (G1) in June, it will make for an exciting race.