What we learned: Mishriff earned his Saudi Cup win 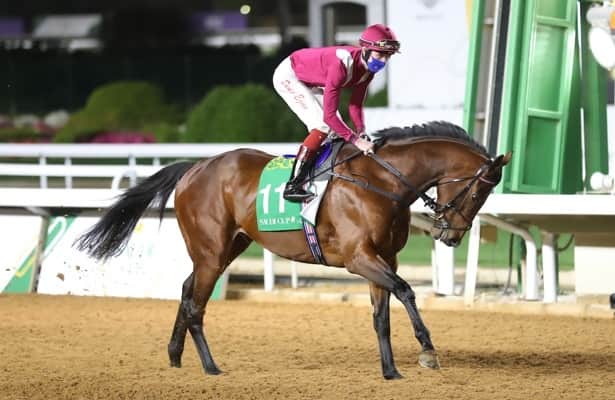 Some mistakes on this blog were made when handicapping the Saudi Cup card at King Abdulaziz Racecourse. It is a traditionally difficult set of races because of the many unknown class factors of local horses and international shippers. Next year, the better plan is likely to put all the focus on the Saudi Cup itself and get to know the unknown horses.

One of the European contenders did pop the upset over the Americans — Mishriff. He is a 4-year-old son of Make Believe who won the 2020 Prix du Jockey Club (G1), among other races, and who ran second in the previous Saudi Derby to Full Flat.

In the replay, Mishriff is easily seen between Military Law and Extra Elusive as Charlatan secures the lead and Knicks Go backs off him.

Fractions are not used in overseas races.

Approaching the turn, Knicks Go challenges Charlatan for the lead, and even briefly takes it before Charlatan responds back. The problem is that the leading duo never separates from Mishriff, who sticks about a length behind the dueling top pair.

As they straighten out, Charlatan leads again, while Knicks Go calls it a day and steadily fades. Mishriff takes aim at Charlatan while racing on his wrong lead.

Under heavy urging from David Egan, Mishriff gradually passes Charlatan late and pulls ahead to win by one length.

Great Scot closed for third. Knicks Go’s winning streak came to an end, as he crossed the wire a tired horse in fourth. A fellow American and big long shot in Sleepy Eyes Todd managed to pick up fifth.

Even though it took effort for Mishriff to pass Charlatan, Mishriff earned the win. From a pace standpoint, he stayed close enough to both Charlatan and Knicks Go, which means that if the pace did go fast, Mishriff had to endure some of the fast pace too.

Military Law and Extra Elusive, the two horses surrounding Mishriff in the opening quarter, offered no punch late, with the latter completely folding. Tacitus held a good position on the inside, but he had nothing left when switched out on the turn.

Given those facts, the pace was probably at least moderate, if not fast. Knicks Go tiring late works as another clue. But again, in overseas races, it is not easy to tell without fractions or pace figures.

Mishriff still had enough left to mow down Charlatan, with some work.

Considering the raw talent of Charlatan and how he crossed the wire first in four previous starts, including the Arkansas Derby (G1) and Malibu Stakes (G1), it should take some work to defeat him. Mishriff beat one of the best dirt horses in North America.

With this kind of effort, Mishriff’s trainer, John Gosden, might want to think about aiming for the Breeders’ Cup Classic in November.

As for Charlatan, he loses nothing in defeat. Remember, he did set the early pace and withstood the challenge of Knicks Go on the turn. Other than losing, there is nothing to knock. Expect him to capture Grade 1 races back in America.

Great Scot proves that not all local Saudi-based horses are tosses.

Knicks Go crossed the wire fourth, although he certainly worked harder than Great Scot in third. He might need a rest. Once he is entered in a race without any other pacesetter again, he will win.

Once again, Sleepy Eyes Todd showed a lack of speed and initially traveled behind the pack of horses in 12th. He closed moderately for fifth but never threatened. In longer route races, he would benefit from learning how to use his old speed again.

Military Law offered little in the stretch after chasing the leaders closely. But as stated above, he possibly endured a fast (or moderately fast) pace and became tired. If the connections point to the Dubai World Cup, he might factor there.

Tacitus turned in a poor race for seventh. As stated above, he settled into a good position behind the leaders and tipped out to position himself for a last strike but came up empty. Even though Tacitus almost never wins, this looked like one of the worst efforts of his career.

He had never finished worse than fourth in America, and he ran a credible fifth in Saudi last year. Even as a prep race, Tacitus deserves criticism for this effort when analyzing him for the Dubai World Cup.


As for Soft Whisper’s effort in the Saudi Derby, there is not a lot to write about her loss other than that she settled into a perfect spot and offered nothing late.

On the turn, she then briefly took the lead.

But the Japanese colt Pink Kamehameha always had Soft Whisper measured and passed the filly in the stretch run. He eventually won by 3/4 of a length.

Cowan closed late for the runner-up spot after taking a while to set up his final run. He turned in a good effort against this field after runnng awkwardly in mid-stretch. But the race did nothing to bring up his status relative to the better 3-year-olds over here in America.

New Treasure crossed the wire third, while Rebel’s Romance started to hang in the stretch, but he barely picked up fourth over fellow Godolphin runner Soft Whisper.

It turns out Soft Whisper’s easy win in the UAE 1000 Guineas was a mirage. At a minimum, she needs to return to her own gender if she runs on the Dubai World Cup undercard.

How good is Pink Kamehameha? Given Cowan was previously crushed by horses such as Caddo River and Señor Buscador in the States, Pink Kamehameha is probably a step lower than the best Americans as well.

With that said, Pink Kamehameha would find a welcoming audience of fans who love Japanese stars if he ever found his way over here.