What we learned: Is Anneau d'Or's future back on turf? 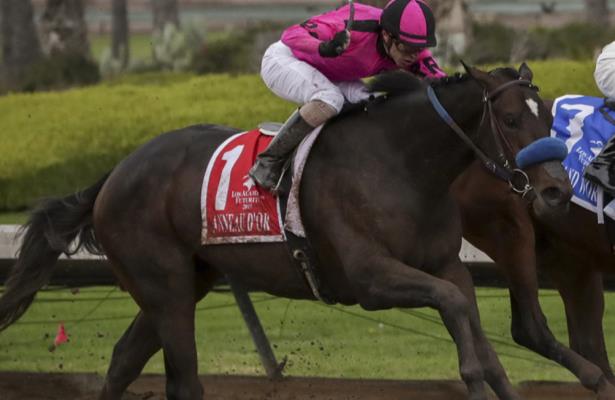 While Mr. Monomoy took a step forward in the first division of Saturday's Risen Star Stakes (G2), Anneau d'Or went back one race later when off as an even-money favorite in the weaker of the two lights.

Anneau d'Or's trip is worth a second look considering how high he stands on many 2020 Kentucky Derby lists. The excuses appear only minor, though, in nature as Modernist put his name in the Derby mix with a victory at Fair Grounds.

Approaching the first turn, Anneau d'Or faced traffic when a difficult-to-handle Liam's Lucky Charm came out and forced him wide.

For the entire backside, Anneau d'or continued to run wide and in mid-pack. In the second turn, Anneau d'Or went about five wide again.

Despite some right-handed reminders from new jockey Joel Rosario, he then steadily lost ground. Anneau d'Or finished ninth by 12 ¾ lengths.

Perhaps the addition of blinkers negatively affected Anneau d'Or. But the fact remains that after three tries, this horse lacks a dirt win. His debut score came on turf at Golden Gate.

Anneau d'Or did run second in the Breeders' Cup Juvenile in career start No. 2. But in hindsight, was that a strong race? Storm the Court finished a flat fourth in the San Vicente Stakes (G2) last weekend, while the fourth-place Scabbard has failed to hit the board in two subsequent starts, including a non-threatening sixth Saturday in the Risen Star's first division.

Anneau d'Or will get another chance to earn his Derby points back in California in the Santa Anita Derby (G1). There, he'll have to prove his talent in an even classier spot -- or perhaps look to shift back to a career on turf.

To touch upon Modernist, this is a regally-bred son of Uncle Mo whose dam, Symbolic Gesture, is a half-sister to Life Is Sweet, the 2009 Breeders' Cup Distaff winner. Modernist is the type of horse bred for the 1 ¼-mile distance.

The one question is whether he can progress fast enough in the next few months. He did run almost a second slower than first division winner Mr. Monomoy.

With most of the Risen Star's first division betting falling towards Enforceable and Silver State, Mr. Monomoy became the forgotten horse on Saturday at Fair Grounds.

It was only a month ago that he finished a good third in the Lecomte Stakes (G3), 1 ¾ lengths behind Enforceable and a neck behind Silver State. Yet, bettors let him go at 7-1, while those two started at 3-1.

The half-brother to Monomoy Girl proved his doubters wrong, continuing to progress with a decisive 2 ½-length win. And given the way Mr. Monomoy won, he merits respect on his own name.

Mr. Monomoy broke sharp and went for the lead, forcing Blackberry Wine and Ready to Roll to take back slightly in order to avoid a duel.

However, Blackberry Wine did not let Mr. Monomoy coast alone, as he tugged jockey Adam Beschizza near Mr. Monomoy. As that happened, Digital chased along the inside in third and Ready to Roll settled in fourth.

Approaching the far turn, Mr. Monomoy still dealt with pressure from Blackberry Wine, who moved up outside to head him. Once Blackberry Wine reached equal terms at the top of the stretch, though, he stalled.

Mr. Mononmoy turned back Blackberry Wine, who steadily faded back to seventh.

By mid-stretch, Mr. Monomoy also faced oncoming moves from Silver State and Enforceable. Both of his former Lecomte foes had clear shots to move forward and pass. Mr. Monomoy kept finding more though.

In the end, Mr. Monomoy earned a 92 Beyer Speed Figure, which is competitive so far in this crop. He also finished nine furlongs in 1:50.43, faster than Modernist's second division time of 1:51.28.

Enforceable will always grind his way into the mix with his closing style and sometimes win depending on the pace. As usual, he is a mild threat moving forward. Silver State remains in the Derby picture, too, but it is a concern he broke well and did not improve. Enforceable out-kicked him in the lane.

As for Blackberry Wine, he disappointed at 4-1. The main question for him was whether he could sit off other horses if necessary, as opposed to setting the pace uncontested. Beschizza put Blackberry Wine into the presser role, and he folded in the stretch run.

Was it only the change in race dynamics though? According to Daily Racing Form reporter Marcus Hersh, Blackberry Wine tested positive for a banned substance in his local Jan. 18 allowance optional claiming win. It's reasonable to wonder if his performance was enhanced.

Right now, Mr. Monomoy doesn't look the best 3-year-old out there. But he certainly garnered respect Saturday, along with the points necessary to run on the first Saturday in May.

Finite took a step forward after her hard-fought Silverbulletday Stakes win a month ago, leaving no doubt this time by taking the Rachel Alexandra Stakes (G2) yesterday by 4 ¾ lengths. The win marked Finite's fifth win in seven starts and second graded stakes victory in as many tries.

Ricardo Santana Jr. gave a great ride. From Post 7, Santana Jr. asked Finite to get into position and she settled three-wide alongside Ursula.

As that happened, British Idiom meandered four-wide in sixth.

On the far turn, Finite moved right outside of His Glory in striking position. British Idiom began to move, too, but she needed to go four-wide again.

His Glory continued to fight on for a little bit longer, but Finite had her measured in the stretch run and she responded under moderate urging from Santana. Finite drew clear to win with authority, as British Idiom stalled late and suddenly found herself fighting off Swiss Skydiver for second.

Finite deserves credit for getting the job done more often than not. She also left no doubt with the margin here, unlike in the Silverbulletday Stakes.

British Idiom experienced some minor trouble though off the layoff. With the champion's return race in tow, expect her to improve next time.