What we learned: Medina Spirit ready for next step 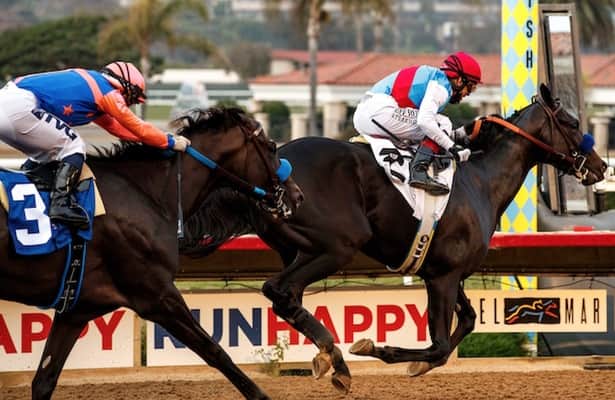 While Medina Spirit did not blow anyone away with his winning effort in the Shared Belief Stakes at Del Mar yesterday, he gave enough indication that he looks ready to take the next step and face Grade 1 horses again.

During the race, doubt crept in on the far turn as to whether Medina Spirit could prevail. The Kentucky Derby winner was starting to lose control of the lead. Then again, maybe he became lazy and only wanted more competition, as he somehow found one more gear in the stretch.

Once Rock Your World and Team Merchants lined up to his side, he rebroke.

As Medina Spirit took back control, Rock Your World came out and Team Merchants bumped into Stilleto Boy while both horses lost momentum.

The separation Medina Spirit created is important, because Rock Your World tried to rally back in mid-stretch while running on the wrong lead. Despite the threat from Rock Your World, Medina Spirit had enough of an advantage and held on to win by 1 1/4 lengths under urging from John Velazquez.

Medina Spirit’s return win is perfectly acceptable for a return race. Some comments out there mock the horse for winning an ungraded stakes race in a mild fashion. Why? A spot like the Shared Belief is not meant to showcase Medina Spirit’s full talents. Rather, the race gave Medina Spirit the chance to show trainer Bob Baffert whether he could take the next step and compete against Grade 1 foes next time or if his fitness level is not there yet.

The evidence points to a green light.

In handicapping, the common rule is to expect a horse to move forward in either his second or third start off the layoff. If the first race back is a clunker, it is forgivable. But Medina Spirit did not even need to run a clunker first. He won his return, and arguably it was not a slow win.

At least one speed figure says Medina Spirit ran a fast race, even with the layoff hampering him. Medina Spirit shows a 100 Beyer Speed Figure for the Shared Belief victory, which is not far off what he needs to win the Pennsylvania Derby (G1) or the Awesome Again Stakes (G1) against older horses. He only needs one more reasonable step forward in his second race back.

There are some grumblings about the slow final quarter from Medina Spirit in the Shared Belief, but a slow finish is reasonable as long as he ran fast in the early part of the race. Considering the opening quarter 22.52, Medina Spirit had a right to get tired. A slow finish does not always mean a bad race, especially with pacesetters. They "win" the race before mid-stretch by opening up.

Plus, he won by 1 1/4 lengths Sunday over a solid group of runners for an ungraded stakes race, including the Santa Anita Derby (G1) winner Rock Your World, the recent Iowa Derby winner Stilleto Boy and two promising Doug O’Neill trained 3-year-olds in The Great One and Team Merchants.

When an ungraded stakes race for $100k contains both the Kentucky Derby and Santa Anita Derby winner, it is a great race for the level.

From only a race analysis standpoint, there is no reason to doubt Medina Spirit as a legitimate contender at the top level moving forward. In eight career starts, this colt shows four wins and eight top-three finishes. Expect him to move forward off the 100 Beyer Figure wherever he starts next.

Should Rock Your World return to turf?

Here is a separate conversation on Rock Your World.

When this colt made the switch to dirt in the Santa Anita Derby and won, some observed that he took advantage of a biased track. As time goes on, it does look like his Grade 1 win was the product a great trip.

His bad start is notable in the Kentucky Derby, but he never tried to make a significant move forward once he started running in the clear. Then in the Belmont Stakes, Rock Your World was cooked while trying to chase Hot Rod Charlie through grueling opening fractions. Although the Belmont Stakes effort is not terrible and neither is his runner-up in the Shared Belief, maybe dirt is not for him.

Rock Your World broke his maiden by 1 3/4 lengths in a turf sprint and then won the Pasadena Stakes by 2 1/4 lengths. On turf, those are great winning margins as each length is more significant in terms of handicapping. Turf racing tends to lead to clustered finishes and small margins between horses, which means two or three lengths is arguably a dominant margin.

If Rock Your World continues on dirt, he likely would run respectable races. At some point, maybe he could win another graded-stakes race if it developed in his favor. He seems to run better on dirt with the lead.

But why take him down this path when he could develop into a top turf miler instead? Hronis Racing already owns a Breeders’ Cup Classic contender in Tripoli, who won the Pacific Classic (G1) in his first start at 1 1/4 miles on dirt.

Also, Rock Your World’s running mechanics in the stretch are a bit sloppy. He did not switch leads until too late in the Shared Belief, and in other races he makes multiple lead switches. But that is how some good horses run.

Rock Your World is a good horse. He just seems like a better turf horse.