What we learned: Medina Spirit excels on lead in Derby victory 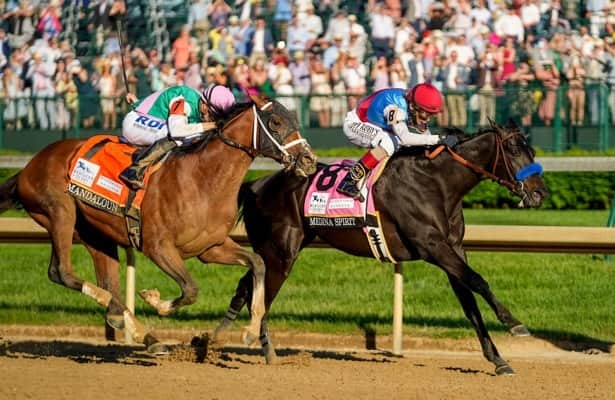 Once again, trainer Bob Baffert sent a good speed horse to the Kentucky Derby at Churchill Downs and took home the trophy in gate-to-wire fashion. After capturing the race last September with the front-running Authentic, this time he won with Medina Spirit, a horse with a unique pedigree and lesser following than many of Baffert’s past Derby champions.

Despite never finishing out of the exacta in five starts, including four graded stakes races, the public let Medina Spirit start at a generous 12-1. As Baffert has shown over and over in major stakes races, though, his horses become dangerous when left alone on the lead. In addition, the points-era version of this race began to heavily favor speed in recent years.

Although 12-1 was lower than Medina Spirit's morning line of 15-1, it felt generous.

Medina Spirit’s jockey, John Velazquez, gave this horse conservative rides in his last two starts, which led to a second-place finish in the San Felipe Stakes (G2) behind stablemate Life Is Good and another second in the Santa Anita Derby (G1) behind Rock Your World, who started in the Kentucky Derby as the second choice. Yet those two losses arguably led to the switch in Medina Spirit's strategy for the Kentucky Derby.

After breaking well, Velazquez let Medina Spirit go to the lead this time.

In contrast, Medina Spirit’s rival Rock Your World began a step slow, which led to Highly Motivated and Essential Quality giving him trouble.

With Rock Your World taken out of the picture at the start, Medina Spirit made his way to the front with no real problems. Soup and Sandwich also came away eager and briefly gave the impression he might give Medina Spirit a real contested pace. Jockey Tyler Gaffalione took a small step off the gas pedal, though, and gave the pacesetter about a half-length of breathing room.

Right behind Medina Spirit and Soup and Sandwich, Helium took the outside stalking position and Mandaloun slid into the pocket while saving ground on the first turn. Following the top four, Hot Rod Charlie, Essential Quality, Sainthood and Highly Motivated kept within range.

Medina Spirit led through an opening quarter in 23.09 and half-mile in 46.70. For a normal 1 1/4-mile race, those are fast fractions. Relative to the history of the Kentucky Derby, though, opening fractions of 23 and 46 and change appear mild enough to favor the front, especially in a 20-horse field with traffic.

As they began to round the far turn, Medina Spirit hit six furlongs in 1:11.21. At that point, it felt certain he had more left in his tank.

Once Soup and Sandwich threw in the towel, Mandaloun went up to challenge Medina Spirit for the lead. Hot Rod Charlie and Essential Quality winded up their runs outside of the leading pair as well, and suddenly it became a contentious race capable of going four ways.

In the early stretch, it became clear the three horses on Medina Spirit’s outside needed more to pass him. Although Medina Spirit did not pull away from the three runners, he took on Mandaloun’s challenge with his own resilience and held his half-length advantage until the wire.

Medina Spirit won over Mandaloun in 2:01.02 while earning a 122 TimeformUS Speed Figure and 102 Beyer Figure.

Hot Rod Charlie was only a length behind Medina Spirit in third, while Essential Quality had to settle for fourth after stalling in mid-stretch.

Betting aside, Medina Spirit ran a great race. He dealt with the speed of Soup and Sandwich in the early stages before putting him away and tackling the late punches of Mandaloun, Hot Rod Charlie and Essential Quality. From a flow standpoint, it was like his victory in the Robert B. Lewis Stakes (G3) in February.

On the negative side, it looks likely that Medina Spirit can win only on the lead and not as a presser or stalker. When put on the lead, he fights until the end, but that makes him one-dimensional and subject to a speed duel in the future if another brave horse decides to commit pace suicide. To counter that point, many connections are reluctant to get into a speed duel.

If Medina Spirit enters the Preakness, handicappers need to ask themselves if he can secure the lead without hassle.

• It looks obvious now that Mandaloun threw an odd clunker in the Louisiana Derby (G2). Think of the effort at Fair Grounds as an outlier. He came back firing in the Kentucky Derby. With that said, Mandaloun had the entire stretch to pass Medina Spirit and failed.

• The same criticism applies to Hot Rod Charlie. As in the Robert B. Lewis Stakes (G3), Hot Rod Charlie took aim at Medina Spirit in the stretch run and could not pass him nor even finish second. For those who bet him both times against Medina Spirit, that is frustrating to watch a second time.

• Essential Quality hung. Although the middle part was the right place in the stretch, he could not finish off the job either and even began to wander right briefly before Luis Saez put him back on the proper track. He is a good horse who belongs in these races. But bettors need to demand some kind of value off this effort. There is no reason to take another short price, given he disappointed bettors after running as the 5-2 favorite.

• O Besos had the leaders within range on the far turn and faded. One possible explanation is that he tried to make his run on the rail, while most jockeys avoided rallying inside in the past two days. As harsh as this sounds, perhaps O Besos needs a big-time jockey for major races.

• Despite missing the board this time, Midnight Bourbon continues to run well. Jockey Mike Smith made a brief attempt to hustle Midnight Bourbon out of the gate. However, Hot Rod Charlie still outbroke him, while Dynamic One came in for a bump. At that point, Smith took hold of his mount as the horses on the outside began to form a barrier. Considering Midnight Bourbon was out of position, he ran well for sixth.

• Keepmeinmind told his followers exactly that, as he rallied from last to seventh while losing sixth place to Midnight Bourbon by only a neck. After dull efforts to start off his 2021 champagne, he is possibly a player now while moving forward to the Preakness, Belmont and summer races.

As a last point, it seems clear that the modern Kentucky Derby fits Baffert’s style of using speed and controlling the pace. Many connections are too afraid to play aggressively in a 1 1/4-mile race, but Baffert avoids all the traffic and chaos by aiming for the front if his horse owns the speed.

In this case, Medina Spirit possessed the high TimeformUS Pace Figures of 151 and 151 from his Robert B. Lewis Stakes effort and the second-highest overall TimeformUS Speed Figure of 120 from his San Felipe run.

Before Baffert’s career is over, expect many more Kentucky Derby wins. He might even win another Triple Crown or two as the good horses keep flowing into his barn. His mind is just a step ahead of other trainers when it comes to strategizing for this race.

Prospect Watch: 4 well-bred juveniles at Belmont, Santa Anita
The two or three weeks leading up to the Breeders’...